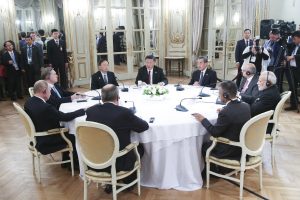 Leaders of China, Russia and India had an in-depth exchange of views on cooperation among their countries under new circumstances at an informal meeting held on Nov.30 the sidelines of the Group of 20 (G20) summit.

Xi pointed out that China, Russia and India are all major countries of important influence, and they are each other’s important strategic cooperation partners.

The three countries have extensive common interest and similar development goals, and bear great responsibility for the future of the region and the world as a whole, Xi said.

Common development and close cooperation among China, Russia and India under current circumstances have become an increasingly important force for stability and certainty in the transformation of the world landscape, Xi said.

In the past over 10 years, Xi said, the three countries have actively conducted trilateral dialogue and cooperation in the spirit of openness, unity, mutual understanding and trust, and have made important progress.

He called on the countries to further advance trilateral cooperation in the face of fresh challenges.

He suggested that China, Russia and India advocate a new type of international relations, keep consolidating political mutual trust, establish partnerships instead of alliances, and strive for a virtuous cycle in major-country relations and win-win cooperation.

He also called on the three countries to strengthen coordination and cooperation in important multilateral mechanisms including the Group of 20, BRICS and Shanghai Cooperation Organization.

China, Russia and India should advance liberalization and facilitation of trade and investment, promote an open world economy, take a clear-cut stand against protectionism and unilateralism, and jointly safeguard the multilateral trading system as well as the common interest of emerging economies and developing countries, he said.

The three countries, he added, should actively champion a vision of common, comprehensive, cooperative and sustainable security, strengthen regional and global counterterrorism cooperation, promote political settlement of hotspot issues, and play an even bigger part in safeguarding peace and security in the region and the world.

For his part, Putin said Russia, China and India are friendly countries to each other and have developed sound relations based on equality and mutual respect.

Under the current circumstances, it serves the interest of all three countries and bears positive significance on the world that Russia, China and India strengthen cooperation, he said.

He called on the three countries to dedicate themselves to building a fairer and more just international system, promoting world peace and stability, strengthening cooperation in economy and finance and on issues on the G20 agenda, and boosting the synergy between the Eurasian Economic Union and the Belt and Road Initiative.

In his remarks, Modi said it is very necessary for the three countries to compare notes on major issues faced by today’s world.

There are increasing uncertainties on the international horizon, with rising unilateralism and cliquism posing challenges to multilateralism, he said.

Modi said developed countries have failed to meet their assistance commitments to developing countries, and that there is a long way to go before the realization of the 2030 Sustainable Development Goals.

India, China and Russia, as major countries in the world, have the responsibility to maintain close communication, and actively play their parts in safeguarding international and regional stability, promoting economic prosperity, sharing development experience and jointly meeting new challenges, so as to safeguard multilateralism and maintain the multilateral system, he added.

The three leaders agreed to further strengthen the cooperation mechanism among their countries.