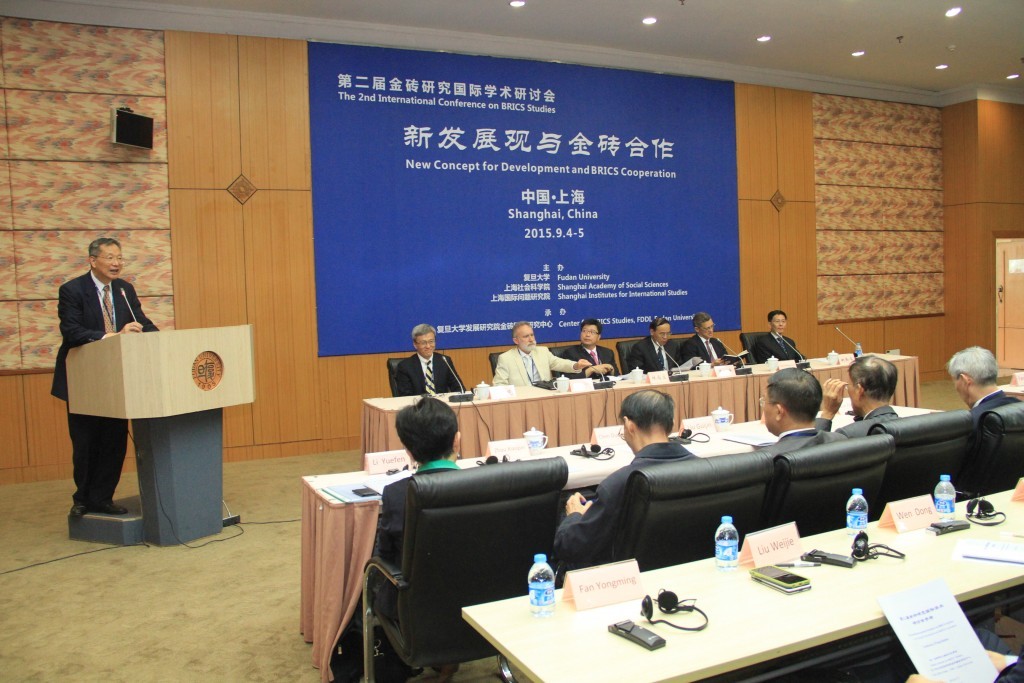 Approved by the Ministry of Education, from September 4th-5th, 2015, “New Concept for Development and BRICS Cooperation” International Seminar was successfully held in Yifu Building of Science and Technology in Fudan University. It was host by Fudan University, Shanghai Academy of Social Sciences and Shanghai Institutes for International Studies, and organized by Center for BRICS Studies, Fudan Development Institute, Fudan University. Coming from Brazil, Russia, South Africa, United Kingdom, Canada, India and China, more than a hundred scholars and officials participated in the seminar. They had an intensive discussion regarding the following topic, such as what is the new concept for Development for BRICS, how to improve the concept, and how to take advantage of the new concept to facilitate development, and etc. All participants achieved agreements that we should systematically summary the domestic development practice of emerging economy represented by BRICS and initiate theoretical innovations; meanwhile, we should deeply discuss the new international development cooperation concept carried by New Development Bank, and based on these, propose the new development concept with the characteristics of BRICS.

Dr.Rosinha Florisvaldo Fier, who is high representative-General of MERCOSUR first introduced the basic information of MERCOSUR. It is the largest economical organization in South America region, and also is the first shared market only formed by developing countries, including Argentina, Brazil, Paraguay, Uruguay, Venezuela and Bolivia totally six countries, which is regarded as the fifth largest economy in the world. Dr. Rosinha also pointed out that the rising power such as China not only brings opportunities to Brazil but also win positive response from MERCOSUR. The diversity in the field of geography, economy, social and culture of BRICS is an advantage, and the advantage along with the importance of these countries provides sufficient legitimacy for BRICS’ actions. It is because that the BRICS represent the voice from 3 billion people, four continents, diverse culture as well as the new engine of global economy.

Mr. Ai Ping, the former Vice Minister of International Department in Central Committee of CPC pointed out that since the domestic situations of BRICS vary, the developing path and idea should also be different. The so-called New Concept for Development should root in the conditions of BRICS, while at the same time it is needed to enhance international cooperation, creating opportunities to join in the global value chain.

During the meeting, Fudan University, Shanghai Academy of Social Sciences and Shanghai Institutes for International Studies established Shanghai Community for BRICS Studies and published “Initiative on New Concept for Development and BRICS Cooperation”.

The initiative argued that “independence, equality, inclusiveness and green” are the essence of the New Development Concept for BRICS. Independence means to choose development path, development model and development goal independently. Equality consists of two aspects, which are internally to treat all economic entities equally, and externally to participate in the international economic competition equally. Inclusiveness is that the competition between emerging economy and developed countries are inclusive competition rather than zero-sum game, and the results of competition is to increase and promote the welfare of the entire international community. Green is referred as pursing the sustainable development, achieving the harmony between people and environment as well as people and society. Shanghai Community for BRICS Studies argued that it is urgent for us to focus on the practice of emerging economies’ development, summarizing its new development path and development experience; meanwhile, based on AIIB and NDB, we can explore the new aid policies for international development. All above can be regarded as the New Development Concept. 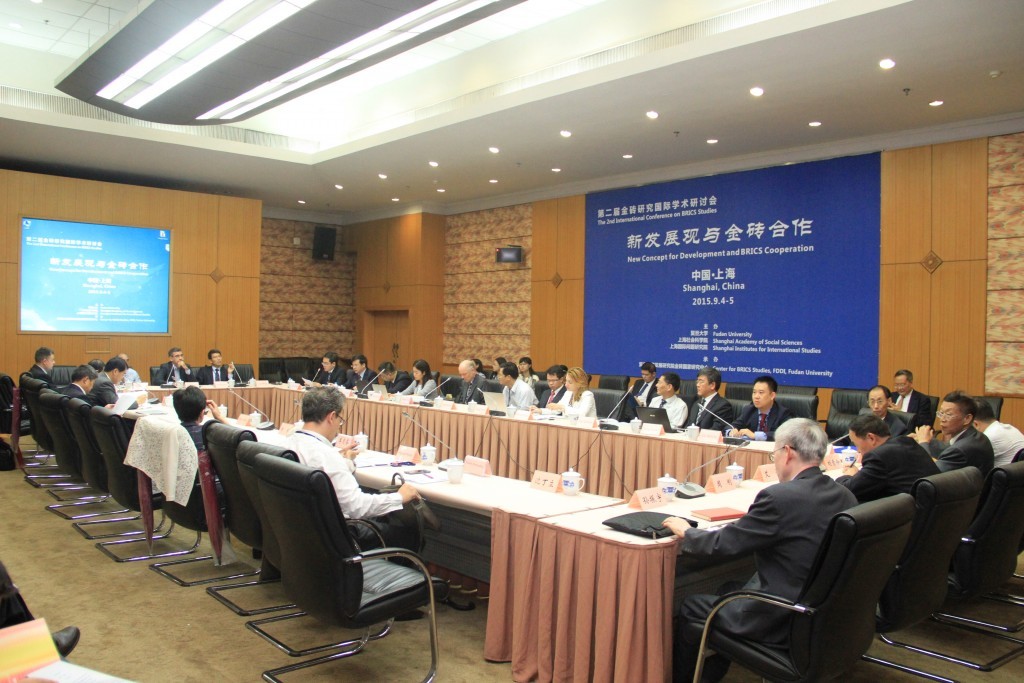 The New Development Concept proposed by Shanghai Community for BRICS brought heated discussion among participants. Scholars generally believed that though the development practice of BRICS is far beyond the mutual stage, facing the pressure from severe economy slowdown and all kinds of challenges, it represents the emerging power of global governance and the new trend of development. Chinese former Ambassador to WTO, former Vice Minister, Ministry of Commerce Sun Zhenyu emphasized that the so-called “New” also includes providing new idea. He said “BRICS should contribute its own wisdom and propose its own program in order to play an increasing role in global governance.”

Vice President, China-Latin America, Emerging Economies Research Association Jiang Shixue claimed that the development of BRICS, besides the breakthrough of the construction of mechanism, can’t “put all eggs in the same basket” in terms of cooperation fields; while it must select several priority fields among all proposals.

Head of the Training Department, German Development Institute Thomas Fues argued that BRICS should work on collective contributions to global strategies for sustainable development, and provide global public goods. BRICS should also make their own voice heard and enhance their influence in the following global issues, such as climate change issue and the refugee issue.

Special Advisor on Economic and Development Finance from the South Center Li Yuefen, Vice Rector of Ural Federal University Maxim Khomyakov, Director of BRICS Research Group of Munk School of Global Affairs of University of Toronto John J.Kirton, and etc. emphasized on the relationship between the New Development Concept and education. They thought the New Concept for Development should also contain sustainable development and balanced development, and it is requited that BRICS carry out extensive cooperation in the field of education and science. Furthermore, some scholars also indicated that in the near future, BRICS should also spend much effort on innovation of new cooperation model, co-ordinate and promote reform within and outside the country.

Although BRICS currently are facing the pressure of severe economic slowdown, it won’t change the fact that the fundamental of BRICS economy is good, let alone hamper the process of global economic governance reform promoted by BRICS. Hence, it is not only necessary to study the New Concept for Development of BRICS, but also has great significant practical meanings. Shanghai Community for BRICS Studies welcomes more scholars and research institutes to join in and promote BRICS study.