The BRICS of Ufa Summit and the Expansion of the SCO 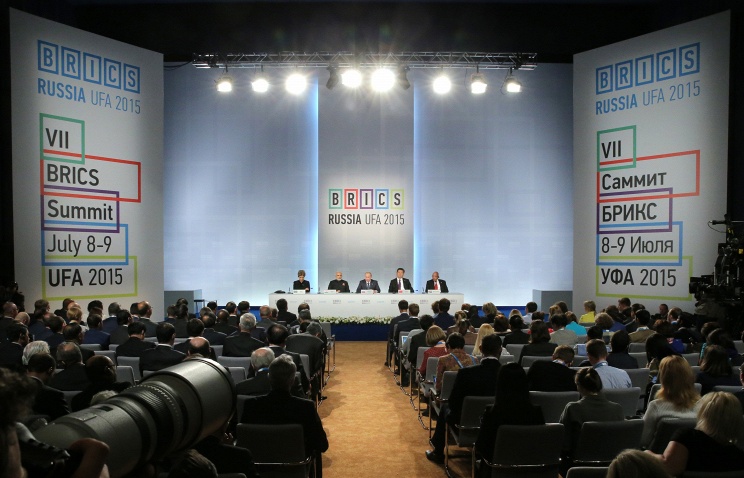 During the Ufa summit the leaders of the member States of BRICS (Russia, Brazil, India, China and South Africa) and the Shanghai cooperation organization (SCO) held a numerous number of meetings.

The BRICS summit was held in the Bashkir capital on July 8-9 and July 10 the SCO summit. Russia, as a hosting country in both organizations, decided to combine these activities.

Documents of the BRICS summit contain a specific agreement on development and strengthening of the international status of this Association, – Vladimir Putin said at the final press conference in Ufa.

“The beginning of our work with financial institutions, the New Development Bank (NDB) and a currency reserve pool – with a total capital of $200 billion,” – said the head of Russian Federation.

The general approaches on the major issues of international policy were reflected in the final Declaration of the BRICS summit.

BRICS leaders expressed the need in further strengthening of multilateral approaches to global issues, strongly recommended the UN and the IMF to accelerate its financial reforms, spoke out against double standards and unilateral sanctions, resolutely condemned the crimes of the terrorist group “The Islamic State of Iraq and the Levant” (ISIL) and urged the parties of the Ukrainian conflict to abide by the Minsk agreement.

Another important document, under the Russian initiative, was strategic economic partnership of the BRICS countries by 2020.

The head of the Russian Federation, Brazil, India, China and South Africa signed an Action Plan, specifying the BRICS countries work for the coming year and new promising areas of cooperation.

The foreign Ministers of the BRICS countries signed a Memorandum on establishing a joint internet site – Virtual Secretariat of the Association.

Further expansion of the SCO

Leaders of the Shanghai cooperation organization signed a decision to commence the expansion of the organization.

The President of the Russian Federation Vladimir Putin, stressed that, by the summit in Ufa a new stage was opened in the development of the SCO – “for the first, time during the existence of the Organization, we started the procedure of admission of new members – India and Pakistan”. According to the head of the state, the expansion of the SCO should help resolve the disputes in the region.

Membership of India and Pakistan in the SCO will be finalized by the next leaders meeting. The SCO leaders unanimously adopted the decision on granting Belarus the status of observer in the organization.

A new status in the SCO received Armenia, Azerbaijan, Cambodia and Nepal, which became, in turn, the dialogue partners in the organization.

“The accession of a new members and further expanding of cooperation with observer states and dialogue partners has crucial importance to the development of the organization, contributes to the increase in its potential,” – said in the final Declaration of the SCO summit.

The SCO and the “New Silk Road”

Member States of the SCO supported China’s initiative on the creation of the “New Silk Road”. This infrastructure project must link the Chinese market with the markets of Asia and Europe.

The SCO leaders also approved the Strategy of the SCO development until 2025 and the Program of cooperation of the States members of the Organization in fighting against terrorism, separatism and extremism in the years 2016-2018.

“Marathon” of the heads of states

Ufa agreement of India and Pakistan

On the sidelines of the SCO summit the Prime Ministers of India and Pakistan, Narendra Modi and Nawaz Sharif, agreed on cooperation on total eradication of terrorism. Modi also accepted the invitation to visit Pakistan in 2016 to participate in the next summit of the South Asian Association for regional cooperation. The last time the premiers of the two countries met in August 2014.

Iranian issue on the background of the Vienna talks

Iranian President Hassan Rouhani spoke in Ufa before the heads of the SCO, BRICS and the Eurasian Economic Community.

Rouhani noted that the summit in Ufa takes place simultaneously with the completion of the negotiations in Vienna between Iran and the “six” (five permanent members of the UN Security Council and Germany), leading up to the conclusion of a final agreement on the nuclear issue of the country.

The Iranian President expressed confidence that the lifting of sanctions will allow Iran to become more open to cooperation with the world associations.

On the sidelines of the summits in Bashkortostan, Rouhani held talks with the Russian President. The two leaders discussed expanding cooperation in nuclear energy between countries and mentioned the topic of military-technical cooperation. Russian President expressed hope for a fast compromise solution in resolving the Iranian nuclear issue.

In the framework of the summit Rosneft and Indian Essar Oil signed a long term contract for the oil supply to India. The contract provides oil supply of 100 million tons of oil within 10 years.

Not a field for geopolitical games

Russian President, at the official reception in honor of heads of delegations of the summit, said that Russia sees the main significance of working with partners in the BRICS and the SCO in ensuring the safety, predictability and prosperity in Eurasia.

“For us this is not a chessboard, not a field for geopolitical games. This is our home, and we all want peace and economic prosperity in this home. That there was no place for extremism and any kind of attempts to ensure its interests at the expense of others,” – said Putin.