On December 5, 2018, the first round of the Silk Spice Road Dialogues convened in Beijing at the UNDP China office and Center for China and Globalization（CCG）office with the UNDP, CCG and Himalayan Consensus as the co-hosts. Nicholas Rosellini, UNDP China Representative, Nirupama Rao, former Indian Foreign Secretary and former Indian Ambassador to China, US and Sri Lanka, CCG President Dr Wang Huiyao, Himalayan Consensus Institute founder Laurence Brauhm, Himalayan Consensus Institute Secretary-General Sujeev Shakya and over 20 experts in the fields of foreign policy and global governance to discuss and exchange views on China-India relations, bilateral cooperation and challenges in the Himalayas, and cooperation between the two countries in addressing climate change. 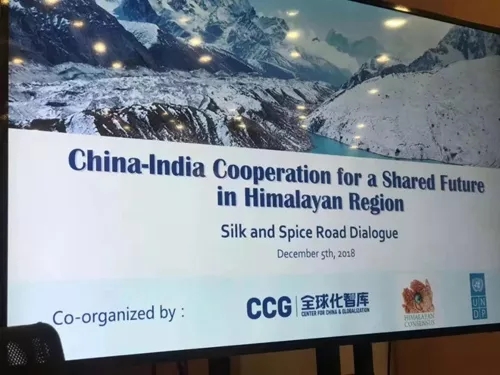 The concept of Silk Spice Road Dialogues was first initiated during the Himalayan Consensus Summit 2017 by Ambassador Sun Yuxi of China, and Professor Mahendra Lama, Member of Eminent Persons Group from India on Nepal-India relations. They articulated the need for a BNR platform seeking commonalities on shared interests and preventive measures for potential stresses.

The Silk Spice Road Dialogues, conceived at the 2018 Himalayan Consensus Summit held in Nepal, were established as a UNDP-Himalayan Consensus initiative to promote policy dialogue among nations of the Belt and Road Initiative (BRI) in the interest of enhancing collaborative synergies. With CCG perfectly placed to host and organize the dialogue, as a leading non-government think tank in China and key proponent of Track II diplomacy.

Proceeding the first session on December 5th Laurence Brahm, founder of the Himalayan Consensus, welcomed distinguished guests and expressed the great significance of non-governmental platforms in solving challenges like those seen in Sino-India relations, and his hope that this dialogue would be an example of further communication and cooperation the relationship and region requires.

In his opening remarks, President of CCG Dr Wang Huiyao, noted that although Sino-Indian relations have seen a positive turn of late, there are still challenges that exist, and that this forum is ideally placed to discuss such issues and work towards strengthening cooperation on shared concerns between the two nations. Expressing his gratitude towards the distinguished guests, Dr Wang acknowledged that it is key to involve prominent figures not only from government but also academia, business and NGOs in this dialogue. Dr Wang commented that through the combined efforts of these parties, utilizing Track II diplomatic paths via forums and dialogues such as the Silk Spice Road Dialogue, can the right amount of attention and pressure be applied to foster trust and build cooperation between the two nations.

Nicholas Rosellini, the UN coordinator and the UNDP representative in China, in his address, commented that the current global climate change problem needs to be urgently addressed, with the Himalayas being a critical flashpoint for the coming. This is a common problem for human beings that can only be solved through long-term cooperation, he said, and relying on one country alone cannot solve these problems; they can only be resolved through collaboration across borders. At the same time, he pointed out that challenges in global governance rest upon a lack of trust and information sharing. He suggested the establishing of a system for sharing data, push to strengthen cooperation between relevant government departments, NGOs and think tanks, and creating shared knowledge networks.

The keynote speech for the dialogue was delivered by Nirupama Rao, former Indian foreign secretary, former Indian ambassador to China and Sri Lanka. She began by saying that the joint future cooperation between China and India in the Himalayas and the “Silk and Spice Road Dialogue” are of great significance to the promotion of Sino-Indian cooperation. Recognizing the difficulties witnessed in Sino-Indian relations recently, she emphasized the need for these issues to be solved through consultation, not conflict. Ambassador Rao pointed out the long history of the China-India friendship, recommending that the two should focus on what unites them, rather than what divides. Finally, she proposed for the immediate start of the “Himalayan Consensus”, putting forward the need for environmental and technical cooperation, economic initiatives as well as cultural and educational exchanges.

The following day of roundtable discussions found participants debating the key issues facing the Himalayan region. In the morning session, Lou Chunhao, deputy director of the Institute of Marine Safety of China Modern International Relations Institute, expressed his optimism about the development of Sino-Indian relations, suggesting that the two countries establish and promote increased economic and trade cooperation. Tobby Simon, president of the Synergia Foundation, spoke of the long history shared by China and India, expressing the hope that China and India will actively cooperate under the Himalayan consensus to solve immediate problems such as water stress and collaborate on crisis preparedness and management.

In the afternoon meeting, suggestions and solutions corresponding to the conclusions of the previous session were explored. Zhan Hongwei, president of India’s Tata Group in China, expressed his belief that China and India should respect each other’s difference, seeking common ground to promote more exchanges and dialogue in order to establish closer economic relations. In addition, Mr. Zhan Hongwei proposed the development of travel infrastructure between the two countries, such as more direct flights and simplified visa procedures, in order to promote more P2P exchanges. Wang Hongbin, CEO of Euromoney Investment Company, noting that China is the largest holder of green funds, suggested that green finance could be used as an environmentally-friendly investment mechanism in the region. Where Ji Hongbo, the chief representative of the Beijing Representative Office of the Asia Foundation, highlighted the work her Foundation has conducted with China on transparency in overseas investment and business, and the utility of similar programs in fostering trust between China and India.

Bringing the day’s session to a close, Secretary-General of the Himalayan Consensus, Sujeev Shakya, pointed out that the key takeaways from this dialogue centered on the need for the development of knowledge sharing networks focused on the sharing of data relating not only towards combatting environmental issues and crisis management in the region, but also to engage the respective Chinese and Indian populations with each other through cultural and educational exchanges.

On December 6th CCG hosted members of the media in their head offices for a press conference on the dialogue, with key figures from the conference in attendance to respond to questions from the media. Commenting on the previous day’s dialogue, Dr Wang Huiyao noted the significance of the forum in forging a new path for the development of Sino-Indian relations, and the many areas for cooperation highlighted as a result of the in-depth discussion. During the press Q&A session, Ambassador Rao, when asked about the challenges of Sino-Indian cooperation and the role of NGOs and think tanks in Sino-Indian Himalayan regional cooperation projects, she responded that the Chinese and Indian peoples are looking forward to common development, and that is up to NGOs to get involved in this crucial work. She continued to say that in the face of the current challenges, all parties should work together to establish more dialogue and exchanges, helping to eliminate misunderstandings and promote further understanding and opportunities to strengthen cooperation.

Laurence Brahm, founder of the Himalayan Consensus Institute, said that the results of the dialogue will be integrated into a policy proposal for CCG and its Indian counterpart in this dialogue, Synergia, to share with governments respectively. In addition to this, Tobby Simon, director of Synergia, announced that the think tank would host the 2nd Silk Spice Road dialogue in Bangalore in March 2019. Concluding, CCG President Wang Huiyao expressed his high hopes for the future of the dialogue, reiterating the need to foster further cooperation between China and India especially in regards to the Himalayan region.