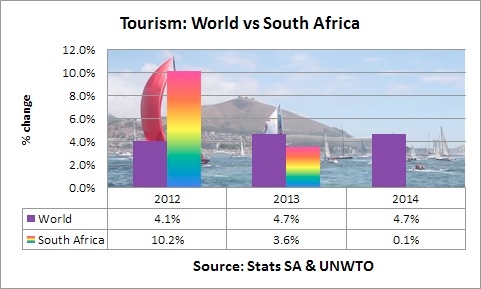 New visa regulations from October 2014 that required an in-person visit for biometric data to South African consulates for visitors from non-visa exempt countries such as China, Russia and India had an impact, but there were other factors at play as only one (The Netherlands) of the Top Ten source countries showed an increase in 2014 compared with 2013.

“We do not know why overseas tourist numbers declined last year. The Ebola scare in the latter part of the year may have had an impact, as we saw declines in overseas visitors from visa and visa-exempt countries. The slowdown in the economic growth rates of our BRICS partner countries may also have had an effect,” Statistician General Pali Lehohla said at the media briefing in Pretoria on Tuesday.

The Department of Home Affairs administers the visa requirements. Several countries such as Brazil and most European countries are exempt from visas provided they stay less than 90 days. Visas are not issued at South African ports of entry, and airline officials are obliged to insist on visas before allowing passengers to board. If a visitor arrives without a visa, immigration officials are obliged to put the visitor onto a flight back to the country of origin. 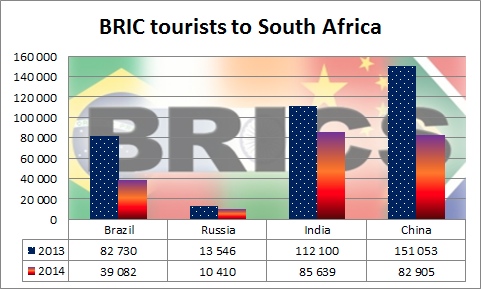 The impact of a slowdown in economic growth may have had an impact on visitors from Brazil, as this country is visa exempt, yet tourists from Brazil plunged by 52.8 per cent to 39,082. South Africa hotel groups such as Southern Sun said the removal of South Africa from Chinese tour operator brochures due to the new biometric requirements probably explain the 62 per cent plunge in Chinese tourists between November 2013 and November 2014. The annual decline was 45.1 per cent for 2014 after a 14.2 per cent increase in 2013.

India overtook China as the leading BRIC source country in 2014 even though India is also not a visa exempt country, as tourists from India travel far less in tour groups, but rather as families and friends, but there was still a 23.6 per cent decline to 85 639 in 2014.

Russia saw a large fall in outward bound tourists due to the Crimea crisis, so the 23.2 per cent fall in South Africa-bound tourists to 10,410 was not surprising. The UK is South Africa’s largest source of overseas tourists with 401,914, but even this was a drop from the 436,599 in 2013.

New immigration requirements that minors need an unabridged birth certificate from 1 June may impact tourist numbers even though less than 6 per cent of tourists are younger than 15 years old.

Data on the June 2015 tourist arrivals should be available in September.

Lufthansa regional manager Andre Schulz told The BRICS Post that Lufthansa passengers had no problem with the new requirements.

Helmo Preuss in Pretoria, South Africa for The BRICS Post