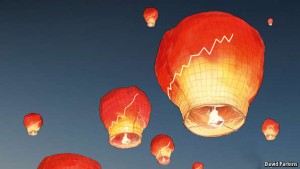 IF YOU were a Chinese worker you could have spent the past year toiling to earn a living. Or you could have bought some shares and sat on the sofa . Chinese equities have been on a bull run of epic proportions. The CSI300, an index of the biggest mainland stocks, has more than doubled over the past year. That looks positively anaemic compared with ChiNext, a market for Chinese startups which has tripled in 12 months; let alone with shares in Qtone, an online-education company that gained almost 1,300% between its listing early in 2014 and the middle of this month. Its own directors have warned investors to be wary of “ignorant hype”.

The signs of overvaluation are everywhere. Stocks listed on the Shenzhen exchange, home to most tech firms, have an average price-earnings ratio of 64; for those on the exchange for small and medium-sized enterprises it is 80. (For most stocks a P-E ratio above 25 is considered expensive.) ChiNext is now priced at nearly 140 times last year’s earnings, a valuation that puts it in the same league as NASDAQ, America’s tech-heavy exchange, at the height of the dotcom frenzy. Companies whose shares are listed in Hong Kong and in Shanghai are trading at a 30% premium in the mainland, near a four-year high. Some are twice as valuable in China, even though mainland money can now more easily slosh southward into the Hong Kong market. 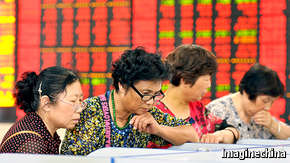 Retail investors, long the “greater fools” of stockmarket booms and busts, are piling in. In a single week in April, Chinese punters opened more than 4m new brokerage accounts. More than two-thirds of newcomers to the market left school before the age of 15, according to one study. Construction companies that have rebranded themselves as high-tech firms have seen their shares double.

The markets are plainly soaring too high. At some point they will crash. Predicting exactly when is a fool’s errand, but the warning signs are accumulating. Recent violent lurches in the share prices of Hanergy and Goldin, two Chinese firms listed in Hong Kong, may have been early signs of trouble. Housing markets in big cities are heating up again: that will probably lead investors to turn away from equities and back to property. Even the Chinese authorities have started warning of risks, though whenever the market has shown signs of correcting in the past they have lost their nerve and talked up share prices. More important than guessing when the crash will come, however, is the question of how serious its economic effects will be. Paradoxically, these are likely to be more damaging over the long term than the short.

The near-term fallout will be painful for some, to be sure. If the market crashes, aggressive investors, whether individuals or firms, will find themselves in trouble. Many Chinese people have bought shares using borrowed money. The amount of margin financing, whereby investors borrow from brokers and put up extra collateral if the price moves against them, has more than quintupled over the past year to 2 trillion yuan ($325 billion). Adding up other forms of debt financing, Credit Suisse estimates that credit-financed share purchases have reached as much as 9% of market capitalisation, five times higher than the level in most developed markets.

Even so, the effect of a correction on the economy will be less dramatic than the bursting of a similar bubble in America or Europe. China’s bourses are small relative to the size of the economy. The free-float market capitalisation is about 40% of GDP; the frothy ChiNext market is worth less than 10% of GDP. In most developed markets the equivalent figure is more than 100%. As a result, the stockmarket bonanza has been less important to China’s growth than often imagined. Many had thought the rally would lead to more consumption as investors felt richer. In fact, households have allocated less than 10% of their wealth to shares.

The mechanics of a stockmarket reversal may also mute its impact. Hong Kong’s markets have no “circuit-breakers”—built-in limits on how far a stock can rise or fall without a suspension of trading—which helps explain the stomach-churning movements in Hanergy’s and Goldin’s shares. By contrast, the mainland market restricts gains and falls to a daily maximum of 10%, which means a downward correction will be a long spiral rather than a vertiginous drop.

More worrying is the lengthy shadow that a crash could cast over the development of China’s equity markets. History does not bode well. After the country’s last stockmarket bust, in 2007, share prices stagnated for nearly seven years. Investors lost faith; regulators slowed, and then froze, listings.

A similar chill today would be far costlier, for two reasons. First, the Chinese economy has depended disproportionately on borrowing in recent years: total debt has jumped from about 150% of GDP in 2008 to more than 250% today. More equity financing is needed to diversify the mix of corporate funding, and to take the pressure off a banking system that is weighed down by dud loans. 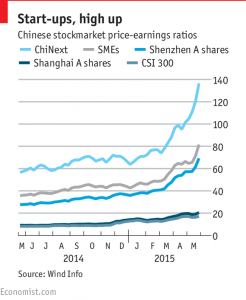 Second, it could slow the pace of financial liberalisation. Chinese regulators have made impressive progress recently—for example, by freeing the rates that banks charge for loans and dangle on savings products, and by relaxing capital controls. A bust might deter them from pressing ahead with more market-based policies.

That would be a mistake. More market reforms, not fewer, are needed to put China’s stockmarket on a sounder footing. Making it easier to short stocks would enable sceptical investors to put downward pressure on ballooning shares. Giving mainland punters more access to foreign stock exchanges would drain some of the speculative cash from China. Speeding up listing processes would ensure that the supply of equities can rise to meet surging demand; otherwise money just chases the existing pool of stocks. China cannot eliminate booms and busts from its financial markets, but it can remove the distortions that make them all too common.

« World Environment Day: 13 Out of World’s Top 20 Polluted Cities in India, Only Three in China» Rahul Likely to Take Over as Congress Chief in September