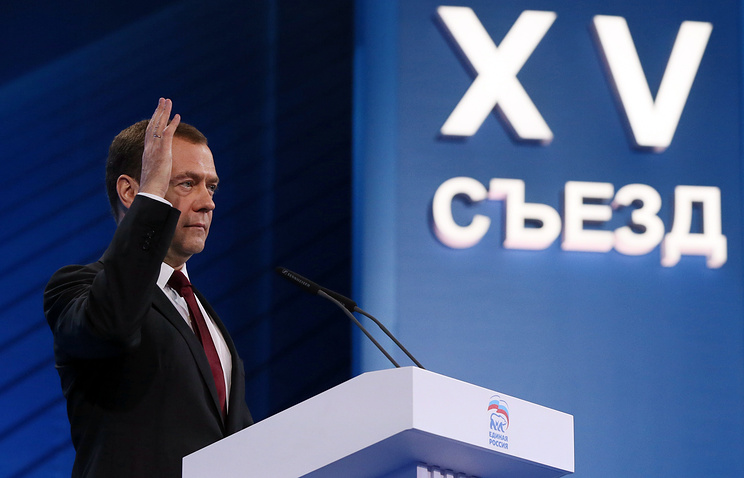 Russian Prime Minister Dmitry Medvedev, the chairman of the ruling United Russia party, announced the intention to develop new strategic development projects similar to national projects of the 2000s, in a wide range of segments from social sphere to propping up small business and exports.

Speaking at the ruling United Russia party’s congress on Monday, Medvedev said that national projects that were launched a decade ago proved to be efficient. “However, progress cannot be put on hold, and we need to develop new strategic projects,” he said. According to Prime Minister, some of the projects will be tied with the development of sectors covered by previous national projects, “but this is not going to be a replay of the old, the point is to work in the areas lacking either managerial decisions or finances.”

Also, Medvedev, said, “it is necessary to see about the infrastructure of the economy itself.” “It has been suggested to enlist a whole range of new areas, which are of systemic nature for the economy,” he said, adding that the issue is about international cooperation and support of exports, the creation of high-performance workplaces, support of small business and individual business initiative. According to Medvedev, “the work will be done within the upcoming Council on strategic development and priority projects under President of the Russian Federation.”

According to Medvedev, the ruling United Russia party plans to change the country’s tax system in a move to stimulate economic growth.

“We’ll readjust the taxation system so that it not so much collects funds for the budget as stimulate the creation of promising, competitive goods and services beyond the resources sector, enhance the balance of regional and local budgets and facilitate formation of new revenue sources,” he said at the ruling United Russia party’s congress on Monday.

According to Medvedev, the party plans “not only to introduce local preferential tax treatment as was the case according to the law on areas of prior social and economic development.” “The United Russia is seeking to reduce the administrative burden on tax payers in general through improving the system of tax, duties and non-budget fund contributions’ administration,” Prime Minister said.

Also, the plan is to make “customs procedures most convenient for business,” he added.

The party is placing a “serious stake” on entrepreneurs, Medvedev said. “The party will focus on increasing the share of small and mid-sized businesses in the structure of the Russian economy within the nearest five years,” he said, adding that for doing this it will “join the implementation of the Strategy of development of small and mid-sized enterprises, proceed with efforts on simplification of registration procedures and reduction of the number of inspections, creation of additional fiscal incentives for SMEs and of course on expansion of the role of small and mid-sized businesses in the procurement system.” According to Medvedev, the annual volume of purchases of SMEs should be at least 1 trillion rubles ($15.3 bln) starting 2017.