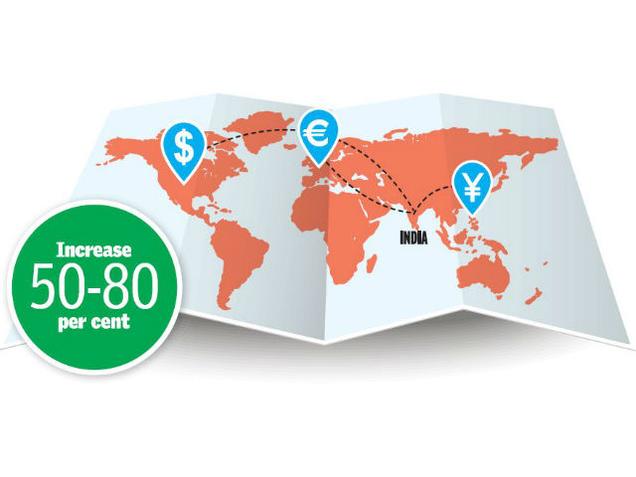 Remittances are estimated to grow on a par with South Asian Region.

The depreciation in the Indian rupee always has a positive impact on the remittances. The country has witnessed 50 to 80 per cent increase in remittance activity from various countries especially the Gulf regions, during the last three months.

Now the rupee is hovering around 63-64 a dollar as rupee closed at 64.24 on the International Day of Family Remittances, which is on June 16.

The remittance growth to India has consolidated and has maintained its global leadership with $70.4 billion inward remittances, says the World Bank Brief on Migration and Development, April, 2015. Remittances to India are estimated to grow on par with the South-Asian Region at 3.7 percent in 2015 as there are tremendous opportunities for large scale construction activities and fiscal expansion in Gulf Cooperation Council (GCC) countries, and improving economic prospects in the U.S.

“With high disposable income, high networth individuals (HNIs) look for an opportunity when the rupee falls so that they can cash in on the pricing difference and remit more money back home. This time, too, it is not any different,” said Ashwin Shetty, Senior Vice President – Treasury, UAE Exchange, a leading remittances firm.

“If the rupee continues its declining trend, we foresee an increase in the remittance activity especially among high-ticket remitters as the blue collar workers will continue to remit irrespective of the exchange rate fluctuations due to their social and economic needs,” Mr. Shetty added.

The advantage of a lower rupee is mainly taken by the high-ticket remitters who form around one per cent of the total population of remitters to India. According to Mr. Shetty, when the rupee depreciates, “nearly 50 per cent of the total volume of remittances come from the high ticket remitters and the majority of the funds are sent for investment purposes including real estate, fixed deposits and other instruments which have high return potential.”

India is one of the most cost-effective markets to receive remittances as the average remittance cost is approximately four per cent.

Globally, the cost of sending remittances is currently at the average of eight per cent. In the recent G20 Summit, the Open Working Group on Sustainable Development has proposed a target for reducing remittance costs to three per cent by 2030. Reducing the cost would translate into saving of over $20 billion annually for the migrants and their relatives.

With the recent initiatives by the Indian Government for promoting financial inclusion, over 12 crore Jan Dhan bank accounts have been opened in under banked rural areas. This provides a significant opportunity to migrate cash-to-cash remittances to account credit transactions. Many leading remittance service providers have now reduced the fee for account-to-account transfers in high-volume corridors such as India.

Flows are expected to accelerate in 2016, and reach $479 billion by 2017 in line with the more positive global economic outlook. Global remittance receipts, including both developing and high-income countries, were estimated at $583 billion in 2014, and rise to $586 billion in 2015 and $636 billion in 2017.