The central bank will allow the ruble to weaken to 80 per dollar before selling foreign currency, according to the median estimate of 26 analysts. It will tap reserves to rescue the currency if oil slips to $40 a barrel and stays there through year-end, 19 of 30 economists in the Aug. 24-26 survey said. 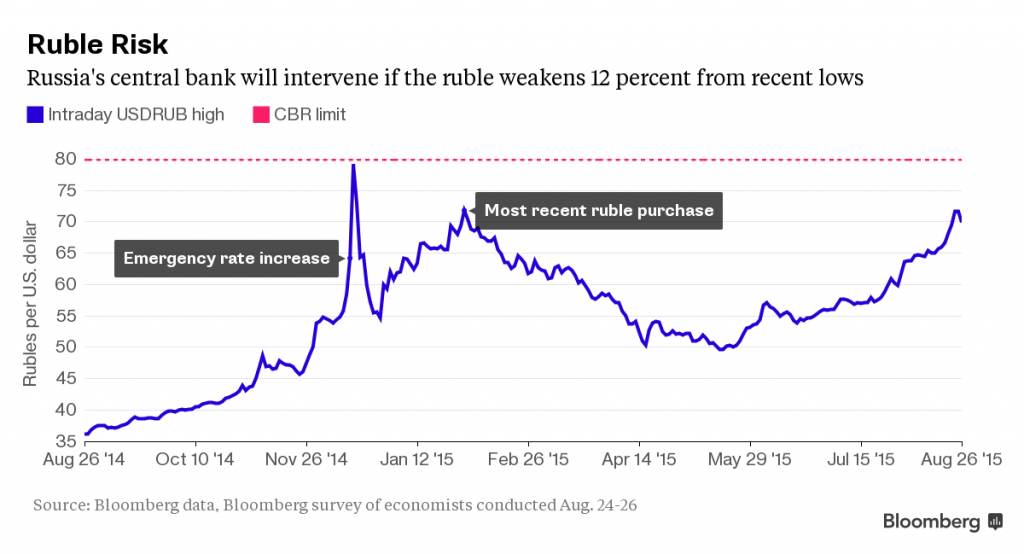 Faced with Russia’s first recession in six years and the worst currency rout since a 1998 default, the central bank floated the ruble in November, sparking a slide of about a third against the dollar. Its commitment to that decision is being tested as a new round of energy-price weakness feeds into the currency. While that boosts the ruble value of dollar-based oil revenue, it also stokes inflation, curbing purchasing power, a major economic driver.

“The central bank doesn’t mind the ruble weakening as the budget painfully needs it to adjust to the low oil price,” Vladimir Miklashevsky, a strategist at Danske Bank, said by e-mail. “It seems the Bank of Russia has become more cautious with use of interventions or policy tightening as those measures haven’t historically brought any relief.”

The ruble is the world’s worst-performing currency in the past 12 months, sinking 45 percent, data compiled by Bloomberg show. It’s only once breached 80 per dollar, an all-time low, in intraday trading on Dec. 16.

The central bank last intervened the day before that as it raised its benchmark interest rate by 6.5 percentage points, the most in 16 years, to quell the currency storm. At that stage, the ruble was trading at about 64 per dollar. It also bought rubles at the end of January when the rate was near 69. The ruble traded 3.1 percent stronger at 66.72 on Thursday.

Policy makers will probably only use reserves on a limited and targeted basis, according to Andreas Schwabe, an economist at Raiffeisen Bank International AG in Vienna.

“It would be futile to burn tens of billions of dollars in the face of a low oil price,” he said by e-mail. “But there have to be measures in place to avoid market panics like last December.”

Policy makers are already providing support. The central bank will renew a 12-month loan program halted in June, and may prolong anti-crisis measures due to expire in October, Governor Elvira Nabiullina told a government meeting with PresidentVladimir Putin Wednesday. 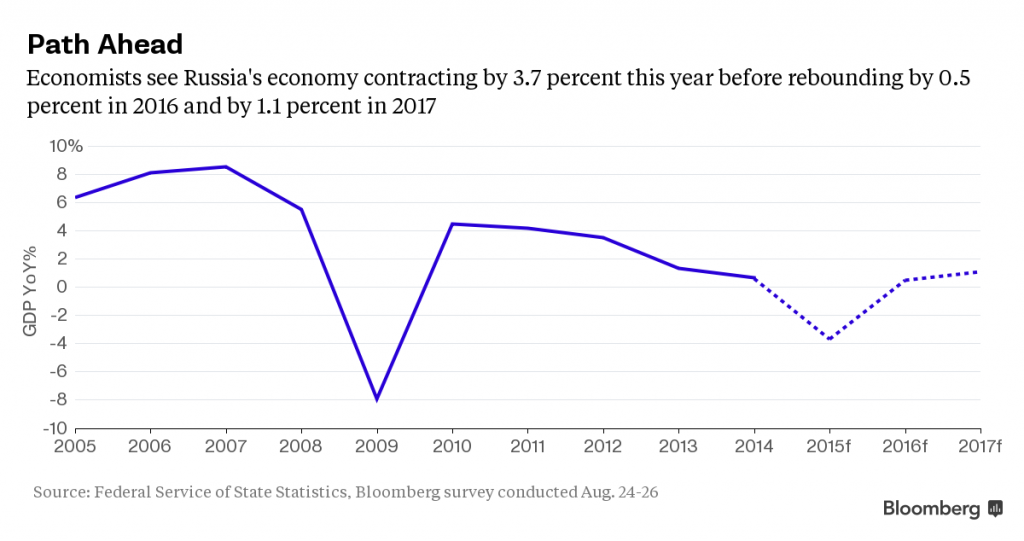 Economists in a separate survey forecast that Russia’s economy will shrink 3.7 percent this year, worse than the 3.5 percent contraction they projected last month, before rebounding by 0.5 percent in 2016. The ruble trading weaker than 70 rubles per dollar for a sustained period would add another percentage point to this year’s slump, they said.

Gross domestic product may contract“slightly” next year if oil prices average $40, Economy Minister Alexei Ulyukayev told reporters Thursday, though he said there isn’t a high probability of this scenario playing out. 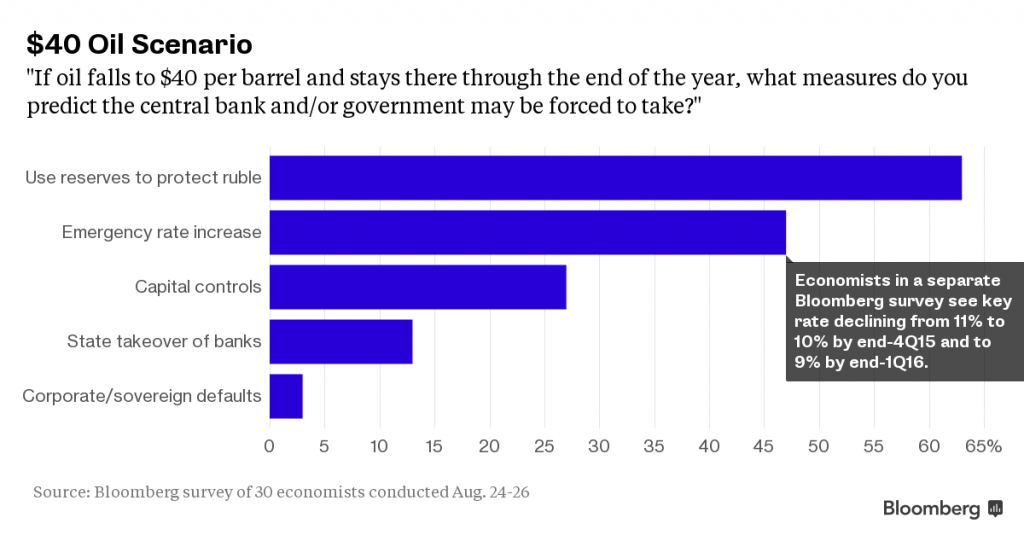 Crude prices are down by more than a third from this year’s closing peak, reached in June, amid speculation that slowing demand in China will amplify a global supply glut.

Oil at $30 will begin to erode Putin’s popularity, which has surged past 80 percent since he annexed the Black Sea peninsula of Crimea from Ukraine in March 2014, according to the survey. Russia’s financial system will collapse if oil prices decline to $22.50, the analysts said. 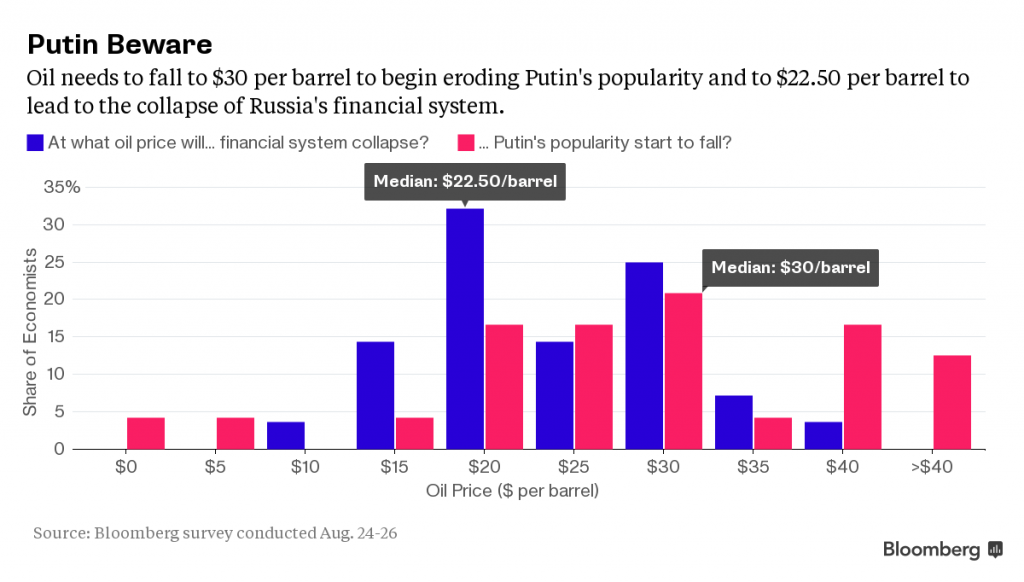 “The Russian population’s tolerance for economic misery is higher than in any other even semi-developed economy,” Wolf-Fabian Hungerland, a Hamburg-based economist at Berenberg Bank, said by e-mail. “If one thing is certain about the Russian economy, it’s that Putin’s popularity isn’t carried by economic progress. When the economy nosedives, Russians adjust rather than panicking or turning against the Kremlin.”