On a vast construction site in Barra da Tijuca, a far-flung suburb of Rio de Janeiro, giant lozenge-like structures are rising from the dust.

The three arenas, known as Carioca 1, 2 and 3, will stage events ranging from basketball to wrestling in nine months’ time during the 2016 Olympics. 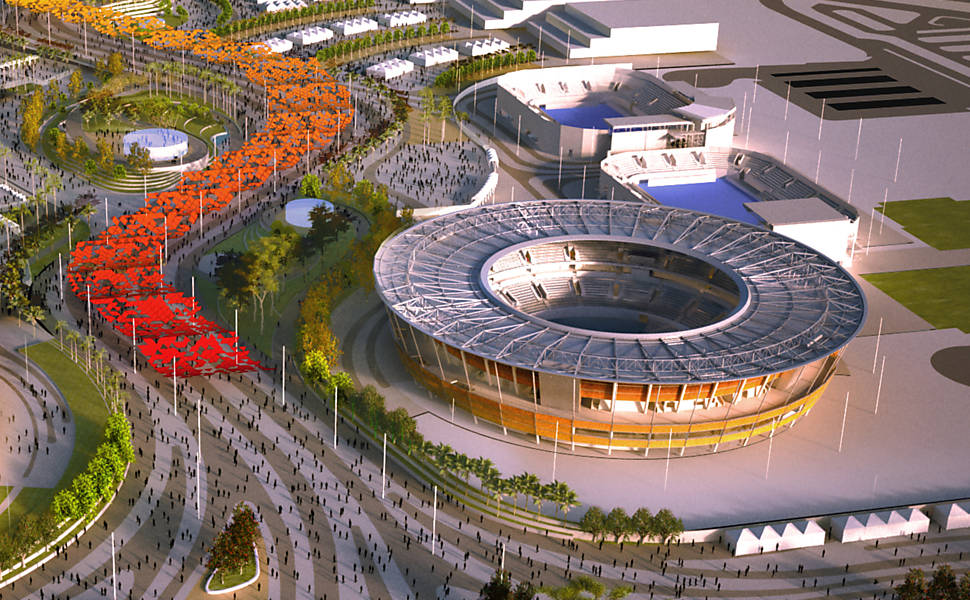 Unlike the nation’s frenzied last-minute preparations for the 2014 World Cup, the atmosphere at the Olympic Park, which also includes an aquatic stadium, tennis arena, velodrome and other facilities, is almost relaxed.

Not only are the projects running on time, says the man responsible for the city’s hosting of the games, Rio mayor Eduardo Paes, but they are within budget – unlike the World Cup, in which costly blowouts sparked mass protests in 2013 against the event.

The secret, he says, is heavy private sector funding for the Olympics and the use of a number of innovative techniques including temporary stadiums that can be dismantled and turned into other public facilities such as schools after the games.

“I see the Olympics as a political event,” says Mr Paes, an energetic 45-year-old whom some analysts see as a possible candidate for president of Brazil – if the games go well. “For me, the event is to show that here we can also do things on time and leave a legacy.”

With Brazil slipping into what is expected to be its worst recession since the 1930s, the political pressure has become even greater. As unemployment soars, voters are increasingly intolerant of any public expenditure perceived as frivolous.

Delivering the games was never going to be easy in a city such as Rio, whose natural beauty contrasts with its stark social inequality. About 22 per cent of its more than 6m residents live in favelas, or slums, many run by drugs gangs.

Critics such as Orlando Alves dos Santos Júnior, a professor at the Institute of Urban and Regional Research and Planning at the Federal University of Rio de Janeiro, say the Olympics have been constructed in a manner that promotes “urban segregation”. He says: “It’s about exclusion, not inclusion.”

The total bill associated with the games is R$38.2bn ($10bn), of which R$24.6bn is for “legacy” projects – independent public works inspired by the games, such as rapid bus-transit lanes, a metro line and a revamp of the derelict port district. Another R$7bn pays for the games’ organising committee and R$6.6bn is for Olympic venues.

The mayor says the private sector is funding two-thirds of the costs of the venues. The government, meanwhile, is providing public land for the athletes’ village, the Olympic Park and other facilities.

These are being built by private sector companies, which in exchange will later sell them as real estate ventures. Mr Paes argues that the city government is spending less on venues than London in 2012 and Tokyo in 2020 and that the venues being built have pre-planned uses when the games are over.

One of the Carioca arenas, for example, will have part of the inside seating area converted into classrooms for elite young athletes. Another venue, the Arena of the Future, which will host handball, is made of prefabricated parts to be turned into four schools in a practice dubbed “nomadic architecture”.

“Why are the games not unpopular?” asks the mayor, citing polls that show public support for the event. “Because there is no scandal . . . everything is being done in a modest way.”

Critics, such as Prof Santos, argue that the true costs to the government, such as from the transfer of prime real estate to the developers, are not transparent.

He contends there were mass removals of the poor out of Barra, considered a rich area, to make way for the games.

“There are communities in Barra da Tijuca that don’t exist any more . . . They have been swept from the map,” he says.

However, according to Mr Paes, the only community being removed for the games, called Vila Autódromo on the Olympic Park site, is being offered new apartments 800 metres away.

“This is a question of ideology on the part of political actors in Brazil, who think that private-public partnerships are bad. There are people who would prefer that we spend public money on apartments where athletes will stay for 15 days.”

Another commonly expressed concern is security. Rio’s efforts to install community police posts in the favelas is running into trouble amid a resurgence in gunfights with drug traffickers.

But Mr Paes says: “The problem is not during the event – there will be police, soldiers, the armed forces et cetera. The problem is before and after. Rio’s challenge is to make security permanent.”