2015/12/17 By YANG YANG in HomePage Featured, Investment Opportunities Tags: China, One Belt and One Road 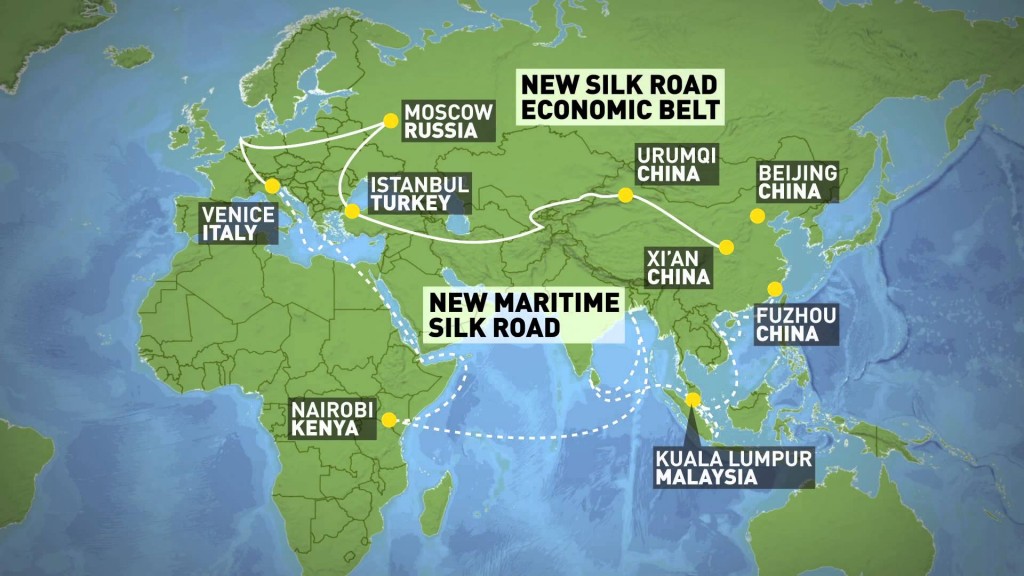 Chinese President Xi Jinping officially unveiled the One Belt One Road (OBOR) initiative at the Asia Pacific Economic Cooperation (APEC) meet in 2014 along with the establishment of the $40bn Silk Road fund to implement the OBOR. One Belt will be a land-based economic corridor slated to run from Xian in Shaanxi province, China, navigating through Central Asia and Europe before terminating at Venice in Italy.

The road, on the other hand, refers to the 21st century Maritime Silk Road – a sea-based route originating from Quanzhou in Fijian province China, passing through the Strait of Malacca in order to reach Nairobi (Kenya), before merging with the land-based route in Venice.

The belt involves significant investments to develop road and rail infrastructure through this corridor along with other ancillary facilities like high-speed optic fibre cables for better communication and energy pipelines. As for the route maritime, it will deal with development of ports in the participant countries along with initiatives to simplify procedures for trade. The OBOR covers about 40-60 countries consisting of about 65 per cent of the world’s population, generating 30 per cent of the world’s GDP.

It is believed that the OBOR is likely to be completed in time for the 100th anniversary of the establishment of the People’s Republic in China, in 2049.

Overall, it’s a masterstroke by China which will maintain its dominance in the new multi-polar world, both economically and strategically. The grand plan, if implemented successfully, will also reboot the Chinese economy which has been progressively slowing down.

Apart from huge infrastructure investment in development of road and rail infrastructure, high-speed optic fibre cables and energy pipelines, development of ports and establishment of trade logistics and institutions in the participant countries, the OBOR initiative seeks to achieve policy coordination among participant nations through intergovernmental cooperation, macro-policy correspondence and special communication mechanisms.

Large investment will be made across infrastructure sectors which, in turn, would raise the demand for products such as steel and cement.

Some of the sectors related to construction, petrochemicals, high-speed railways and wagons, telecommunication, etc, will see increased demand as well.

As most of the OBOR infrastructure projects would be funded by China and institutions supported by China, such demand orders will go to Chinese companies that have thus far been saddled with unutilised capacity due to lack of demand.

The Chinese economy has slowed down over the last couple of years leading to excess capacity in Chinese factories. By promoting investments in course of implementation of OBOR projects, it is expected that new opportunities and markets would be created for Chinese firms which would have a multiplier impact on production of goods and services domestically, thereby creating more jobs and higher incomes for the Chinese populace.

In fact, what China needs now is giving a boost to aggregate demand to sustain even seven per cent growth rate. The OBOR initiative will reboot China’s factories not only in using installed capacity but also expanding in future, thereby contributing to exports, jobs and forex. It is well-known that China aspires to be a major world power rather than a regional one.

As has been noticed with other global multilateral institutions such as the Asian Development Bank (ADB), International Monetary Fund (IMF), World Bank, etc, the principal funding country gets a significant political voice in the recipient or participant countries’ domestic and international policies. The OBOR initiative can become a tool to further China’s political and economic interests both in Asia and in the rest of the world.

Given huge foreign exchange reserves, totalling about $4tn, China is in need of avenues to invest so as to earn a reasonable return on the same. Also with most of the projects (in initial phases at least) to be financed by Chinese financial institutions like China Investment Corporation, China Development Bank, etc, and China-dominated institutions like Asia Infrastructure Investment Bank and BRICS New Development Bank, China is attempting faster internationalisation of its currency and a greater role for itself on the international platform.

China has longstanding disputes with many of its neighbours like India and Vietnam. By increasing economic influence through OBOR initiatives, China may influence economic and foreign policy of participant countries to settle such disputes in its favour.

Neighbouring countries, especially like Mongolia and Kazakhstan, are strongly supporting OBOR. Central Asia and the Middle East are, or would be, in the process of rebuilding their economies post-civil wars.

Financing at such a critical juncture is likely to give China a big say in the direction of not only their economic but also foreign policies. In fact countries like Pakistan, Sri Lanka, Myanmar and the Maldives not only support OBOR, but are already offering several concessions to Chinese companies. Therefore, countries like India, Vietnam, etc, along with the Western powers like US and Australia, view OBOR with suspicion.

China seeks to expand its influence not only in Asia, but across Africa and Europe, with OBOR as the weapon. It also expects to improve its relations with the EU. The latter’s economy is going through a bad phase with low consumer demand and high unemployment.

The OBOR project gives China an opportunity to build and upgrade its infrastructure, and build mutual trust with the EU, besides getting market access in Eurozone, something that China has found rather hard to get.

So, OBOR will lead to greater cooperation between the EU and China, in both economic and strategic matters. China is keen to offer more economic and financial assistance to regional countries and beyond through connectivity programmes, technical exchanges and the building of infrastructure. Overall, it’s a masterstroke by China.