Prime Minister Narendra Modi’s rating remains high at 74%, according to a poll conducted by Min t and InstaVaani in November. The poll was conducted in the last week of the month, after the declaration of the results of the Bihar assembly election, in which Modi’s Bharatiya Janata Party-led alliance lost but before his speech in Parliament on Friday when he reached out to the opposition.

The results prove that people continue to have high expectations of Modi, said Sandeep Shastri, pro-vice-chancellor, Jain University, and director of its Centre for Research in Social Sciences and Education. “The high rating can also be attributed to the absence of a strong alternative to Modi” in the public’s eye, he added.

In May, when his government and he completed a year in office, his approval rating was 74% again.

“There is some level of disillusionment” but expectations “are still high”, said Shastri. 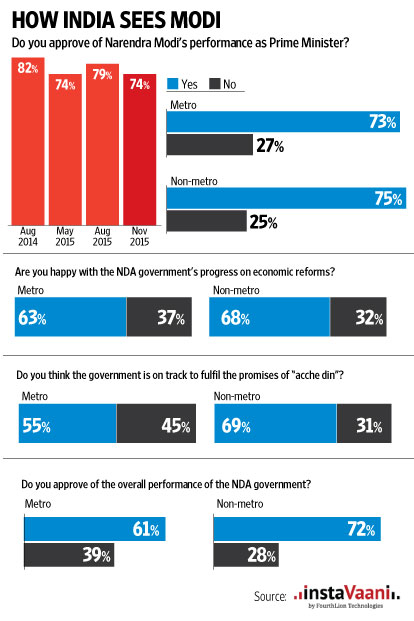 “The popularity of Prime Minister Modi continues to remain high because the people of the country understand and relate to his ideas, and they believe in the promises made by the prime minister,” said Sidharth Nath Singh, the national secretary and spokesperson of the BJP.

A Congress leader dismissed the Mint-Instavaani survey and termed it “faulty”.

“It is well-known that the popularity of Prime Minister Modi is low, otherwise he would not have called the Congress leaders for talks on crucial bills,” said this person, who spoke on condition of anonymity.

“People in the metros have higher expectations of the prime minister and are also more cynical,” said Shastri. Those outside the metros are more “indulgent” and “tend to give more time (for promises to be fulfilled)”, he added. Overall, Mint’s research partner InstaVaani polled 1,106 respondents across the metros and the non-metros. The Mint-InstaVaani approval rating of Prime Minister Modi is the only one carried out at regular intervals.

Balveer Arora, a political science professor at the Centre for Political Studies at the Jawaharlal Nehru University (JNU), Delhi, explained Modi’s consistently high ratings as a function of the prime minister’s excellent “perception management” rather than an “approval of his policies” or behaviour of “fringe elements”.

“His persona is projected in multiple ways—he is travelling (around the world), speaking to different audiences… His visibility is high on social media.”

The government has weathered several mini crises during its 18 months in power.

In August, the Mint-InstaVaani poll was carried out even as three BJP leaders were under fire for alleged impropriety and corruption and the government was facing criticism from business leaders for its slow pace of reforms.

The latest edition was carried out after the BJP-led alliance’s humbling defeat in Bihar and amidst criticism that the government was, overtly and covertly, responsible for rising intolerance in the country.

The government has agreed to a debate on intolerance in Parliament in a bid to address these concerns and push through its legislative agenda—including a much-awaited bill on Goods and Services Tax (GST), which will unify the Indian market and boost the economy by over a percentage point according to some economists.

The results of the survey show “that Bihar polls are not being viewed as a referendum on Modi or the central government,” said Shastri.