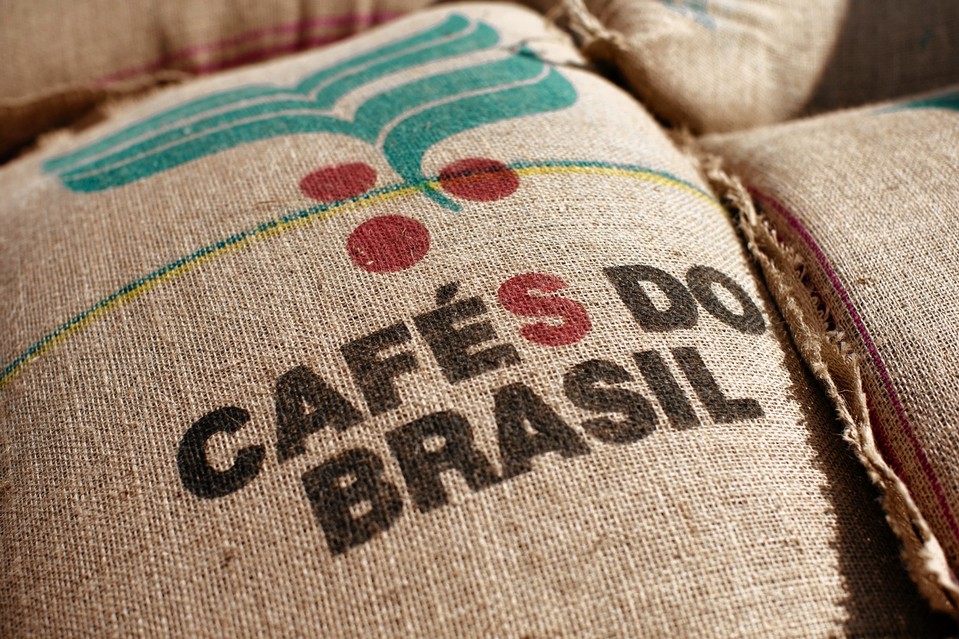 Hedge funds are betting your morning cup of coffee is going to get cheaper, even as prices head for a sixth straight monthly loss. 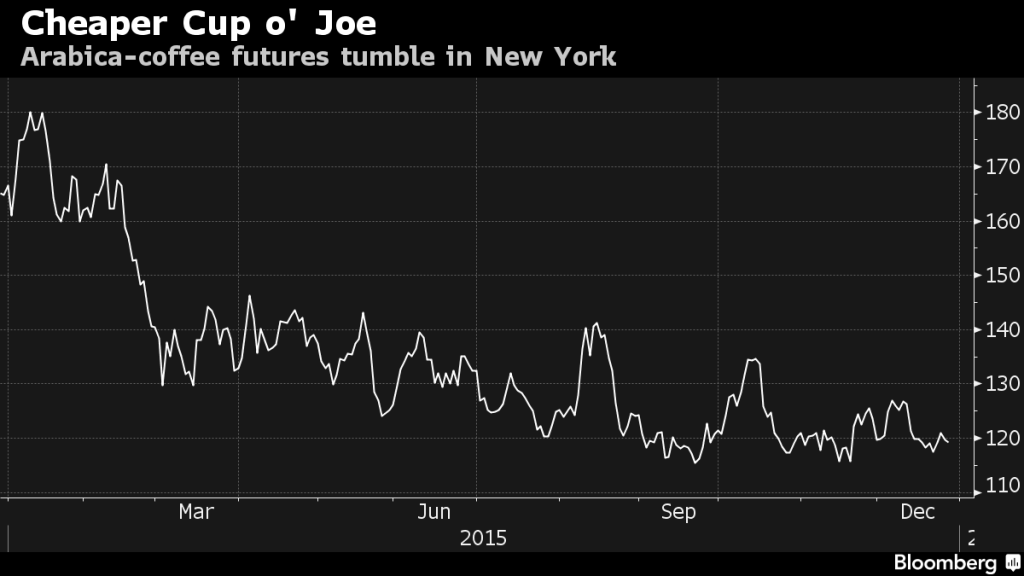 As favorable weather increases crop yields, declining currencies in producing countries are encouraging farmers to export supplies that fetch dollars in return. It’s all adding up to overwhelming supplies, and the U.S. Department of Agriculture is predicting that output will top use for a sixth straight year. Brazil’s harvest is poised to keep getting bigger next season, according to Rabobank International.

“Supplies will continue to come at a healthy clip,” said Sameer Samana, a St. Louis-based global quantitative strategist at Wells Fargo Investment Institute, which oversees $1.7 trillion. “There’s nothing to suggest starting a new leg up for coffee. Brazilian producers will do anything they can to sell future crops” as the domestic currency retreats, he said.

Arabica prices dropped 28 percent this year to $1.1915 a pound on ICE Futures U.S. in New York. The net-short position in futures and options increased to 16,734 contracts in the week ended Dec. 22, according to U.S. Commodity Futures Trading Commission data released Monday. The figures, which were delayed after the Christmas holiday, compared with 11,409 the prior week.

Coffee lovers are already benefiting from this year’s slump. The average U.S. retail price fell 4.3 percent to $4.412 a pound in November, the lowest since February 2011, government data show. In July, Smucker cut retail prices, followed by reductions for some roast and ground products by Kraft Heinz Co., the maker of Maxwell House. Starbucks expects bean costs to stay “favorable” into 2016, Scott Maw, the chief financial officer, said on a Oct. 29 conference call.

Coffee isn’t the only crop with big supplies. Food prices have fallen 18 percent in the past year as farmers harvested bumper grain crops worldwide and demand slowed for some meat and dairy products, data from the United Nations Food & Agriculture Organization show. The Bloomberg Agriculture Subindex is heading for a third straight annual decline, the worst slump since 2001.

In Brazil, where drought ravaged crops in 2014, plentiful rains helped to rescue coffee trees this year. The country’s next harvest may rise to 58 million bags from 48.4 million a year earlier, estimates Rabobank International. Ecom Agroindustrial Corp. sees the crop as high as 60 million bags, each weighing 60 kilograms or 132 pounds. 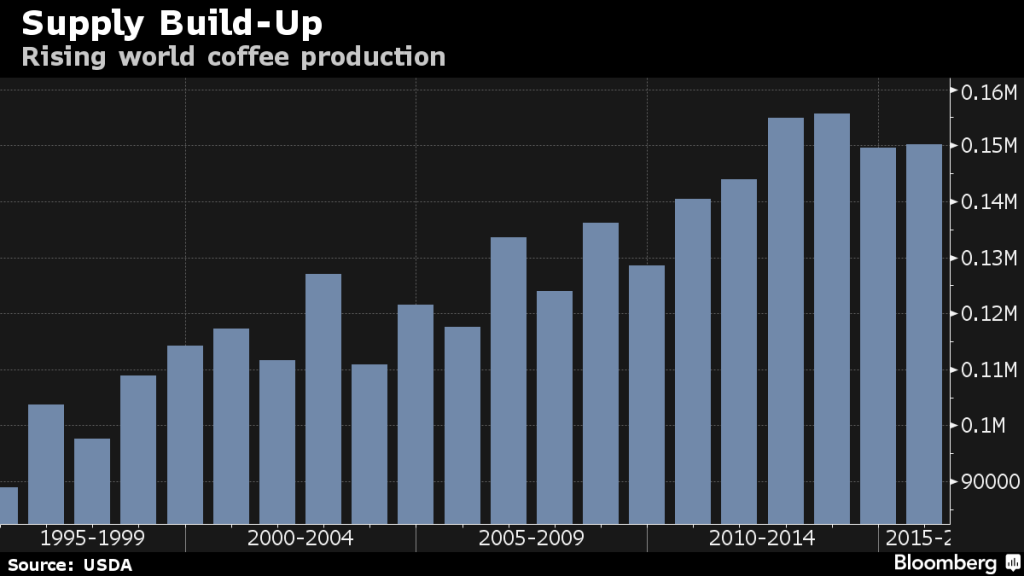 Supplies are also climbing elsewhere. Colombia’s production could reach 14 million bags in 2015 from 12.1 million a year earlier, and may rise to 16 million by 2018, the country’s growers’ federation has said. Honduras, the largest grower in Central America, is set to collect a record harvest.

There are still threats for crops that could help the stem the rout for futures, said Lara Magnusen, a La Jolla, California-based portfolio manager at Altegris Investments Inc., which oversees $2.59 billion. Prices more than doubled in early 2014 after a lack of rain in Brazil during the first quarter hurt plantings. The El Ninoweather pattern is expected to linger into early 2016. That may bring dry weather to Colombia, reducing bean quality.

Even with the supply risks, “the trend is obviously profoundly down” for prices, said Christopher Foster, a portfolio manager at Blackheath Management Inc. in Toronto, which oversees $25 million. “The trend and the fundamentals make it pretty attractive to short coffee. The current rain in Brazil will ultimately improve the crop for next year.”