Some quick thoughts on Indian Prime Minister Narendra Modi’s trip to China thus far, following the release of the Joint Statement, and Modi’s remarks at the Great Hall of the People, at Tsinghua University, and at a bilateral forum of state and provincial leaders:

1. Candid Modi. In his statement to the media, Modi noted that the bilateral discussions had been “candid, constructive and friendly.” He was definitely more candid in his remarks about Indian concerns than is normal for Indian leaders during China-India summits. While senior Indian policymakers often downplay the bilateral differences during visits (incoming and outgoing) and focus more on cooperative elements, in two speeches and in the joint statement released, Modi mentioned them repeatedly. He talked about the relationship being “complex,” as well as about issues that “trouble smooth development of our relations” and held back the relationship. He urged China to think strategically (and long-term) and “reconsider its approach” on various issues. First and foremost: its approach toward the border, but also visas and trans-border rivers, as well as the region (read China’s relations with Pakistan among others). China’s approach on economic questions was also put on the table, with Modi stating that, in the long-term, the partnership was not sustainable if Indian industry didn’t get better access to the Chinese market. The joint statement acknowledged that the level of the trade imbalance (in China’s favor) was not sustainable either. Modi also made clear that India wants China’s support for a greater role in international institutions. He specifically highlighted that China’s support for a permanent seat for India at the U.N. Security Council (UNSC) and Indian membership of export control regimes would be helpful to the relationship (interestingly, he explained India’s desire for UNSC permanent membership as stemming from the same logic as the establishment of the Asian Infrastructure Investment Bank—part of Asia “seeking a bigger voice in global affairs.” In the joint statement, however, China continued just to recognize India’s aspirations for a greater UNSC role. It did though include mention of India’s Nuclear Suppliers Group aspiration.

There was also an overall message from Modi that these issues couldn’t be set aside and that progress was necessary: “…if we have to realise the extraordinary potential of our partnership, we must also address the issues that lead to hesitation and doubts, even distrust, in our relationship.”

2. The Border. Modi put the border at the top of the list of such issues, stating “we must try to settle the boundary question quickly.” Seeming to add a parameter to any potential solution, he stated that the two countries should settle this question “in a manner that transforms our relationship and [will] not cause new disruptions.” In the meantime, he noted that the mechanisms managing the border were working fine, but asserted that it was important to clarify the Line of Actual Control since otherwise there was a persisting “shadow of uncertainty.” He noted that he’d proposed a resumption of “the process of clarifying it.” The joint statement stated a desire for enhanced exchanges between the militaries to better communication on the border and an exploration of whether/how to increase trade at the border.

As is wont for Indian leaders in China, Modi didn’t explicitly assert India’s claim to the state of Arunachal Pradesh, but for those of us who read between the lines, he mentioned the number of states India had, referring to “30 pillars comprising the Central Government and all our States”—those 29 states include Arunachal Pradesh.

3. Economics. Modi’s day in Shanghai on May 16 will feature the economic relationship more. He did note the “high level of ambition” the two sides had for the relationship and his hope to see increased Chinese investment in infrastructure and manufacturing in India. China and India agreed that bilateral trade was “skewed” and likely unsustainable if that didn’t change.

At his speech at Tsinghua he linked both Mumbai’s rise to trade with China and the evolution of silk tanchoi sarees to skills learnt by Indians from Chinese weavers—thus both pointing out that the trade relationship is an interrupted one and (to his domestic critics) that India stands to gain from this engagement.

4. Building Trust & (People-to-People) Ties. There was a major emphasis in Modi’s remarks on building trust, and improving communication and connectivity, with a special emphasis on enhancing people-to-people ties. On the latter, he stated frankly, “Indians and Chinese don’t know each other well, much less understand each other.” Various polls and surveys also show that, what they do know, they often don’t like.

This lack of trust, knowledge, and even interest could limit policymakers’ options (including in settling the border question) down the line. Thus, Modi asserted that China and India “must build more bridges of familiarity and comfort between our people.” To increase travel to India (and bring in tourism revenue), he announced that India’s e-visa facility will be made available to Chinese nationals. The two countries also agreed to establish consulates in Chennai and Chengdu. For greater learning about each other, there were decisions to set up an annual bilateral Think Tank Forum, to institutionalize the High-Level Medium Forum, and establish a Centre for Gandhian and Indian Studies at Fudan University.

Modi also noted that, at the end of the day, improving opportunities for interaction wasn’t sufficient. China would also have to do its bit to shape perceptions of itself in India—since even “small steps can have a deep impact on how our people see each other.”

There was also an emphasis on moving beyond Delhi, including through the establishment of the State and Provincial Leaders’ Forum, with a desire to increase and facilitate engagement at the state and city levels.

On the central level, there were decisions announced to enhance or institutionalize engagement at the leaders level, as well as between the foreign policy and planning bureaucracies, as well as the defense establishments. Modi also especially highlighted “Our decision to enhance strategic communication and coordination on our region…”

5. Regional and Global Issues. While there was mention of continuing cooperation towards the Asian Infrastructure Investment Bank, if Beijing was looking for an endorsement of its One Belt, One Road initiatives, it wasn’t forthcoming. Modi noted that both China and India were “trying to strengthen regional connectivity and seeking ‘to connect a fragmented Asia.’” But he distinguished between two types of projects: “There are projects we will pursue individually. There are few such as the Bangladesh-China-India-Myanmar Corridor that we are doing jointly.”

There was special mention of shared interests in West Asia and Afghanistan, as well as counterterrorism and climate change—the latter even got a separate joint statement. The main joint statement had an interesting reference to the two countries broadening cooperation in the South Asian Association for Regional Cooperation—China is not a member, but many believe that it would like to be (India’s traditionally been hesitant for China to go beyond its observer role).

Modi also highlighted a “resurgent Asia” that offers “great promise, but also many uncertainties” and “an unpredictable and complex environment of shifting equations.”

Modi acknowledged China and India’s “shared neighbourhood,” where they were both increasing engagement. He also seemed to admit that this could cause concern and thus “deeper strategic communication to build mutual trust and confidence” was essential. Perhaps pointing to China’s relations with Pakistan and others in India’s neighborhood, Modi stressed, “We must ensure that our relationships with other countries do not become a source of concern for each other.” However, this also acknowledged Chinese anxieties about India’s evolving relationships.

For those in China concerned about India’s relations with the United States and if it was designed to contain China, Modi had a message: “If the last century was the age of alliances, this is an era of inter-dependence. So, talks of alliances against one another have no foundation. In any case, we are both ancient civilizations, large and independent nations. Neither of us can be contained or become part of anyone’s plans.”

6. The Image of a Confident India. Modi’s remarks seemed intended to exude confidence about India and its role in the world. He stated that in an age of many transformations, “the most significant change of this era is the re-emergence of China and India.” Laying out why India, in his perspective, is the next big thing, he seemed to suggest that it was in China’s interest to get on board the India train. He noted the political mandate he had, the steps his government had taken, and that “no other economy in the world offers such opportunities for the future as India’s.” The Indian prime minister asserted, “We are at a moment when we have the opportunity to make our choices.” He seemed to want to make clear that enhancing engagement with India would be the right one for China.

Winner: Social media—it’s been ubiquitous, from Modi joining China’s Weibo to the Modi selfie with Chinese Premier Li Keqiang to the continuation of the Modi-looking-at-things meme.

Loser: Panchsheel. It’d been a bit odd that India had continued to choose to mention Panchsheel and the Five Principles of Peaceful Coexistence—principles that are remembered by many in India as being honored by China in the breach than in the observance in the late 1950s and early 1960s. There was even a shout-out to it in the Modi-Xi joint statement in September 2014. But it’s missing in action in the 2015 joint statement and seems to have been replaced by this:

The leaders agreed that the process of the two countries pursuing their respective national developmental goals and security interests must unfold in a mutually supportive manner with both sides showing mutual respect and sensitivity to each other’s concerns, interests and aspirations. This constructive model of relationship between the two largest developing countries, the biggest emerging economies and two major poles in the global architecture provides a new basis for pursuing state-to-state relations to strengthen the international system.

(The author Tanvi Madan is a fellow in the Foreign Policy program at the Brookings Institution, and director of The India Project. Madan’s work explores Indian foreign policy, focusing in particular on India’s relations with China and the United States. She also researches the intersection between Indian energy policies and its foreign and security policies.) 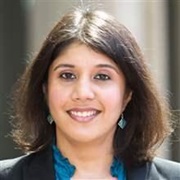