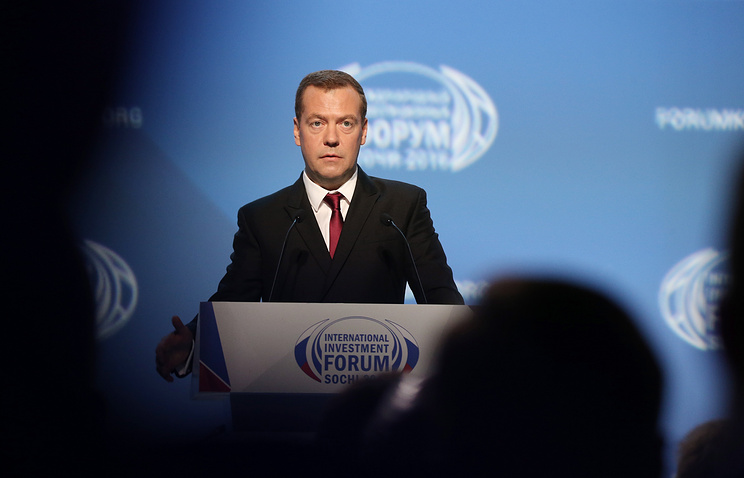 The Russian authorities should be able to convert political stability in the country into efficient economic development with the focus on improving living standards in the coming years – even amid the sanctions, Russian Prime Minister Dmitry Medvedev said on Friday.

The Russian premier made this statement at a plenary session of the International Investment Forum in Sochi.

Medvedev called the anti-Russian sanctions as the vivid example of politicizing the world economy.

“But even in these conditions, the ability to convert political stability inside the country into the effective development of the national economy is the authorities’ direct duty,” Medvedev said.

“And by assuming the powers [following the results of the elections to the State Duma where the United Russia party led by Prime Minister Medvedev gained a constitutional majority], we have assumed the obligations to do everything in the current political cycle for achieving economic growth and, importantly, for improving the life of people. And the economic agenda of the next five years will be focused precisely on this,” the Russian premier stated.

Medvedev considers it necessary to completely change the state government system in the country.

“For us it is absolutely important not only to achieve all the benchmarks in education, healthcare, road building, improving urban environment – that is, in all the areas of people’s lives, although it is a key task, but we also need to bring a complete change to the state management system,” the prime minister said.

“The low efficiency of state management system is one of the key factors that have been hindering the country’s development,” the cabinet head said, adding that many promising initiatives and ideas that could have helped in moving Russia forward, simply fell apart after running into administrative barriers while the adopted laws were not effective enough.

“That is why now we are trying to move from an “instructions-based” mode of management to one based on results, that is a project-based approach,” Medvedev stressed noting that it should serve as a capability test to ensure a better quality of state management.

The prime minister also said that the project approach was based on efficiency, as each ruble from the budget invested in specific projects was supposed to improve the quality of the services, goods and infrastructure while each regulatory act should bring concrete results. “The strategy for creating a brand new atmosphere nationwide will be backed by the authorities on all levels. It is not only money that matters. We must ensure the clear implementation of all the decisions in every Russian region,” Medvedev stressed.

“In a country as big as ours, where one region differs much from another and the administrative system is multi-layered, the state management system needs to be far more efficient,” the prime minister concluded. “In this regard, there is always room for improvement in professional responsibility.”.

Medvedev, who chairs the United Russia party, believes the results of the September 18 elections to the 7th State Duma are a carte blanche for the authorities to go ahead with the challenging efforts on the country’s development.

“The result that we received is not only an indicator of political stability, although this is very important. This is not only the victory of the United Russia but also great possibilities. But in the first place this is huge responsibility before the people who trusted us and supported us,” Medvedev said.

“In fact, as they say this is a carte blanche from millions of citizens of Russia to continue the great and difficult work on the country’s development,” Medvedev said, adding that he expects the government officials, the heads of regions and MPs to share this opinion.

The State Duma elections were held on September 18 on a mixed basis: 225 members of the lower house were elected by party lists, while the other 225 members were elected in single-seat constituencies. The ruling United Russia party garnered 343 seats, which means it will have the constitutional majority (that constitutes at least 300 seats). The Communist party got 42 seats, the Liberal Democratic party obtained 39 seats and A Just Russia party got 23 seats.

The Rodina (or “Motherland”) party and the Grazhdanskaya Platforma (or “Civil Platform”) party that failed to overcome five-percent vote threshold will get one seat each: Alexei Zhuravlyov and Rifat Shaykhutdinov who won the elections in one-seat constituencies, are going to represent these respective parties in the lower house. In addition, self-nominated candidate Vladislav Reznik also made it into the State Duma, he has already joined the United Russia faction.