Made in Russia: Not Just Oil and Gas

Rhetoric about it being “Nigeria with snow,” “Zaire with permafrost,” “Upper Volta with missiles,” “gas station masquerading as a country,” etc., regardless, the fact of the matter is that Russia does have a respectable manufacturing base.

This should be pretty obvious just from a quick perusal of the sorts of manufactures Russia produces:

A vast military-industrial complex that produces (and exports) on a scale and versatility exceeded only in the US.

Rosatom is building an amazing 40% of all the nuclear power plants currently under construction in the world. 10% of the world’s power turbines are made at the Leningrad Metallurgical Factory.

More prosaic but also more generally indicative, Russia produces about 2 million cars annually, which is about the same as in the UK and France, and thrice more than in Italy. This satisfies around 70% of its total domestic sales – virtually the exact same percentage as in the US and UK.

This is not, of course, to make Russia out to be some kind of manufacturing behemoth like Germany, Japan, or Korea. It is however on approximately the same level as the European economic Middle Powers of France, Italy, and the UK, as well as that of fellow BRIC members Brazil (which has a 35% larger population) and India (which has eight times its population). In other words, it is broadly what you would expect based on its GDP and status as an upper middle income country.

This is pretty elementary stuff any other journalist or pundit can discover for himself through a quick glance through the various economics statistical databases on the Internet. The figures below were derived from the World Bank’s data on nominal GDP and the share of manufacturing in the economy for 2013. 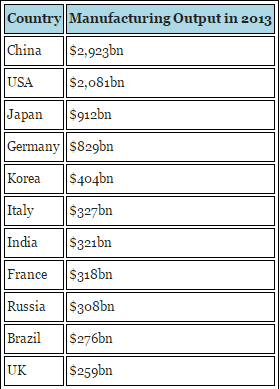 And here is a historical graph showing Russia’s manufacturing sector on a global perspective (log scale) since the early 2000s. 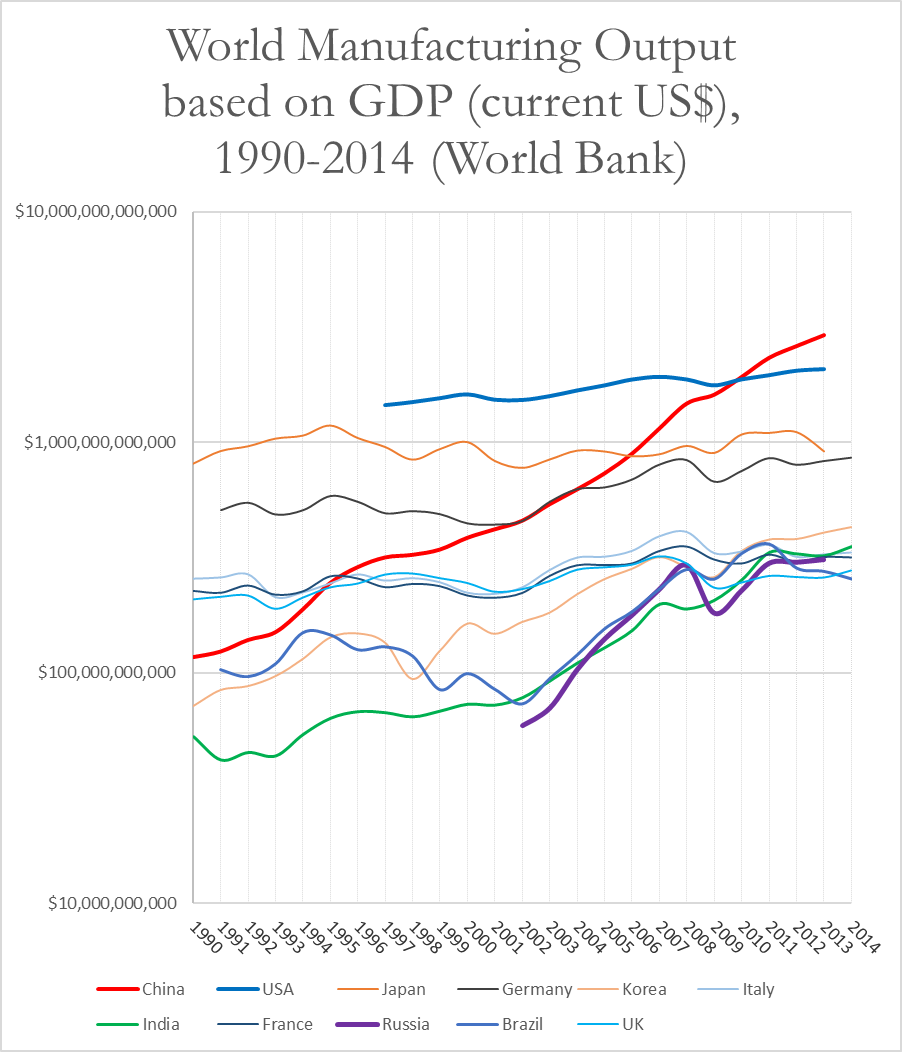 To be sure, yes, Russia exports very little of this. As mentioned, its manufacturing base is to a very large extent domestically orientated. Instead, its exports are dominated by oil, natural gas, and metals, of which it has a cornucopia.

Why? Because comparative advantage, otherwise known as Economics 101. A concept that in Russia’s case the Western media consistently has trouble with.

Cue the famous graph of Russia’s exports structure that supposedly makes it a gas station: 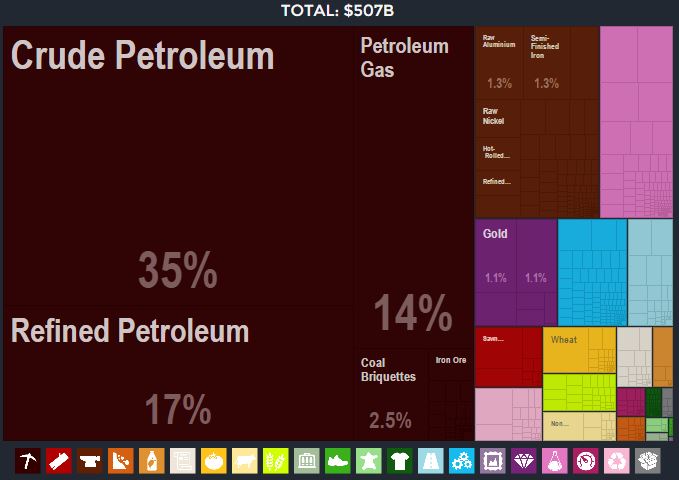 … which if so would then make Australia, a well educated nation and one of the richest in the world, nothing but a coaling station. 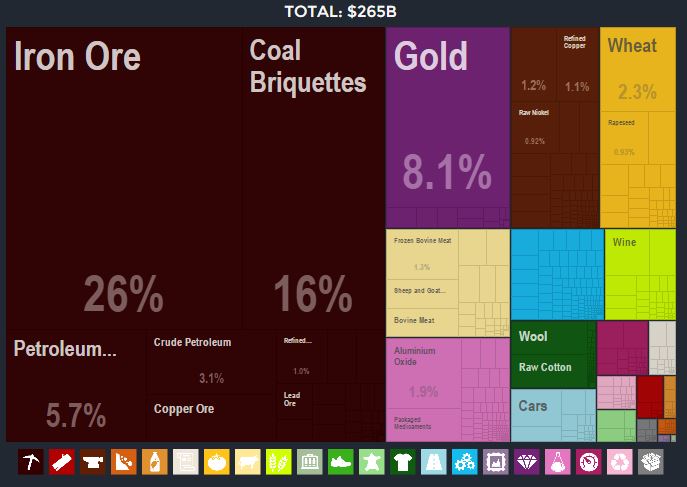 Incidentally, what makes the “Nigeria with snow” rhetoric so convenient is that it can be – and is – wielded against Russia regardless of what actually happens to the oil price. If it goes up, emphasis can be put on the increasing dependence of the Russian budget, exports, and overall economy on hydrocarbons. If it goes down, you can instead focus on the imminent fiscal collapse – no matter that Russia has almost $400 billion socked away and that its current budget deficit is close to non-existent. Regardless of what happens with the oil price, doom is always preordained. And there is nothing that Russia can do about this “oil dependence” in anything but the very longterm short of nuking all its oilfields.

I would write more but Ben Aris writing in February 2014 in response to a typical hackneyed Economic editorial on how Russia is hopelessly addicted to oil and about to collapse any moment now has made any such effort redundant, so I will instead save myself some work and quote him in extenso:

“this achievement was founded almost entirely on oil and gas prices, which have climbed fivefold since 1999.”

So now we launch into the core of the attach, the increasingly hackneyed argument that “all Russia’s prosperity is due to its gift of oil and the government has done nothing else to make life better.”

This argument is becoming extremely tiring and moreover as time passes it is demonstrably not true. Oil remains very important but a lot has changed in Russia in the last decade, which is being willfully ignored.

So if Putin is so rubbish and all the good stuff depends on oil, how did he manage to get all that growth in the years when he had the same oil prices as Yeltsin had??? Could it be that something else happened? Could it be that the devaluation of the ruble had a positive effect? Could it be that oil companies invested more in themselves in 2000 than in all the 1990s. Could it be this started off a virtuous circle of growth, investment and rising wages that lead to other companies appearing to take advantage of this new money? And if not, where did all those consumers come from that have been driving Russian growth in last five crisis years? Just askin’… because according to the Economist analysis it appears that oil pours directly into Russians pockets which they then go out and spend in the shops.

“Dependence on energy exports is greater even than under the Soviet Union: they now account for 75% of the total, against 67% in 1980.”

Journalism 101: “when citing statistics, you need to attribute them to the valid source so they can be checked.”

This number is flat out wrong, or made up, or I don’t know as the author doesn’t say where it comes from. The last number I have is from the Russian customs service and is 49.4% export revenues for oil and 11.7% for gas in 2013 – a total of 61.1% of export revenues which is LESS than the “Soviet number” (where ever that is from).

No one is denying that oil and gas play do provide funds to pay for lots of other things the government wants to do – and so impede reforms because the government is so actively throwing money at problems. But the statistic that everyone who makes this argument always skips over is that oil and gas only account for about 15% of GDP in terms of value created according to Rosstat; the service sector made up just over 50% of GDP in value terms last year. Russia is not just a black and white petroeconomy.

Oil is of course even more important than that as it has direct knock on effects to other industries. A paper from the highly respected Bank of Finland economic analysis team (BOFIT) tried to assess exactly how important oil and gas are to the Russian economy. It adjusted the number up to about 25% of GDP and made this conclusion: “When adjusted to reflect the oil and gas sector’s actual contribution to GDP, Russia is on par with Norway (Table 2). This is much less than traditional oil states such as Saudi Arabia, which generates about half of its GDP directly from the oil and gas sector.”

Lets just pause for a moment and take that in: Russia’s dependence on oil and gas is the same as that of NORWAY…. not a true petro-economy like Saudi Arabia.

“Ten years ago the Russian budget balanced if oil was around $20 a barrel; today it needs to be around $103.”

Yeah, and ten years ago you could buy a coffee in London for 50p and not the £5 a cup it costs now. This “balance-the-budget” price of oil is another myth.

What you need to look at is the non-oil budget deficit (the federal budget deficit Russia would have if you magic all the oil and its revenue away). In the boom years of 2006-2008 Russia was running a health budget surplus, but it as also running a non-oil budget surplus of about 1%. In other words it had broken its addiction to oil as the real economy was producing enough tax revenue to finance everything before a dollar of oil tax money was received. That changed in 2008 when the non-oil deficit when down to 14% and the state poured rescue money into the economy, but has recovered somewhat since and the plan is to take the non-oil deficit back to about 4-5%. In other words the government was to modest subside the budget with oil money. It is actually an extremely reasonable plan and how the budget was run in the first half of the last decade.

However, in the 90s the non-oil deficit was over 25% of GDP. In other words under Putin the fiscal oil dependence has steadily decline as that service sector and other industries increase their share of the economy, but the crisis was a big set back – and thank god for that oil as it is the cushion that has given Russia a soft landing.