Lower End of the Market Adds to China’s Mass Appeal

If 500 stormtroopers posing on the Great Wall of China don’t give a film a boost, then nothing will. As markets digest the implications of the Federal Reserve’s interest rate decision, the launch on Thursday of the latest Star Warsinstalment speaks to another key trend for next year: the Chinese consumer.

Luxury goods sales there are still dropping at an alarming rate. This week Pradareported a 26 per cent slump in its China business and LVMH has begun closingsome stores. But there is growing interest in the power of another type of Chinese consumer — the more regular, less flashy sort. Incomes for China’s poorest 40 per cent are rising at about 9 per cent a year — more rapidly than for the better off, according to Gavekal Dragonomics. The middle 40 per cent has greater spending power, so they drive the bulk of consumption and overall consumption growth is still likely to slow. But investors should think about sectors that could get a boost from the bottom 40 per cent. The sheer numbers involved would be significant if, as elsewhere, their extra funds go towards better quality goods and experiences.

More lipsticks and cosmetics might be one example. China’s biggest beauty chain, AS Watson, is still reporting double-digit rises in skincare sales — and adding up to 1m members to its loyalty scheme each month.

Another gainer could be cinemas. Only 9.2 per cent of China’s personal spending in 2013 was on “fun” experiences such as going out and travel, according to Goldman Sachs — about half the level of the US. Box office receipts have risen more than 40 per cent this year. China was responsible, for example, for a quarter of the cinema take for the seventh film in the Fast & Furious franchise, for example.

Disney will still need all its skills to promote Star Wars in China, since a fan base for the Galactic Empire isn’t a given in the Middle Kingdom. It had very few consumers when the franchise launched in 1977. 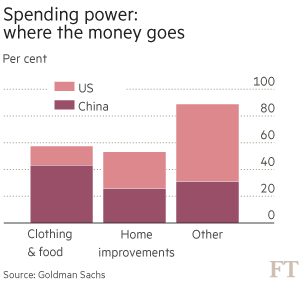 But the importance of China to Disney is just one example of the growing power of the country’s average consumer, not just the Prada-toting types. A few extra cinema trips by those still focused on getting by won’t change China’s economic path — but given the numbers, it doesn’t take a lot of extra “fun” being had to make a big difference to some industries.