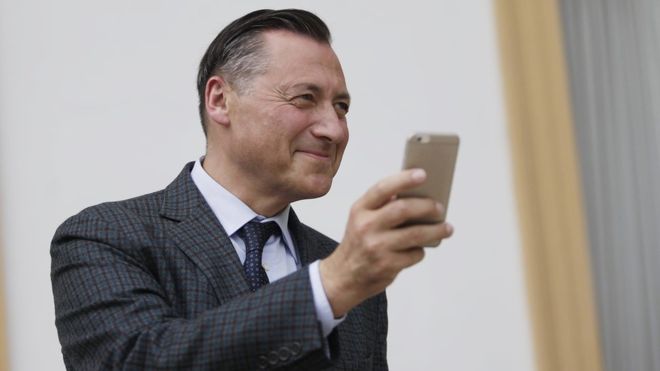 The joint venture, PowaTag UnionPay, will launch first in Guangdong Province, targeting 400,000 retailers, the company says, before rolling out to one million by the end of 2016.

“We have a target to reach at least 50 million consumers regularly using the platform within one year from launch,” said PowaTag UnionPay’s chairman, Mr Hu Jinxiong.

China’s merchants – there are six million in total – will pay about 13p per transaction to the joint venture for access to the technology, said Mr Wagner.

The PowaTag system relies on digital tags – quick response (QR) codes – that can be attached to physical goods or inserted into self-service checkout screens, emails, websites, posters, images – even the audio from TV ads.

Wherever Chinese shoppers see the PowaTag UnionPay symbol they will be able to buy products by scanning them with their phones and tapping the “buy now” button, the company says.

US retail giant Walmart recently launched a similar quick pay system for mobiles in its stores.

China’s Commerce Department says the “online to offline” market, whereby shoppers search for products online then complete the purchase in-store, grew 80% in the first half of 2015 and is worth about £31bn ($47bn).

“Why did China UnionPay decide to partner with a little British technology company?” said Mr Wagner. “We’ve trumped ApplePay and the rest of the world here.”

State-owned China UnionPay, has been responding to the rapid take-up of smartphones across the country – about 68% of the population now has one.

On 12 December, it launched QuickPass – a “tap-and-go” payment system for mobile phones similar to Apple Pay and other digital wallets – in co-operation with more than 20 commercial banks.

QuickPass is already available at more than 10,000 locations in mainland China, says UnionPay, including at retailers such as Carrefour, McDonald’s, and Costa.

“The Chinese market is going mobile very quickly,” says Mr Birch. “And the integration of payment systems and messaging platforms such as WeChat is a very interesting development.”

This latest deal with Powa will give Chinese shoppers yet another way to shop using their mobiles.