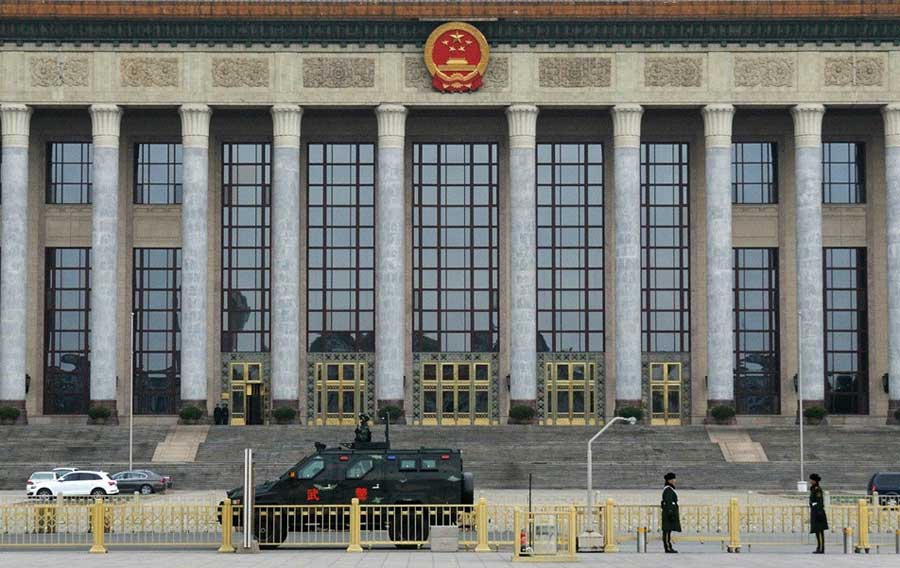 China set this year’s growth target in the range of 6.5 to 7 percent, following 6.9-percent economic growth in 2015, according to a government work report delivered by Premier Li Keqiang at the sessions of the National People’s Congress and the Chinese People’s Political Consultative Conference National Committee, briefly called “two sessions.”

This year’s target is aligned with China’s goal of completing the building of a moderately prosperous society in all respects, and takes into consideration the need to advance structural reform, Li said.

It also marked the first time in two decades that China adopted a range for its growth target rather than a specific number.

This decision was “a bit of a strategic choice” made by the Chinese government, said David Dollar, a senior fellow with the Brookings Institution and a former official of the World Bank and the U.S. Treasury Department.

“I think the government wants to signal that they believe the growth is stabilizing,” Dollar told Xinhua in a recent interview. “They’re emphasizing the growth is maybe slowing down a little bit but it’s pretty stable.”

While this range is lower than last year’s target of around 7 percent, “it still sends a strong signal to the market that the government is resolved to keep growth momentum at a rate that is above potential,” the Institute of International Finance (IIF), a global association representing about 500 financial intuitions, said Thursday in a research analysis.

Tamim Bayoumi, a senior fellow at the Peterson Institute for International Economic, said the world has to get used to that China is moving towards “a slower but more stable growth rate,” as the country is making the transition to “much more of a consumption-based economy” from the old growth model mainly based on investment into manufacturing and export industries.

The fiscal and monetary policies are expected to become more accommodative this year to support growth, according to the government work report.

This year’s budget deficit-to-GDP ratio was raised to 3 percent, up from 2.3 percent last year. The growth of M2, a broad measure of money supply that covers cash in circulation and all deposits, was proposed to be 13 percent, one percentage point higher than last year’s target.

Dollar applauded the Chinese government for the tax cuts and expenditure increases in the health and education announced in the government work report, as he believed the fiscal policy is very effective to rev up slowing economic growth.

China “has a lot of scopes to increase fiscal stimulus” if it needs to, as the country has definitely low central government debt relative to the GDP, he said.

“Unlike monetary easing, which works by lowering domestic interest rates, fiscal policy can support aggregate demand and near-term growth without creating an incentive for capital to flow out of the country,” Bernanke said Wednesday in a blog post. “A targeted fiscal approach would also serve the goals of reform and rebalancing the economy in the longer term.”

The government work report also reaffirmed the importance of the supply-side structural reforms, a popular notion proposed by China’s policymakers last November as the latest remedy for economic ills caused by breakneck growth.

“Structural reforms are to focus on addressing overcapacity problems, improving productivity, lowering the tax burden on enterprises and facilitating access to credit, addressing imbalances in the property market and strengthening financial supervision,” the IIF said.

Dollar said supply-side structural reforms are very essential if China wants to continue growing well, noting that he was particularly impressed by the announcements of advancing the hukou (household registration system) reform and opening up more service sectors in China to foreign investment.

“The government work report doesn’t have a lot of specific details, so we have to see how comprehensive these plans are in 2016, but those are moving in a very good direction,” he said.

Dollar said the languages about the handling of the “zombie companies” in the government work report indicated the government wants to implement the state-owned enterprises (SOE) reforms and reduce overcapacity in a very gradual and cautious way.

“Protecting the interests of SOE employees will be a major task in the next step” of SOE reforms, Xiao Yaqing, head of the State-owned Assets Supervision and Administration Commission, said at a press conference Saturday.

The reform will mainly be pushed forward through mergers and acquisitions, instead of bankruptcies, Xiao said, adding that China will not experience another upsurge in layoffs like the one seen in 1990s’ SOE reforms.

As restructuring has mainly involved mergers within the SOE sector, the IIF also said it does not expect widespread failures or losses to be imposed in the new round of SOE reforms that could threaten employment or create systemic risk in China.

Dollar said it’s good for China to gradually get rid of the excess capacity as “quite a few workers will lose their jobs,” but he warned that there’s a risk in the financial sector if China does not move quickly enough to do that.

“Banks are holding a lot of loans taken out by those zombie enterprises. When you close enterprises, you’re going to do some kind of clean-up when you take the bad loans off the banks’ balance sheets. There really needs to be done pretty quickly,” he said.

Zhou Xiaochuan, governor of the People’s Bank of China, the central bank, said Saturday that reform of China’s financial regulation system is under discussion and that there’s no global consensus regarding the system.