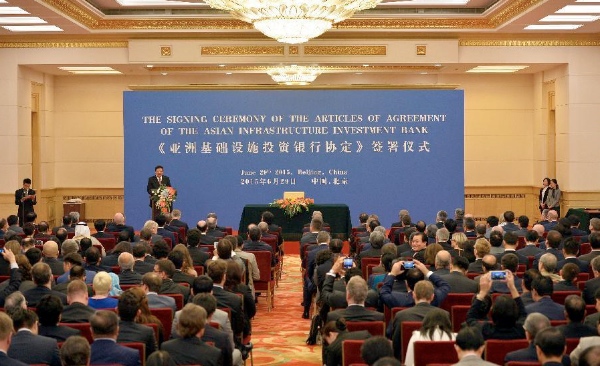 Lawmakers voted on the agreement at the closing meeting of the bimonthly session of the National People’s Congress (NPC) Standing Committee.

With China being the largest shareholder, the ratification is a significant step closer to the AIIB’s formal establishment slated for the end of 2015.

The China-backed multilateral development institution is tasked with financing infrastructure development across Asia.

With an authorized capital of $100 billion, the AIIB will finance infrastructure projects like the construction of roads, railways, and airports in the Asia-Pacific Region.

BRICS members China, India and Russia are the three largest shareholders, with a voting share of 26.06 per cent, 7.5 per cent and 5.92 per cent, respectively.

Among the bank’s 57 prospective founding members, 54 had signed the agreement as of last month, and the other three are expected to sign before the end of this year.

All prospective members should have their legislatures ratify the agreement before the end of 2016 to formally become founding members.

As long as at least 10 signatories, with capital contribution no less than 50 per cent, obtain legislative approvals, the agreement will become effective, Finance Minister Lou Jiwei told lawmakers.

Lou said Myanmar, Singapore and Brunei have received legislative approval, adding China’s ratification, with more than 30 per cent in capital contribution, is crucial to the bank’s timely operations.

The 60-article agreement outlines the financial shares of each founding member as well as rules for policymaking, governance structure, and business and operational systems.

The Bank will base its headquarters in Beijing.

The bank will cooperate with other multilateral and bilateral development organizations to promote regional cooperation and deal with challenges, according to Lou.

The AIIB will extend China’s financial reach and compete not only with the World Bank, but also with the Asian Development Bank, which is heavily dominated by Japan.

China and other emerging economies, including BRICS, have long protested against their limited voice at other multilateral development banks, including the World Bank, International Monetary Fund and Asian Development Bank (ADB).

China is grouped in the ‘Category II’ voting bloc at the World Bank while at the Asian Development Bank, China with a 5.5 per cent share is far outdone by America’s 15.7 per cent and Japan’s 15.6 per cent share.

The ADB has estimated that in the next decade Asian countries will need $8 trillion in infrastructure investments to maintain the current economic growth rate.

“Some critics argue that the AIIB will reduce the environmental, social and procurement standards in a race to the bottom. This is a childish criticism, especially because China has invited other governments to help with funding and governance,” he writes.

The US and Japan have not applied for the membership in the AIIB.

However, despite US pressures on its allies not to join the bank, Britain, France, Germany, Italy among others have signed on as founding members of the China-led Bank.

Meanwhile, New Zealand and Australia have already announced that they will invest $87.27 million and $718 million respectively as paid-in capital to the AIIB.