China: in Pursuit of a New Development Pathway 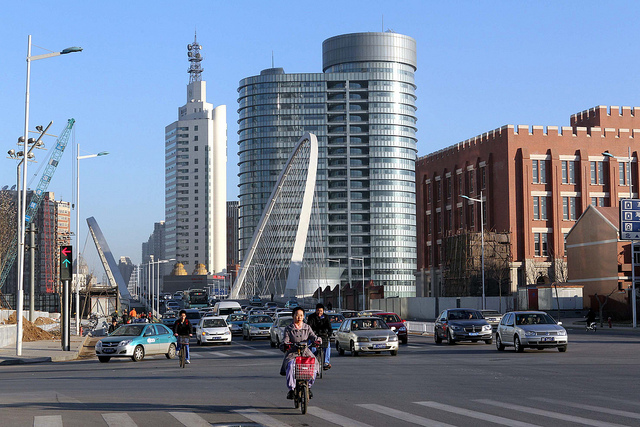 More than 180 countries have submitted their intended national climate plans to get on a low-carbon development pathway ahead of COP21 climate talks, now underway in Paris.

Called the Intended Nationally Determined Contributions (INDCs), most include mitigation targets to be implemented by 2025 or 2030. But these plans are not just about numbers. Many of them, particularly those put forward by developing countries, also propose climate actions within the countries’ overall development framework, including adaptation. Hardly surprising, as after all, tackling climate change is about effectively managing a country’s economy.

​This certainly seems to be the case for China.

China’s INDC includes a package of “hard” targets, such as greenhouse gas emissions peaking around 2030 and achieving a non-fossil fuel share of 20 percent in the primary energy mix by the same year. And it also outlines ways to integrate climate change-related objectives into the national economic and social development plans.

Today at the COP’s Chinese Pavilion, Chinese experts presented a discussion paper, “Pursuing an Innovative Development Pathway – Understanding China’s INDC,” that provides timely analysis of the China plan. (The full report is expected to be released in March 2016). With support from the World Bank Group’s Partnership for Market Readiness, and prepared by a key Chinese research institution, it shows China’s economic development is at a crucial turning point.

In essence, it’s about the effectiveness of a growth model that lifted 600 million people out of poverty and adjusting it as China becomes a middle-income country. The Chinese government has made it clear it wants to focus on rebalancing its economy towards a ‘new normal’, adjusting to a lower but steadier growth, and emphasizing innovation and cleaner technologies. The INDC can be seen as playing a pivotal role in propelling China on this innovative development pathway.

Today, China’s GDP is USD 7,500 per capita. According to the INDC, China’s emissions are expected to peak when GDP reaches around USD 14,000 per capita, corresponding to 8.2 tonnes of CO2 emissions per person, mainly based on fossil fuels.  The average for OECD countries is much higher. The United States, Canada and Australia saw peak emission values at 20 tonnes of CO2 per capita while the European Union and Japan peaked at around 10 tonnes per capita.

Clearly for China, economic development is an imperative. The challenge is to achieve that while bending the arc of emissions.

How can China grow and improve the quality of life of its citizens – many of which still do not have access to basic services, like electricity – while avoiding a traditional development and emissions trajectory?
Meeting the INDC targets implies that significant improvements in the energy intensity per unit of GDP and carbon intensity of energy consumption is necessary.

Also, a wider range of policies and measures are likely needed to help meet the INDC targets. These include lowering CO2 emissions per unit of GDP by between 60 to 65 percent below 2005 levels and increasing the share of non-fossil fuels in the primary energy mix. It can be seen as a challenge. At the domestic level, factors including GDP growth rates, population growth, urbanization and new economic structures will all affect the implementation of the INDC.

Manageable technology costs will also be a factor. China is relying on Carbon Capture and Storage (CCS) technology to achieve a large-scale reduction. Today, CCS technology is costly and remains in a testing phase. China is also planning to use renewable energy at scale – while maintaining a reliable supply of electricity for the country’s population of 1.4 billion people.

But technologies associated with the integration of high penetrations of renewables in a grid have not yet been demonstrated at the scale needed by China. While there are challenges and uncertainties, the implementation of the INDC offers tremendous economic opportunities and environmental benefits.

Achieving the INDC targets brings the promise of clean air and blue skies. This is part of China’s push for “ecological civilization” that will have health benefits and result in lowered medical bills. Research also shows that low-carbon policies have a net positive impact on jobs, in particular in the renewable energy, transport and construction sectors. New jobs may appear in energy conservation, environmental protection, new energy, and energy-efficient transport.

When China’s Special Representative for Climate Change, Mr. Xie Zhenhua, visited the World Bank last year, he indicated that China is learning from lessons based on its past development pathway. There has been a price to pay for “polluting first and cleaning up later.” As the world’s largest developing country, China is ready to share this lesson with other developing countries.