BRICS Bank Board of Directors Meet in Shanghai 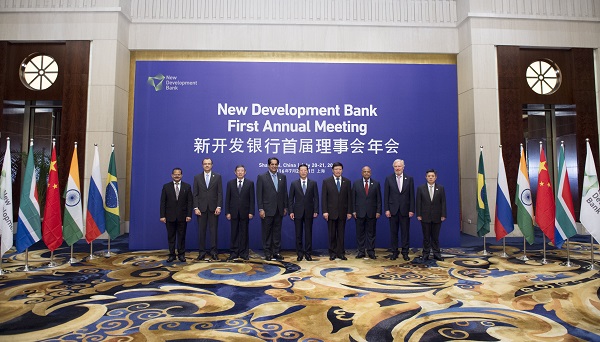 Infrastructure financing needs of the five BRICS countries was discussed at the annual meet of the New Development Bank’s board of directors in Shanghai on Wednesday.

The NDB was launched by the BRICS nations last year and is seen by its members as an alternative to the World Bank.

“The BRICS nations and developing countries will have a greater say in global economic governance,” he said.

BRICS members like India and South Africa are struggling with infrastructure deficit.

India needs over $1.5 trillion in investment in the next 10 years to bridge infrastructure gap, India’s Finance Minister Arun Jaitley said at the BRICS Bank Board of Governors meet last month.

The NDB Board of Directors on Wednesday approved funding for its first Russian project: the development of a small-scale energy project in Karelia.

“Today we have approved our project in Russia for $100 mln,” Kamath said. Kamath is a former executive of India’s largest private lender, ICICI Bank.

“In this one year, we have put in place all our major operational policies and procedures. The Board has approved the first set of projects with a total commitment of USD 911 mln, which covers all our five member countries. All of these projects are broadly in an area of renewable energy and through our first set of loans the Bank has begun the process of establishing its credentials as an institution that supports green and sustainable infrastructure,” Kamath added.

The bank also plans to extend finance to private sector.

“As a first step we are developing our own operational policies on that front (private sector) loans without sovereign guarantees; We have to build capacities in terms of people. It will take next six months to do that. Some time in the middle of the next year, I hope we will start looking at private sector projects in member countries. That will bring innovation,” the President of NDB Kamath said.

An emailed statement said NDB Director and Russian Deputy Finance Minister Sergei Storchak stressed that “the Bank has become a part of a big family of multilateral development banks, showing that emerging markets can agree quite quickly and effectively on such an initiative”.

Storchak expressed confidence that “with the establishment of the NDB its members have embarked on providing a new orientation to the global financial system”.

The BRICS Bank announced on Tuesday that it has successfully completed its first green financial bond issuance of 3 billion yuan ($448 million), with a five-year term and interest rate of 3.07 per cent.

Brazil, Russia, India and China officially grouped together in 2009, with South Africa joining later, to press for a bigger say in global financial matters.

The NDB, which is headquartered in Shanghai, started work last year.