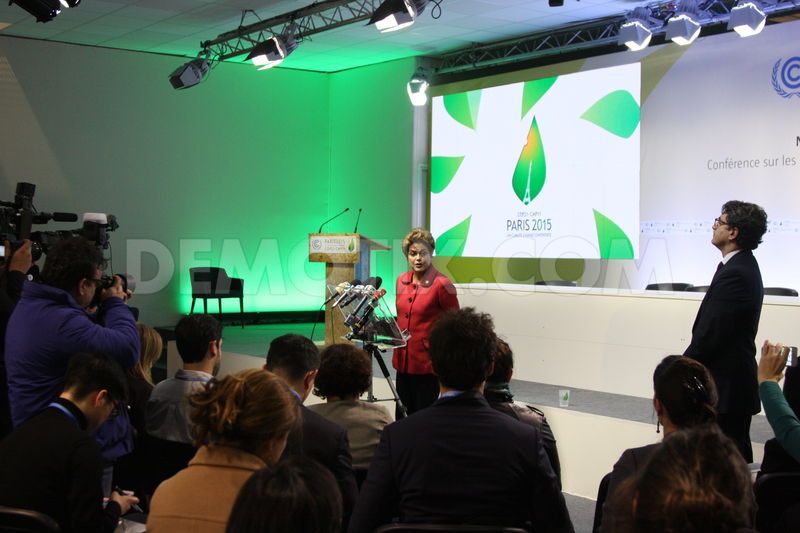 With leaders from around the world gather in Paris for the United Nation’s Climate Conference, COP 21, Brazil’s President Dilma Rousseff put forth the country’s ambitious goals to alleviate climate changes. The U.N. Conference will end on December 12th and is expected to produce legally binding agreements for the reduction of GHG emissions from countries across the globe.

“Climate change is one of the biggest challenges the world faces today,” said Rousseff during her speech on Monday morning at the COP 21 meeting in Paris. “The [climate] agreement should not be the sum of well-intentioned plans, they should state the paths we should take.The implementation of the new agreements, financing and transfer of technology should assure that all countries have the necessary means to reach our common objective.”

According to Rousseff, Brazilians are already feeling the effects of climate change with drought in the North/Northeastern regions and floods in the South. Rousseff also mentioned the environmental disaster in Minas Gerais after dams burst and flooded the region with water filled with residues from a mining plant.

Brazil has already announced that it has set a target to reduce gases which cause the greenhouse effect by 37 percent until 2025 and by 43 percent until 2030. According to Rousseff this reduction is well beyond the country’s ‘contribution’ to global-warming.

Brazil’s President told U.N. representatives and global leaders that low-carbon farming processes were being implemented throughout the country and that Brazil continues to expand its renewable energy matrix. “Our challenge is to replant and restore 12 million hectares of forest and another 15 million hectares of degraded pasture land,” added Rousseff.