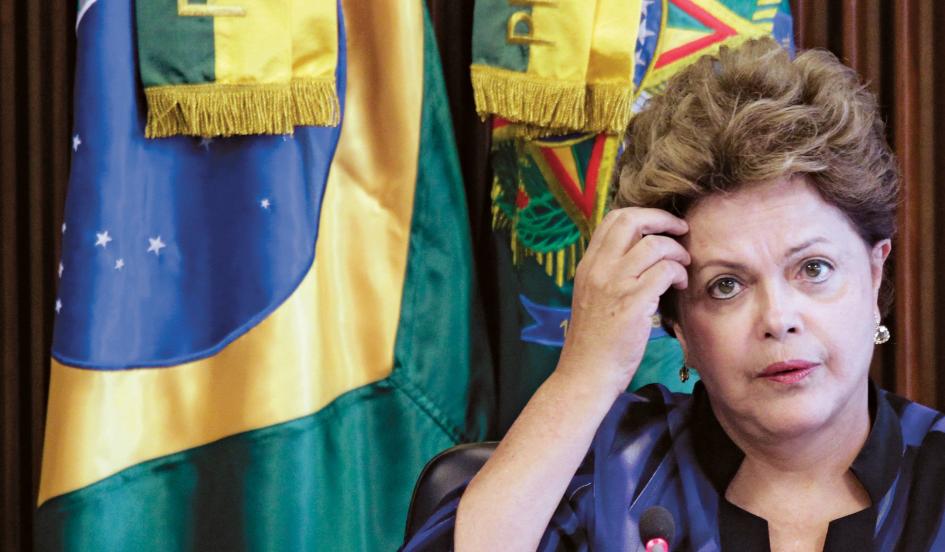 In Brazil, General Motors Co. has been halting factories and laying off thousands. Latam Airlines, the region’s biggest, is cutting flights. And the world’s third-largest planemaker, Embraer SA, is delaying its biggest new aircraft.

In the midst of its deepest economic and political crisis in a generation, Brazil is contending with a business climate so punishing that major projects across numerous sectors are being frozen or shrunk, while small businesses slash prices and shift focus.

“Political instability is enormous, and it’s paralyzing Brazil,” said Eduardo Fischer, co-chief executive officer at homebuilder MRV Engenharia & Participacoes SA, in an Aug. 5 interview. In Brasilia, the nation’s capital, “decisions and actions that need to be taken are being delayed, questioned or defeated, and nothing happens.”

Carambola’s, a juice and sandwich shop in Sao Paulo’s financial district, saw a 30 percent drop during lunch starting a couple of months ago. The corner store fired two employees, and closes earlier as customers stop coming in after-hours.

“People are bringing lunch from home,” Rafael Bruno da Silva, the afternoon manager, said on a recent day as a lone customer sipped coffee. “We’ve lowered the prices of juice, but it doesn’t seem to be making much of a difference.”

Opposition lawmakers and many in the public are calling for the resignation of President Dilma Rousseff, whose popularity has sunk to a record low. The senate and lower house presidents are being investigated in an alleged kickback scheme that funneled money from state-run Petrobras, the world’s most indebted oil company, to political parties in the biggest corruption scandal in history.

On top of that, the economy is forecast to contract 2.01 percent this year, inflation is above the central bank’s target and unemployment is at a five-year high. Brazil’s real is the worst-performing major currency in the world this year.

The crisis is reminiscent of the 1990s, when clerks were hired to re-sticker prices at grocery stores throughout the day because of hyperinflation. For others, it is a new and frightening experience.

“Younger generations haven’t lived through any volatility,” said Fernando Perlatto, a professor of sociology at the federal university of Juiz de Fora. “That contributes to uncertainty. People are cutting costs, not getting married, and such. At the university, we’re not booking any conferences, trips or academic events.”

That means less business for airlines, where corporate demand has dropped by as much as 40 percent. Latam Airlines Group SA’s Brazilian unit, Tam, last month announced a major cut in seats and said Monday it’s planning its flights with “caution and flexibility.” Rival Gol Linhas Areas Inteligentes SA last week announced a decrease of up to 4 percent. Both have lowered prices in recent months.

Janaina Rueda, the owner of the popular downtown Sao Paulo steak restaurant Bar da Dona Onca, is trying a different tack. She is taking advantage of the availability of cheap labor and shifting her focus.

“We’re opening a place next door with a pork theme because it’s a much cheaper meat,” Rueda, 40, said. “I’m opening a business in the middle of an atomic bomb, but I did build the place for just 1 million reais, a third of what it would have been a year ago, because we were able to bargain down prices.”

Rueda doesn’t want to raise prices for her customers. She’ll tolerate breaking even for a couple of years until, she hopes, the economy turns around.

Andrea di Russo, manager at Zahil, an imported wine store, fears it won’t be just two years. So she is adding wine clubs and classes to boost income as she notes a change in the way her clients shop. At the high-end Emporium Sao Paulo supermarket, manager Edmilson Ferreira said he is negotiating deals with suppliers to offer sales on basic items in hopes that his clients will stick around to buy more-expensive goods.

“People are buying lower-cost wines because they’re worried,” Zahil said. “We’re trying to keep the prices as is, and hoping for the currency to stabilize.”

Embraer, the best-selling regional jetmaker, had been counting on new products to boost revenue, including the KC-390, a military transport aircraft. The plane was supposed to be sponsored and purchased by the Brazilian government. Instead, Embraer, which is awaiting payment of $370 million, has delayed the production date by a year.

“I do not expect 2016 to be much better than 2015,” Chief Executive Officer Frederico Curado said in a call with analysts on July 30. “What we do not expect is new surprises like what we had this year.”

Brazil’s carmakers also have watched demand plummet, with sales down 20 percent in the first half of this year compared with the same period in 2014, carmaker association Anfavea said. Both GM and Volkswagen AG are temporarily shuttering factories and putting workers on leave. They declined to comment.

MRV, Brazil’s second-biggest homebuilder, isn’t moving ahead with many new projects as it awaits approval of additional funding for low-income housing, a cornerstone of Rousseff’s Workers’ Party. In May, the government announced that it was freezing billions of reais in spending, including 5.6 billion reais for the housing program.

“We need to get through this,” Fischer, the CEO, said. “Our goal today is to just get over this soap opera, or Brazil won’t move forward.”