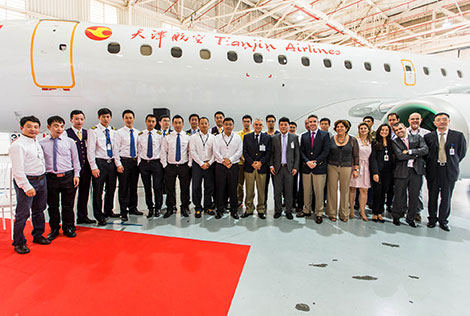 Brazilian aeronautical company Embraer delivered two E195 jet aircraft to Tianjin Airlines, a company that became the first customer of this aircraft model in China, Embraer said in a statement.

Embraer also said, according to the statement issued in São José dos Campos, that these two E195s, with a maximum capacity of 124 passengers, were part of a contract that Tianjin Airlines signed in 2014, during the visit of Chinese President Xi Jinping to Brazil, for the purchase of 20 E195 jets and 20 E190-E2 jets.

Guan Dongyuan, senior vice president of Embraer and chairman of Embraer China, noted at the time that Tianjin Airlines was not only the company’s biggest customer in the Asia/Pacific region but also the manager of the first Embraer authorised service centre in China.

Embraer Aviação Comercial has an 80-percent share in the Chinese regional aviation market and to date has delivered 130 aircraft, of a total of 188 firm orders, 21 of which are pending approval from the Chinese government. (macauhub/BR/CN)