MUMBAI | NEW DELHI: Three global automobile powerhouses either have started operating their India factories round the clock or are in the process of doing so to meet increasing export demand, in a resounding endorsement of the Prime Minister’s call to make in India.

For the past six months, Ford Motor’s manufacturing facility in Tamil Nadu is running three shifts a day, which is uncommon in the American carmaker’s global operations.

Europe’s largest carmaker, Volkswagen, is set to start a third shift starting next week, while the US No. 1, General Motors, is expected to add another shift from the beginning of next year.

Interestingly, these companies aren’t doing so well in the Indian market, and the incremental output is to cater to markets in Latin America, Europe and Africa.

The Economic Times spoke to several vendors who supply parts to these carmakers and they said while the domestic market is expected to grow by a single digit, the likes of Ford India, General Motors India and Volkswagen India are targeting 20-60% jump in 2016 production, clearly indicating their export plans. While these carmakers have a market share of less than 3-4% in India, experts say high export volume is helping them make local operations viable. 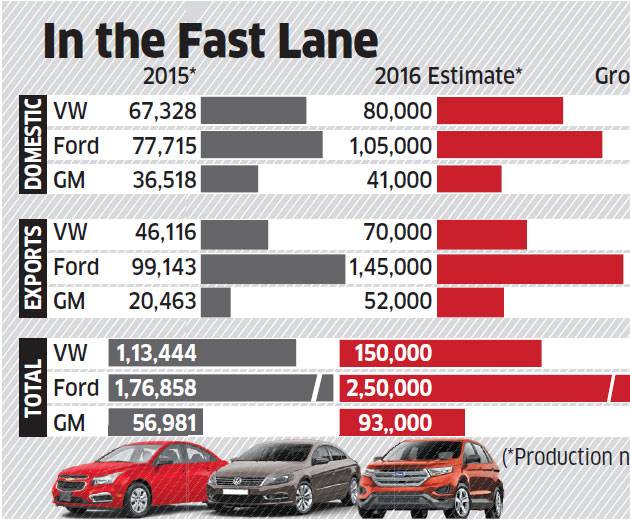 Automakers have committed to invest billions of dollars in India, enticed by the local market opportunity in the long term as well as its frugal manufacturing capabilities and abundant skilled manpower, which offer a cost-effective environment to make small cars and sell them at competitive prices internationally.

In fact, even before Narendra Modi made the call to make in India a year and half ago, making in India for the world had already become part of global carmakers’ strategy and boardroom discussions. Hyundai Motor and Maruti Suzuki have long been shipping India-made cars to foreign markets, even as they ruled the domestic market as well. Companies such as Nissan and Renault, too, target foreign markets with compact vehicles produced in India.

But now, with the government’s new push to promote manufacturing in India, companies are further expanding production and exporting more, even though the domestic market remains stuck in the slow lane.

“We are committed to position India as a global centre of excellence for manufacturing small cars and low-displacement engines,” said a spokesperson for Ford India, which is churning out the EcoSport compact SUV for the global markets from its plant near Chennai.

“Our unflinching commitment to India is reflected in the aggressive implementation of our growth plans, including more than $2 billion we have invested here so far,” he said.

Volkswagen and GM are witnessing strong demand for their India-made cars in Mexico – for the Vento and Beat, respectively. The Vento is already the segment leader in the Latin American country, where it sells double the number compared with India.

Volkswagen India Managing Director Andreas Lauermann said going past the capacity of the two-shift system due to higher demand is an important milestone for the company.

“Volkswagen Pune plant will start off with the third shift soon and will ramp up the production over the year. This step is necessary due to the rising demand from exports as well as domestic market, especially through the new Ameo. Exports have helped VW to create a natural hedging against the weak Indian rupee and fluctuating domestic demand,” Lauermann said.

The Ford India spokesperson said, with the recently inaugurated manufacturing facility at Sanand in Gujarat and the Chennai factory, the company is well on course to triple its exports from India and sell made-in-India products in nearly 50 markets over next five years.

With demands of Indian customers also aligning to global markets, it is becoming easier for carmakers to serve global markets of Europe and other developed markets out of India.

The quality of cars produced out of India has also improved to such a level that Maruti Suzuki will be exporting Indiamade Baleno hatchback to Japan and Ford will be shipping the EcoSport to North America starting 2017.