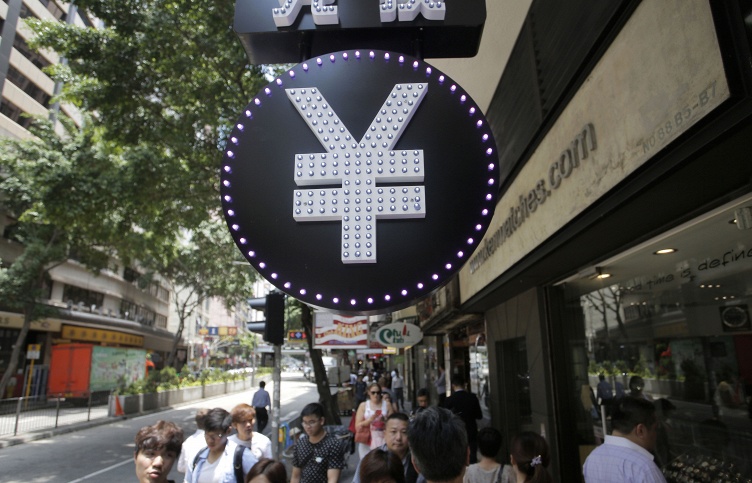 MOSCOW, October 14. /TASS/. China’s yuan, which may well become a world reserve currency in the foreseeable future, already looks as a growing challenge to the US dollar, and the odds are it may steadily proceed along these lines, Russian analysts say.

China’s yuan is already the world’s most widely spread currency: just three years ago it was in twelfth place, but by now it has caught up with the main rivals – the US dollar, the euro and the British pound, as follows from a report by the international bank system SWIFT.

The share of the yuan in global settlements last August was up from 2.34% to 2.79%. Yuan-denominated trade transactions in August climbed by 9.13%, while those made in the other currencies shrank by 8.3%; currency exchange deals were up 20% in just one month and up 50% over the previous twelve months, SWIFT said.

In January-August 2015 the yuan had for the first time become China’s number one currency in settlements with near neighbours in the Asia-Pacific Region. The Japanese yen was second, the Hong Kong dollar, third, and the US dollar, fourth.

The People’s Bank of China last week launched the global international payment system (CIPS) – a counterpart of SWIFT – with the aim to bolster the yuan’s liquidity on the world money markets. China would like to see its national currency included in the IMF’s basket of reserve currencies, called Special Drawing Rights (SDR).

“Currently the SDR basket consists of four world currencies: the US dollar, the euro, the yen and the British pound,” the Russian government-published Rossiiskaya Gazeta quotes the director of the foreign economic research centre at the Russian Academy of Sciences’ Institute of US and Canada Studies, Mikhail Portnoy as saying. “The yuan is now to join in. China has been systematically promoting its currency to the world market. Already now it performs settlements in the national currencies with 24 countries.”

“The yuan may gain the status of a world reserve currency in two years from now,” Professor Aleksandr Abramov, of the Higher School of Economics, has told TASS. “For this it is to get less volatile. In fact, excessive volatility was the sole obstruction in its way to the list of the currencies that form the reserves of international financial organizations.”

At the same time Abramov finds it hard to predict if the yuan will ever become the dominating currency, because “it requires the national economy should be the dominating one in the world.” “The yuan will be a reserve currency and its authority will keep growing, but it is too early to say it may offer strong competition to the US dollar.” At the same time, Abramov said, the share of the US dollar in world transactions declines slowly but surely as the US share in the world economy shrinks.

“The replacement of reserve currencies is a very slow process,” assistant Professor Sergey Khestanov, of the Russian presidential academy RANEPA, has said. “The process of ousting the pound sterling lasted for about 45 years. Even if one assumes that the role of yuan began to grow about 20 years ago, in any case the yuan will become the dollar’s worthy rival at least in two decades’ time. But on the other hand, the Chinese economy’s growth rates are higher by far than those of the US, so the role of the dollar will reduce somewhat sooner or later, while the yuan will propel itself to a far more significant position.”

“Yuan has already recaptured some space from the dollar, but not as much as China would like to,” the head of oriental studies at the Higher School of Economics, Aleksey Maslov, has told TASS. “China has been shifting almost all of its trading relations with partners to settlements in the national currencies, thereby phasing the dollar out of circulation.”

True, the yuan may become a world currency, but that will happen no earlier than 2018-2020, Maslov predicts. “The United States is firmly against. Formally, because the yuan is unstable and fails to meet a number of requirements, such as no free fluctuations inside the Chinese market. But the real underlying reason is this: the United States does fear that China may establish itself as a major financial power, because many countries will then eagerly convert part of their reserves into yuan-denominated assets. This will not only strip the United States of some of its strengths, but also make China much stronger. If that happens, China will find itself in a far more advantageous position at many negotiations.”