While India’s Economy has Turned the Corner, Wider Reforms are Needed to Boost Economic Growth 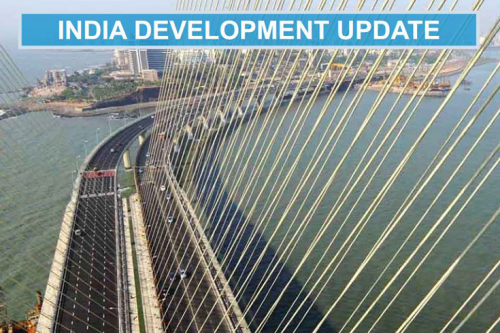 India’s Government has announced an ambitious development agenda supported by a three-pronged strategy – promoting fast and durable economic growth, especially in manufacturing, together with a stable macroeconomic environment; involving states as active development partners; and improving the delivery of social benefits and extending social safety to the elderly and the underprivileged. The World Bank’s India Development Update, April 2015, says that if this agenda is successfully implemented, it carries great promise of an acceleration in economic growth that is also inclusive and sustainable.

The report points out that India’s government has begun to implement reforms to unlock the country’s investment potential – to improve the business environment; liberalize FDI; boost both public and private investment in infrastructure; quickly resolve corporate disputes; simplify taxation, and lower corporate taxes. States are set to receive more resources and spending power, and the government has reiterated its resolve to implement the GST by April, 2016, a move that is widely expected to meaningfully increase India’s tax to GDP ratio. New models of delivering benefits through direct transfers to bank accounts, together with the biometric identification of beneficiaries, are expected to reduce leakages.

The report adds that a favorable external environment, particularly the sharp decline in the international prices of oil, metals and food, has helped to improve the economic outlook significantly. Growth has accelerated, inflation has declined, the current account deficit has narrowed, and external reserves have increased. GDP growth (at market prices) is projected to accelerate to 7.2 percent in FY2015, compared to 6.9 percent in the previous year and further to 7.5 percent in FY 2015-16.

Nevertheless, the economic outlook is subject to both external and domestic risks, the report says. A rapid increase in oil prices is a key risk, and global growth remains constrained, particularly in several of India’s trading partners.

A tightening of US monetary policy can have a disruptive impact on India’s exchange rate and financial markets. While the Reserve Bank of India has built reserves to reduce India’s external vulnerability, the risk remains, warranting vigilance.

On the domestic front, the report points out that boosting private investment will be crucial to bridge the yawning infrastructure deficit and support the favorable growth outlook. With India’s tax-to-GDP ratio remaining stubbornly low, the country will need to explore alternative channels of long term investment, and revive PPP model of financing. Additional fiscal space can be generated by increasing the tax-to-GDP ratio, and improving tax administration and compliance.

Importantly, the outlook for new investments continues to be dented by the debt overhang in the corporate balance sheets, which has extended to the Public Sector Banks (PSB). The banks’ balance sheets are currently marred by high non-performing loans, low profitability, and subdued credit growth, and may not be able to support higher demand for credit in a robust turn–around of the investment cycle. While some measures have been announced to strengthen the balance sheets of PSBs and to improve their operational efficiency, the report says that more decisive measures will be needed given the magnitude of recapitalization required.

The report adds that the potential for rapid export growth in the near term remains constrained by both supply and demand conditions. On the supply side, Indian merchandise exports have not been able to keep pace with the growth in world exports. On the demand side, the global export market seems to have peaked. India will need to increase its manufacturing competitiveness significantly to carve a space for itself among the world’s large exporters. For this, the country will require an infrastructural boost to bring it at par with the world’s manufacturing hubs, in addition to the competitive supply of labor, land, finance, and skills, as well as a friendly business environment.

In sum, the report says, the pace of reforms will need to be maintained or even stepped up to meet the country’s development goals.  Devolving more policy space to the states may produce enclaves of competitiveness and help garner further support for wider reforms among India’s people and political classes.

The report adds that MGNREGS – amongst the world’s largest anti-poverty programs with over 50 million beneficiary households at its peak and expenditures between 0.5 and 1% of GDP – is an important pillar of India’s social protection system. The program has an in-built self-targeting mechanism as it is structured in such a way that poorer households will be more willing to participate. Aside from supporting wage incomes, it can be used to create assets for the poor that are durable and productive; for example, it can help regenerate the natural resource base, and rehabilitate roads to expand rural connectivity. A guarantee of employment can also provide crucial insurance benefits from shocks.

The program’s performance record is mixed. Paradoxically, the scheme has worked less well in poorer states, where it is needed the most. Program outcomes can be improved by enhanced public information and a more responsive supply side. A second, and complementary, direction for reforms it to ensure that the assets created are productive and support private enterprise.  These spillover effects to the private labor market and agricultural productivity are essential to maximizing the benefits from the scheme, over and above its impacts as an income transfer.