The South African economy expanded by a real 1.7 per cent quarter on quarter (q/q) at a seasonally adjusted annualised basis in the third quarter 2015 if measured on the expenditure basis the South African Reserve Bank (SARB) said in its latest Quarterly Bulletin. This is more than double the 0.7 per cent gain as estimated by Statistics South Africa (Stats SA) on a production basis. 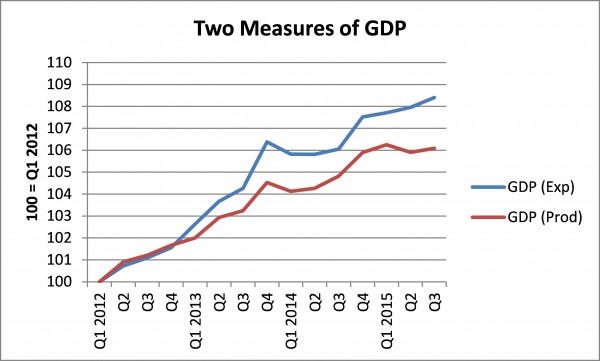 Most economists, including those at Treasury, use expenditure measures to forecast GDP growth, while the official GDP growth is that provided by Stats SA.

Finance Minister Nhlanhla Nene singled out electricity shortages – partly blamed on mismanagement at Eskom – as a “binding constraint” on GDP growth, forecast at an anaemic 2 percent this year.

« Markets Dismayed by New South African Finance Minister» India: FDI in Services Rises 20% to $1.46 Billion in First Half of FY16