Sieren’s China: Through the Side Door

2015/11/26 By YANG YANG in HomePage Featured, Trade and Investment Promotion Activities Tags: China, One Belt and One Road 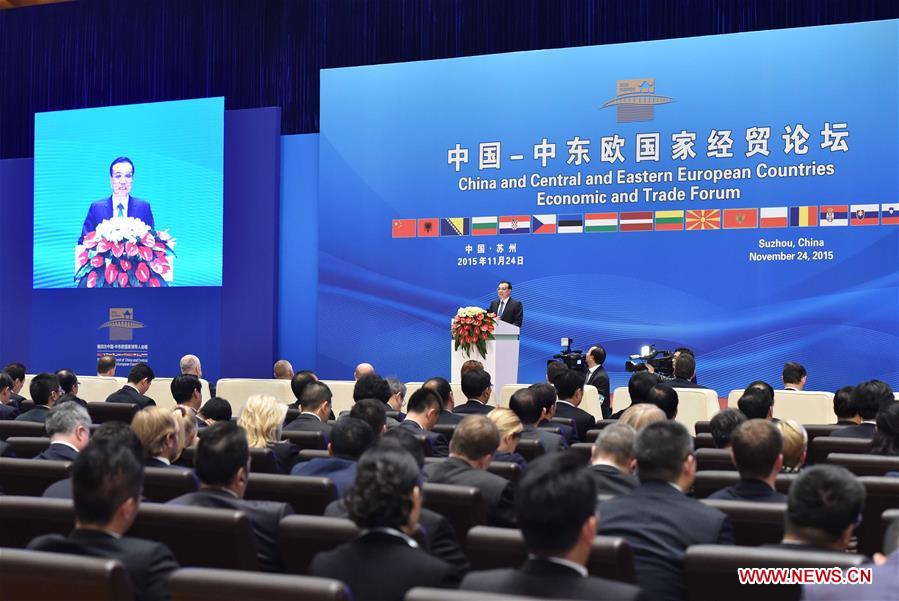 This week, relations between China and Eastern Europe are entering a new phase. Western Europe should take an interest in the newest meeting between the 16+1 countries because it concerns them, says Frank Sieren.

China and 16 European countries launched an economic platform in 2012, to the annoyance of the European Union because Beijing did not consult it on the matter. The Chinese government insists on doing business with sovereign states as long as they want this, arguing that it has nothing to do with Brussels. And the sovereign states want to do business.

The relationship that China has developed with some of the CEE, Central and Eastern European Countries, is simply called 16+1, and right now has more Eastern European countries than Central European ones. The countries have developed joint projects, made agreements and profited from one another for over three years now.

It is not without ulterior motives that China is investing in Eastern European with the region’s economic problems. On Tuesday and Wednesday (24./25.11) of this week, the participants are meeting for the fourth time; and for the first time in China. China’s Prime Minister Li Keqiang has invited the European heads of state to Suzhou near Shanghai. Later, the Chinese President Xi Jinping will receive his counterparts in Beijing. It is the first time that China is concentrating on Eastern Europe alone.

The 16+1 is not a debating club. Since the first meeting in Warsaw, several projects have been launched successfully – mainly in infrastructure and the energy sector, to help put Eastern Europe back on its feet.

In the energy sector, China has given Romania one billion dollars to build a new coal-fired power plant. Two weeks ago, Xinhua reported that a declaration of intent had been signed, according to which China General Nuclear will build two new blocks at the country’s Cernadova nuclear power facility.

China is also helping to build a thermal power station in Serbia, a country with 7.2 million inhabitants. Last year, the first Chinese-built bridge in Europe was inaugurated there. At the beginning of this year, Beijing signed a deal to modernize a 370-kilometer train-line from Belgrade to Budapest. And in Macedonia, two new stretches of highway will be built for about 580 million euros, financed by a Chinese bank.

It is not only about creating better networks in Eastern Europe itself, but also between China and Eastern Europe. For about two months now, there has been a direct flight between Prague and Beijing, while the first direct train connection between Poland and China was launched back in 2013. A container now needs 15 days to go from Chengdu to the third-biggest city in Poland, Lodz.

These are all projects for which Brussels seems to have neither time nor money – a gap in the market that Beijing is rightly exploiting. In 2010, the trade volume between China and the CEE amounted to 43.9 billion dollars. Last year, it had risen by 17 billion to nearly 61 billion dollars. The European countries are also grateful to Beijing in political terms.

These projects also fit in with one of China’s most important foreign policy projects, the new Silk Road, which will connect China and Europe, like the famous trade routes of the past. Beijing plans to invest $40 billion dollars in the first phase and to this aim has launched the Asian Infrastructure Investment Bank (AIIB) with a registered capital of $100 billion. Germany is also a founding member of the bank.

The formula is simple: The better the infrastructure of the 16 states, the more successful the new Silk Road project will be. At the last 16+1 meeting in December 2014, China’s Prime Minister Li Keqiang announced that China wanted to support the region with at least 10 billion dollars. Now, a competition for Beijing’s favor has flared up in Eastern Europe. Polish President Andrzej Duda already has some ideas about the important role Poland could play in the Silk Road project: His country could become a kind of logistics center. A start has already been made with the Chengdu-Lodz train line.

Through its involvement with Eastern Europe, China is, of course, also seeking new access to the West, through the side door so-to-speak. Brussels is to blame for having neglected Eastern Europe for too long. Eastern Europe turned to Asia when it realized that it was not high on Brussels’ list of priorities. When China’s Foreign Minister Wang Yi visited the region last month, not only Poland, but also the Czech Republic and Bulgaria, showed a big interest in playing a central role in the new Silk Road project. Wang said that China was not only interested in nurturing partnerships with old powerhouses such as Britain, Germany or France but with all governments in Europe. This fits right in with the “New Beginning, New Fields, New Vision” slogan of this year’s 16+1 meeting in China.