On Sunday evening, President Zuma delivered a second major surprise to capital markets in the space of just five days by announcing that, after receiving numerous representations to reconsider the appointment of David Van Rooyen as Minister of Finance, he had decided to reverse the decision and appoint the well-known and highly regarded Pravin Gordhan as Minister of Finance. 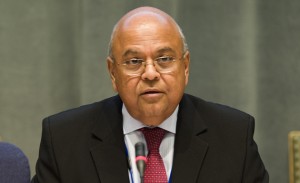 We view this in a most positive light. In the short time since Van Rooyen’s appointment, the Rand fell from an already weak level of R13.60/US$ on Wednesday evening to R15.85/US$ on Sunday evening. Within a few hours of Zuma’s announcement on Sunday night to recall Van Rooyen, the Rand gained 80 cents against the US$, strengthening from R15.85/US$ in the late evening to R15.00/US$ by midnight.

The impact of Zuma’s first shock decision to replace the well-regarded and respected Nhlanhla Nene with Van Rooyen extended well beyond the currency market fall described above. On Thursday and Friday the South African equity market lost R230bn in value and the bond market lost R217bn in value. The combined loss of R437bn equates to between 10 percent and 15 percent of the South African economy, depending on what gross domestic product (GDP) estimate and currency rate is used. With the South African economy growing at a nominal rate of around six percent per year, it means that the loss of R437bn wiped out the equivalent of two years’ worth of economic growth from South Africa’s savings pool.

We are particularly encouraged to note that Zuma has the ability to listen to reasoned argument, to respond accordingly and to put his country first. He had made a poor decision that was badly communicated, lacked any evident motivation for the public good and was particularly ill timed ahead of this week’s US Federal Reserve Committee meeting. Whilst Zuma’s about turn to recall Van Rooyen and appoint Pravin Gordhan was met with surprise, the clarity of his communication and the motivation he offered for the appointment of Gordhan shows that Zuma has learnt a lot in a few days.

Having served as Minister of Finance from 2009-2014, Gordhan brings an exceptional track record of fiscal prudence. His position will be strengthened by the events of the last few days. His achievements and experience give us a high degree of confidence in his ability to calm market nerves, reverse some of the economic and financial damage that has been done in the past few days and restore confidence in South African macroeconomic policy and fiscal discipline.

Of course, it is impossible for Gordhan to immediately reverse all of the damage of the last five days, especially given the recent ratings agency calls on South Africa and the country’s anemic growth rate. That said, under the experienced and prudent hand of Pravin Gordhan, investors can anticipate careful attention being given to critical aspects of fiscal policy, including fiscal consolidation, debt profile stabilisation, ceilings being placed on runaway current expenditure and state-owned enterprises being held accountable for their spending programmes.

What this appointment serves to underline is that markets and the business environment constantly have the capacity to surprise and thus adopting a long-term investment strategy is the most prudent option. As we pointed out in our note of last week following the appointment of Van Rooyen, our investment position is designed to cater for risk as well as uncertainty – or what might also be termed unknowability – and there is no reason to alter them in light of the new circumstances. Diversification remains a highly effective way to hedge against different risks and uncertainty that investors face and this enables us to deliver on our investment mandates.

While we acknowledge the great calming effect that Gordhan has had on the financial markets we still expect volatile markets in 2016 with notably low returns, and although the South African economy looks in better shape today than just a few days ago, economic growth will stay low and price inflation is headed higher. Our investments are well positioned to cater for this likelihood and we maintain our overweight positions in global equity, global property and global hedge funds; overweight South African hedge funds; and overweight protected equity, which offers a valuable defensive element.