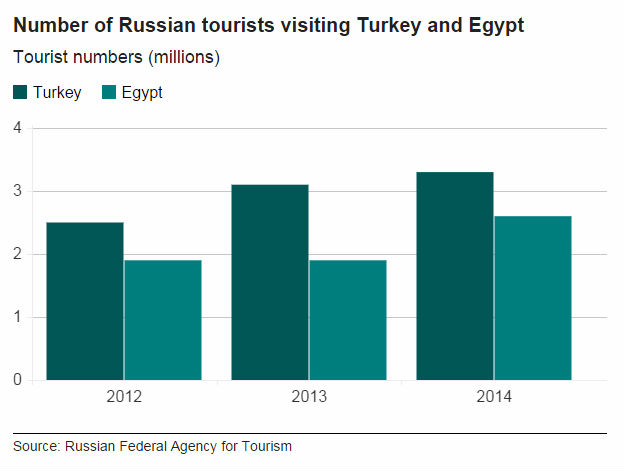 This week brought the first real snowfall in Moscow, along with the news that yet another winter getaway is off-limits.

But Russians have responded with defiance to the ban on holidays to Turkey.

Many see the move as appropriate payback for the shooting down of a Russian fighter jet, described by a furious President Vladimir Putin as a “stab in the back”.

It’s the second popular destination to be banned in under a month. Flights to Egypt were halted in early November, following a terror attack on a plane full of Russian tourists.

“Some things are more important than beaches, the sea and all-inclusive holidays,” anchorman Dmitry Kiselyov boomed in his influential weekly news round-up on state television.

When Egypt’s beaches became inaccessible, many Russians were re-directed to the Turkish coast.

Still, people here seem broadly resigned to what has happened – even supportive.

“I think it’s the right response. Turkey has shown it’s a traitor,” said Andrei, taking a cigarette break from work, out in the snow.

“According to the news, they are working with IS so I don’t think it’s safe there,” he added.

That is the message that President Vladimir Putin has stressed for the past week.

He has accused Ankara of siding with terrorists by targeting a jet conducting airstrikes in Syria, against what he says were armed extremists.