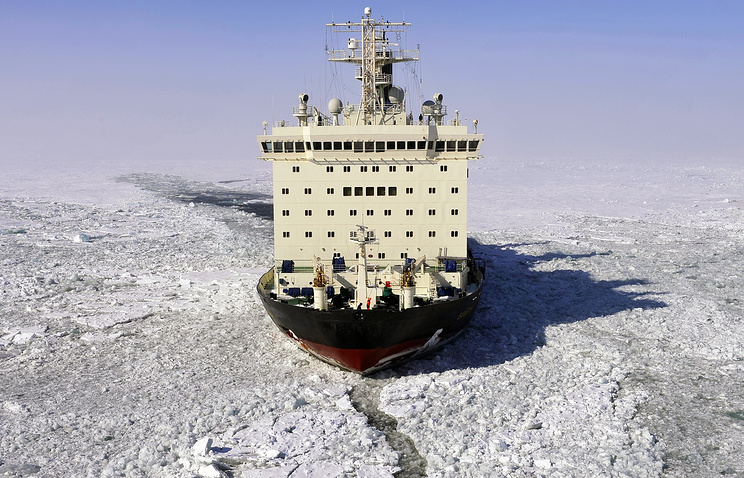 Sustainable development of the Russian Arctic zone is impossible without urgent upgrade of the nuclear and diesel icebreaker fleet, experts say.

Presently, for smooth work of the Northern Sea Route Russia uses more than 30 diesel-electric and four nuclear icebreakers, but the fleet is getting outdated, head of the Arctic and Antarctic Council at the Federation Council (parliament’s upper house) Vyacheslav Shtyrov told TASS.

“Three of four icebreakers should be out of exploitation between 2020 and 2022,” he said. “Most diesel-electric icebreakers of Rosmorport (sea port authority) are to be out of work by 2017-2019.” For observing the national interests, Russia should urgently renew technologically it nuclear fleet.

Many experts point to the problem of the fleet’s development and renovation. A member of the Academy of Sciences’ Council Mikhail Grigoryev told TASS about the outdated fleet and the lack of icebreakers. “We have three shipping companies – Murmansk, Severnoye and Lenskoye, which have been working on the Northern Sea Route,” he said. “They do not have enough funds for construction of a new fleet, as the country still does not have “long” or “cheap” money, nor it is available from abroad – thus we face outdating of the fleet.” The situation with icebreakers, the expert said, “is also alarming.”

Some experts say the Russian icebreaker fleet has been developing lately. “About 8-10 years ago we said our icebreaker fleet – both nuclear and diesel – is aging,” chief designer of the Krylov ice-class vessels center Valery Belyashov said. “A new generation of diesel and nuclear icebreakers is under construction: the series of two-draft nuclear icebreakers 22220 “The Arktika” (Arctic), “The Sibir” (Siberia) and “The Ural” (Urals), which will replace the outdated icebreakers of the Arktika type and various diesel-electric icebreakers.”

Rosmorport’s Director General Andrei Tarasenko told TASS the company owns 36 diesel icebreakers, and the fleet’s key task is to escort vessels at Russia’s 15 freezable sea ports. “For 2018, we plan taking in exploitation a diesel-electric icebreaker of 22600 project “The Viktor Chernomyrdin”, with the energy power of 25MW, and which can escort vessels along shores of the Northern Sea Route the year round,” he said.

The designer said the diesel fleet is being renovated also at expense of companies working in the Russian Arctic zone. For example, the Norilsk Nickel Company owns a fleet of ice class. “Thus, they can have the year-round supplies of products to Europe by own vessels, and the company’s fleet has six vessels of enforced ice class ARC7 – five container vessels of the Norilsk Nickel type and one tanker The Yenisey,” the company’s representative told TASS.

Experts share the opinion – the demand in icebreakers will be only growing with the growing cargo deliveries along the Northern Sea Route as major economic projects are implemented in the Arctic.

Some experts say for serving the Arctic routes only Russia would require 14 icebreakers, including six nuclear, four diesel and four supply icebreakers for drilling pads. However, Senator Shtyrov says the icebreaker fleet should be much bigger.

“The plan is that by 2030 the cargo deliveries along the Northern Sea Route will grow to 80 million tonnes, which means we should have a permanent sea route, which can be exploited all the year round, without any breaks,” he said. “This is a huge task, for which we should first of all have enough icebreakers based on new technologies.”

Designer Belyashov said the Russian shipbuilders can satisfy the demand. “With the plans for development of the transport system – to transport from Yamal LNG 15 million tonnes, and another 15-17 million tonnes of liquefied natural gas via the Arctic LNG-2 terminal, which is under construction now, the demand for icebreakers will grow. Coal from Taimyr and oil from the Tanalan deposit soon will be transported from the area next to the Dudinka port. Oil and ore producing companies would not be able to work without reliable transportation systems, thus a new generation of icebreakers is being built right on time. Taking into account all these plans, two more universal icebreakers of project 22220 should be built, too,” he added.

As for building of nuclear icebreakers, head of the nuclear fleet state-run company Atomflot Vyacheslav Ruksha told TASS about construction in St. Petersburg of a series of three LK60 universal icebreakers (“The Arktika,” “The Ural” and “The Sibir”). “LK60 would be replacing gradually the presently working icebreakers,” he said.

Besides, the Ministry of Industry and Trade supports technical design of the Lider (leader) project of the icebreaker of future. This icebreaker would provide the year-round work along the Northern Sea Route. “Thus, Russia would be able to compete with traditional routes of cargo deliveries from the West to the East,” the designer said.

“What Russia really lacks is mighty technical vessels. For example, we do not have strong cranes, drilling ice vessels,” the deputy prime minister said. “<…> Not many can build vessels of the kind, which can work in the complicated Arctic conditions. This is a promising direction for the Russian industries – such a vessel may be used in any waters of the world, but its reliability will be the highest.”