Russia and India Move to Settle in Own Currencies 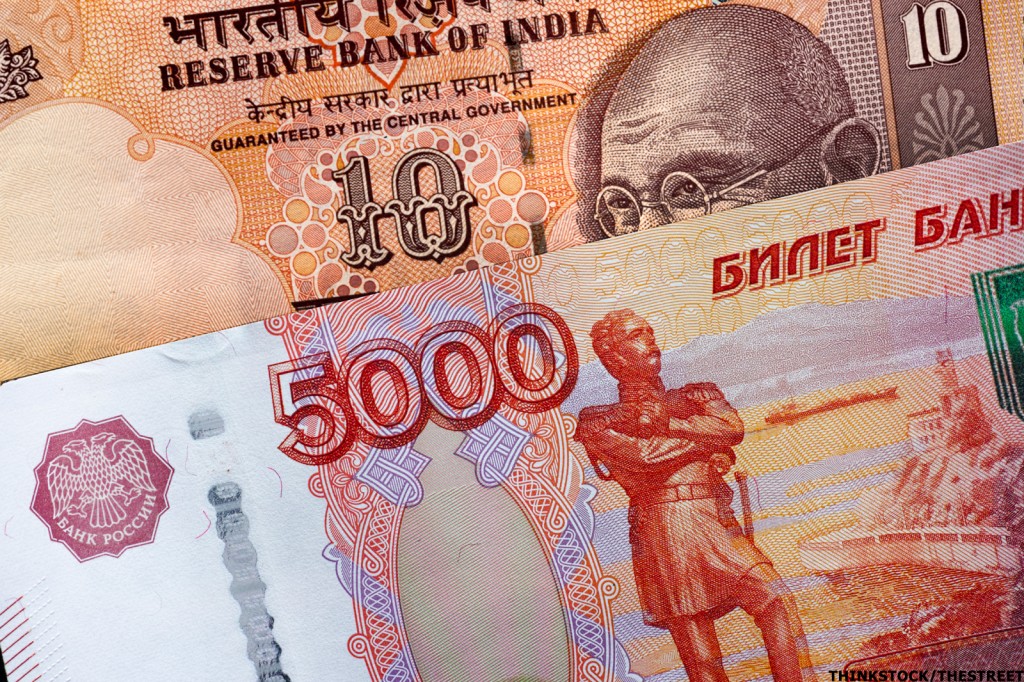 Hedging risks can help Russian and Indian business communities dislodge the American dollar from mutual settlements. The transition to settlements using national currencies was among the key issues in the joint statement released by Prime Minister of India Narendra Modi and Russian President Vladimir Putin after their summit in New Delhi on December 11, 2014.

“Our countries shall encourage the use of national currencies when making mutual settlements in bilateral trade,” the leaders said.

The statement was preceded by a meeting, organized by the Russian and Indian central banks, of a working group on bilateral trade payments in national currencies. Work began immediately to prepare recommendations to promote such payment operations in bilateral commerce.

“The main objective of the work was to identify possible barriers to making settlements using national currencies, and to determine the readiness of banking systems to implement and develop models for use of rubles and rupees in mutual trade transactions,” said Yaroslav Tarasyuk, Russian trade representative in India, in a conversation with Rossiyskaya Gazeta. “Avoiding the use of third-country currencies in mutual settlements will help to reduce the final cost of Russian products and improve their competitiveness in the Indian market. This is a tool that will support Russian exports and facilitate mutual trade,” he said.

The analysis by the working group showed that no serious regulatory obstacles existed to carrying out settlements in rubles and rupees on sales contracts. The experts proposed two standard models of calculations, which generally correspond to existing commercial practices followed by the banks of the two countries. If deemed necessary, these could be modified.

Nevertheless, the problem lies in the fact that the banking systems are not yet able to actively respond to the demands of the business communities.

“Banks of the two countries are not yet ready to actively carry out settlements in national currencies. To do this, first they would need to open branches of national banks in the respective countries. However, only two Russian bank branches operate in India, while in Russia there is just one Indian bank operating,” a source close to the Indian banking industry told Rossiyskaya Gazeta.

In addition, because India-Russia trade is relatively small in volume (last year it was just over $9 billion), the transition to settlements in national currencies could result in the supply of rubles and rupees remaining unclaimed. In the case of China, for example, such a problem does not exist. The volume of trade is several times greater with China, so the demand for the yuan exists in Russia.

The possibility of a wider practical application of the proposed models, as well as measures to reduce transaction costs when making settlements using national currencies is being discussed by the business communities of the two countries. Indian companies are now ready to move to this profitable scheme, but fear financial losses due to the fluctuations in the ruble exchange rate.

“Dropping the use of the dollar in mutual settlements is undoubtedly beneficial for both countries, since this would reduce banking expenses. However, the volatility of the ruble is now the biggest obstacle to the full transition to a mutual settlements system using national currencies,” Rossiyskaya Gazeta learned from Ajay Sahai, Director General of the Federation of Indian Export Organizations (FIEO).

However, according to Russian banks’ representatives, the risks of currency fluctuations are not so great, and all necessary conditions needed to carry out mutual settlements in national currencies have already been created.

“Fluctuations in the exchange rate of the ruble are not the real reason. The greater reason is that the rupee is also unstable. All the conditions for making settlements using national currencies have already been created, and many companies are actively using them. Our bank is also involved in this process. Changes in exchange rates may only have an adverse effect when it comes to long-term contracts, where payments are made ​​in tranches at intervals of six months or a year. In all other cases there are no problems,” says Vladislav Voytsekhovitch, manager of the bank branch in India of Sberbank Russia.

According to him, even when it comes to long-term contracts, all major exporters resort to the practice of hedging, by which, in addition to real goods and services, they purchase futures contracts that reduce the risks of currency fluctuations. These, however, also reduce profits.

“All those involved in serious business, have long used hedging instruments. Of course, mainly the big players, because such insurance also costs money, and small and medium businesses find it unprofitable to use such risk insurance,” said the banker.