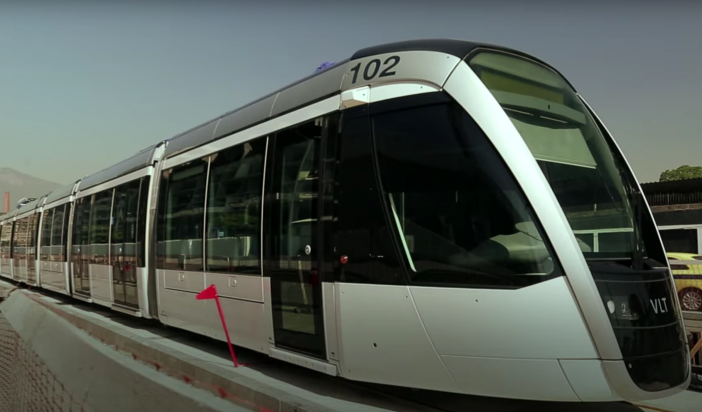 The Vehiculo Leve Sobre Trilhos (Vehicle on Light Tracks) completed its first set of tests with passengers last week (November 22nd) in Praça Mauá, with the train reaching a distance of 150 meters. Mayor Eduardo Paes attended the test and even drove the train, with the guidance of a French engineer.

For the test, the VLT was stationed next to the Museum of Art of Rio (MAR), and with low speed moved to its final destination for the test, the statute of Barão de Mauá.

The first train for the VLT system, which receives electricity only from its tracks and does not need areal power cables, arrived from France and began testing back in July.

The VLT will connect Rio’s Centro, Port Zone and domestic airport Santos Dumont and is set to start circulating with passengers in April 2016. At the tests last week, Mayor Paes confirmed that work for the train is on schedule, saying “Soon, people will see the VLT on [Avenue] Rio Branco.”

According to government press, literary teacher, Catherine Schumann, took her students to see the event, and received permission for her and her students to be passengers during the test. “It was a very positive experience for its comfort and tranquility. The ride on the tracks is quite smooth,” said Schumann. “All transportation should be like this in Rio. Too bad its not.”

Of the 32 stations that are part of the light rail train system, only three (Rodoviária, Central and Barcas) will have turnstiles for entry and exit of passengers. For the remainder of the stops, the payment of the fare will be optional and voluntary, a situation that is unprecedented in the Brazil and will call upon the good faith of the population. “There will be ‘total freedom’, said Paes. “It is a cultural change. We are betting on respect from citizens. This experience in civility will be important.”

The estimated cost of the VLT is R$1.157 billion, with R$625 million supplied by Public-Private Partnerships (PPPs) and the remaining R$532 million coming from federal funds and the government’s growth acceleration program, better known as PAC (Aceleração do Crescimento). Completion of the work on the VLT lines is scheduled for 2016 before the Olympics and Paralympics games begin in the city.