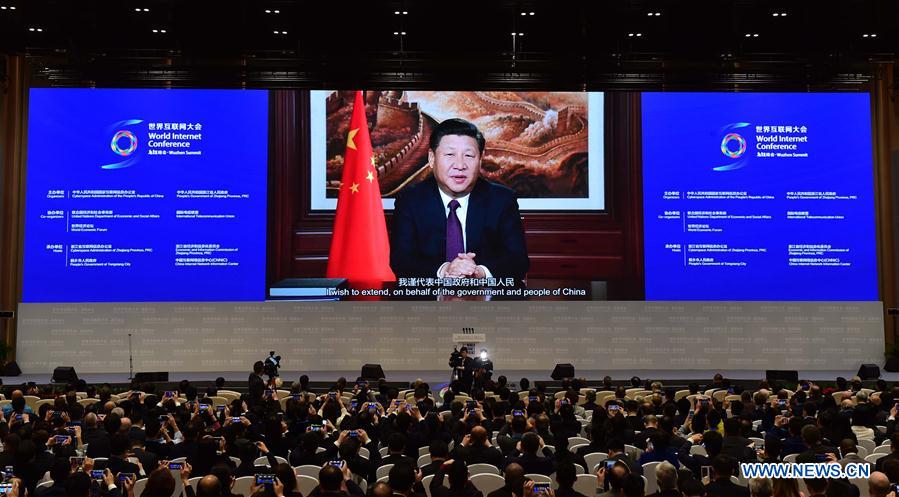 Chinese President Xi Jinping on Wednesday called for increased international cooperation in cyberspace governance and the building of a cyberspace community of common destiny.

Noting that Internet development has no boundaries, Xi said China is willing to work with the international community for the common welfare for all people, to uphold the concept of cyberspace sovereignty and to make the global cyberspace governance system fairer and more reasonable.

Xi made the remarks while giving a speech via video at the opening ceremony of the third World Internet Conference (WIC) in the riverside town of Wuzhen, east China’s Zhejiang Province.

Liu Yunshan, a member of the Standing Committee of the Political Bureau of the Communist Party of China (CPC) Central Committee, attended the opening ceremony of the WIC and delivered a speech.

The Internet is changing the global economic and security situation, so that building a cyberspace community of common destiny is a pressing demand in an information-led world, Liu said.

China is willing to strengthen policy coordination and cooperation with other countries, Liu said, calling for the improving of cyberspace governance rules, respecting cyberspace sovereignty and safeguarding all countries’ equal rights in developing, joining and governing cyberspace.

Liu also called for the building of a multilateral and transparent global Internet governance system, cooperation in Internet innovation, and network popularization, in a bid to make the Internet benefit all peoples of the world.

Cooperation should be strengthened in coping with cyberspace security challenges, in a bid to safeguard state security, public interests and citizens’ legitimate rights, according to Liu.

Themed “Innovation-driven Internet Development for the Benefit of All — Building a Community of Common Future in Cyberspace,” the third WIC runs from Wednesday to Friday.

Over 1,600 Internet entrepreneurs, opinion leaders, experts, officials and heads from over 110 countries and regions as well as international organizations attended.