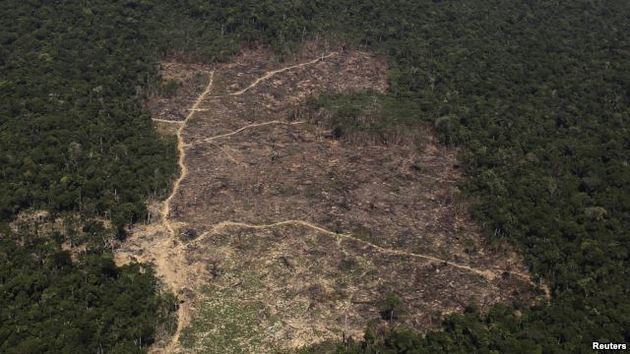 Brazil’s sharp reduction of deforestation in the Amazon has cut its carbon footprint 40 percent since 2000, but the country must do more to reach a sustainable environment, the Organization for Economic Cooperation and Development said Wednesday.

The South American country should increase the use of green taxes to curb rising levels of carbon dioxide emissions in its rapidly growing cities, the OECD recommended in an environmental performance review of Brasil.

It must also deploy more people and resources to manage protected areas that have been critical in combating deforestation, and reconcile biodiversity conservation with economic development, notably in agriculture, the OECD said.

A new forestry code, a rural environmental registry and a tradeable forest quota system should be fully implemented to help conservation and be complemented by programs for more attractive livelihood options to discourage illegal clearing, it said.

The area under environmental protection, critical in combating deforestation, has expanded to 17 percent of Brazil’s territory, but most areas are understaffed and have no management plan, the review found. Environmentally-friendly tourism should be encouraged in these areas, it recommended.

Annual forest clearing in the Amazon has declined by 75 percent from its mid-2000s levels, though the current pace still means a loss of forest the size of Slovenia every four years.

On the climate-change front, the drop in greenhouse gas emissions due to a dramatic decrease in deforestation has more than offset rapid growth in emissions in the agriculture and energy sectors that today account for the bulk of emissions.

A decade of economic growth, urbanization and rising income levels has boosted demand for energy and natural resources, doubled the vehicle fleet and raised environmental pressures.

Brazil should make wider use of environment-related taxes, which accounted for just 1.9 percent of total tax revenues in 2013, compared with a 5.1 percent average for OECD countries, the review said.

Moreover, Brazil’s green taxes are not linked to the carbon content of fuels, and fossil fuel use is taxed at lower levels than in many other countries, the OECD said.