First, a confession: I am opposed to the Hindutva ideology. I believe the BJP wants to stamp out pluralism, buttonhole the religious minorities, has a puerile, comical sense of history, and isn’t engaged in flattening the hierarchical social order.

It places me on the other side of the fence separating BJP supporters from the rest. This was why I wasn’t delighted at Narendra Modi becoming the Prime Minister in 2014.

There were other reasons as well – for instance, his past, symbolised by the 2002 riots, the many stories from Gujarat about his authoritarian style of functioning (It can’t be called authoritative, as some have tried to depict it as), and the uprooting of the state’s farmers, whose land was acquired at cheap rates. 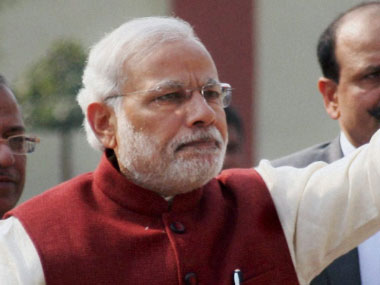 On his completing a year as Prime Minister, I haven’t turned into a Modi bhakt. But, as a critic of the BJP and Modi, I have been grappling with the questions: Are there qualities in him worthy of appreciation? Would I include these qualities in my conception of the ideal politician?

It has indeed been mesmerising to see Modi spawn hope among people, of turning their future better than their present. You’d say every national leader attempts that. But Modi had hope sweeping across India before the 2014 election not through tiresome iteration of complex policies, but by coining the catchy phrase of achche din aane waale hain – because Modi was to come to power.

A politician hoping to acquire enduring popularity must have people believe in his ability to transform their lives. There always lurks in us the fear that our hope is illusory, a fantasy. But Modi allayed this fear in people because he imbibed a sense of self-belief in them, forever harping that their dormant talent was waiting to blossom in the sunshine of his rule. He gave them a sense of their own qualities and possibilities. For many, voting for Modi seemed akin to voting for themselves.

Modi is also strong-willed, which is a quality a successful leader should possess. Such a leader is expected to overcome opposition to his or her vision of a better future – and implement it. There are competing visions, in fact as many as there are parties, on the path the nation should take. This can be evinced in the conflicting views on, say, the land bill, NREGA, direct transfer of subsidy funds to bank accounts, a common syllabus for all central universities, etc.

It’s debatable whether Modi would compromise on his vision, regardless of its efficacy, for he believes in the idea of power which celebrates those who can impose their will on others. This has been easier for Modi to achieve than his predecessors in the last 25 years because of the majority he commands in the Lok Sabha. His allies consequently don’t defy him, as also his Cabinet colleagues and party MPs.

But it isn’t just about his circumstance. His will to power was on display in the initial months of his tenure in power in Gujarat, refusing to accommodate his detractors and gradually weeding them out of the party. This inclination he has brought to Delhi as well, dwarfing leaders such as Rajnath Singh and Sushma Swaraj. One way of looking at Modi’s insistence on portraying himself as the boss is that it prevents multiple points of power from emerging, dispels confusion and promotes stability.

The third admirable quality of Modi is his apparent lack of diffidence in tackling tasks of which he has little experience. For instance, take his handling of foreign policy, about which he knew little. To his credit, in every annual report card prepared by newspapers and TV channels, he has scored the highest for his handling of foreign relations.

True, it takes a long time to assess concrete gains accruing from a new government’s foreign policy. It is also possible Modi has been marked high because of the buzz around him on his foreign trips. Much of it has been because of the cheering NRIs, keen to indulge in a long-distance romance with their country of origin.

Nevertheless, it shows he is not hamstrung by the fear of failure as, say, Rahul Gandhi is, as he’s busy touring states where the Congress isn’t yet a ‘has been’. Had Modi been in Rahul’s shoes, he’d have headed for Gujarat, where Congress hasn’t won an election on its own from 1985.

You can’t be a leader of reckoning unless you have the daring in you.

Fourth, he is an excellent communicator, boasting a philosophy of his own. Its principal thrust is to saturate the popular consciousness with his images, leaving no space for others. His strategy is double-pronged. One, don’t give direct access to the mainstream media; no face-to-face interviews to Indian journalists. It ensures he won’t make a faux pas and spend time defending or denying it, nor be asked a tough or embarrassing question. Inaccessibility has created a mystique around him. Who is he? What’s he about? What does he believe in? Any leader wishing to acquire prominence seeks this mystique – and Modi has managed it well.

The second prong of his media strategy is to build himself as a credible counter to the mainstream media. He has therefore chosen to become both the medium and the message. He is his own advertisement. His twitter handle has 12.6 million followers, more than any newspaper in India boasts. He has a message out at every conceivable opportunity, communicating directly with people to tell them what he thinks is important, what his side of the story is.

These are the attributes I’d want in the ideal politician of my conception. And yet I wouldn’t want the four qualities to dominate the personality of the ideal politician, as these do Modi’s. This is because we have seen politicians of the past spawn hope for cynical ends, the will to power degenerate into absolutism, the daring into chutzpah, and an effective communicator change into a demagogue.

Intimations of these fears came through his recent rally at Mathura, where he exhorted the audience to recall what their past had been and compare it to the present. It was manifest in the questions he asked: “Are bad days over or not? Are bad deeds over or not? Is there any whiff of scam anywhere?”

In it was the subtext impossible to miss – the present could have been far worse than what it is and, therefore, thank Modi for it! This psychological handling of people is known as managing expectations, which is synonymous with hope. A consummate leader, in the manner of godmen and psychologists, reconciles people to their harsh reality.

But it can also be perceived as manipulation, for he isn’t asking people to testify whether good days are here. He is instead relying on lexical jugglery to have people recognise their achche din. Their bad days, or bure din, are over because they haven’t had the misfortune of living under UPA for one full year. In other words, they are either blind or stupid not to join the dots – for when bad days are over, how would you categorize their absence?

Perhaps a more honourable way for him would have been to list the problems the government is encountering – and request the people to be patient. But humility doesn’t come easy to him because he’s so strong-willed, so unwilling to bow down, not even before the people who voted him.

This is why Modi must play lexical tricks to convince people that good days have descended upon them, regardless of their own feelings about it. This is why he would prefer to have ordinances promulgated than opt for compromises in the Rajya Sabha. This is why governance under him has turned into a typical Bollywood tamasha, in which tweets masquerade as item numbers, alliterations provide comic relief, and constant reminders of the long hours he keeps at work, and the measures his government has taken, constitute the story of the hero.

But the impresario in Modi can’t convince in perpetuity. However ironical it may sound, Modi needs to temper the four qualities, learn not to overindulge, for the law of diminishing returns always operates.

(Ajaz Ashraf is a journalist from Delhi. His novel, The Hour Before Dawn, published by HarperCollins, is available in bookstores)