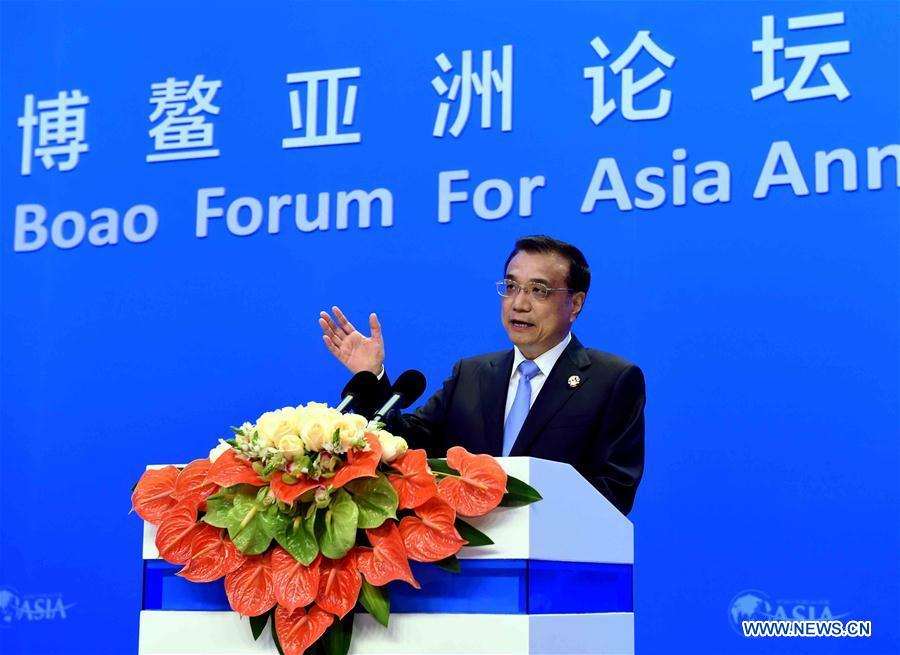 Li made the remarks during his speech at the opening ceremony of the 2016 annual conference of the Boao Forum for Asia, in China’s southernmost island province of Hainan.

Just like a high-speed train that is powered by multiple engines installed in individual carriages as well as the locomotive, China’s economy needs stable operation and multiple driving forces, Li said.

To achieve stable and long-term growth, China will work to improve its financial market and retool the economy to cultivate new engines, according to the premier.

China will reform the capital market and draft rules for debt-to-equity swaps, making it easier for lenders to convert bank loans into equity stakes of debtor companies, a move that would help ease the nation’s high debt levels.

To further open the capital market to global investors, “the government will launch the Shenzhen-Hong Kong Stock Connect within the year, when conditions are ripe,” said Li.

The program, which allows investors to trade on both bourses, within a limit, follows the Shanghai-Hong Kong Stock Connect program, which has yielded positive results.

China will actively foster new growth drivers while transforming and upgrading traditional ones so that they form “twin engines” that propel development, according to the premier.

He called for efforts to promote innovation and entrepreneurship, develop the service industry, high-tech industry, small and medium-enterprises and private businesses. Their development will support the transformation of traditional industries.

Effective investment in infrastructure, especially in China’s central and western regions, should be expanded, which is conducive to rural development, he said.

He said the government will work to “weave a safety net” that guarantees people’s livelihood in the five areas of employment, education, medical care, old-age care and housing.

The premier also called for stable and healthy development of the real-estate market to avoid fluctuations.

He spoke highly of the country’s booming tourism, citing the sector’s 19-percent growth in domestic tourist revenue last year over 2014, and 4 billion domestic trips and 110 million overseas visits in 2015.

He reiterated a minimum 6.5-percent average annual growth China eyes for the next five years, which has been written into the 13th Five-Year Plan.

The premier also reassured the world of the country’s flexibility to balancing reform and growth.

“The government will take measures if economic growth slips out of the reasonable range, as a loss of speed will be the biggest risk for the nation,” he said.

Further, Premier Li made a series of concrete proposals to promote Asian cooperation and development.

He also expressed the hope that Asia’s regional trade deal, the Regional Comprehensive Economic Partnership, can be reached within this year.

He reiterated China’s proposal to create a dialogue mechanism among Asian nations.

The upgrading and development of China’s economy means progress for China and opportunities for the world, Li said.

China will import goods worth more than 10 trillion U.S. dollars and invest over 600 billion dollars abroad in the coming five years, according to Li.

“Premier Li Keqiang has shown determination when tackling the challenges that the Chinese economy is facing as it shifts its growth model,” Dominique de Villepin, the former French prime minister, told Xinhua after Li’s speech.

“China’s change is under way. We see it with the rise of services and domestic consumption. But, of course, there is still a long way ahead. And the process of internationalization of Chinese investment will be key,” said de Villepin.