Need A Global Legal Regime to Deal with Terrorism: BRICS 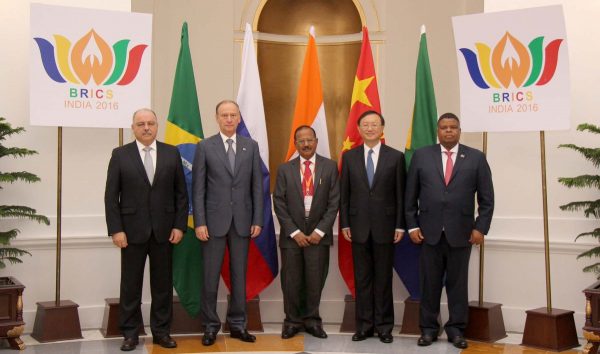 National security advisors of the BRICS countries have agreed to strengthen joint efforts on enhancing cyber security during a two-day meet in the Indian capital New Delhi that began on Thursday.

An emailed statement from the South African State Security Ministry said the security officials reasserted the positive contribution of the BRICS grouping on important global issues. The meet was aimed at taking stock of security issues such as counter terrorism, cyber security and energy security.

“They also exchanged assessments of recent developments in the West Asia and North Africa (WANA) region,” the statement added.

The BRICS officials also underscored the need for “a global legal regime to deal with the global menace of terrorism”.

The BRICS group sees the anti-terrorism collaboration within the bloc as a way to counter the threat of violent extremism emanating from the WANA (West Asia and North Africa) region.

The terrorism and barbarity of the Islamic State (IS), the militant group that has seized large parts of Syria and Iraq since 2014, has disrupted the peace in West Asia and beyond.

India has long faced terrorist attacks that it blames on Pakistan based militant groups such as the Lashkar-e-Taiba.

China says it faces a threat from Islamists in its far western region of Xinjiang, some of whom it says have received training overseas, including in Pakistan and Afghanistan.

The BRICS security officials on Monday agreed on a BRICS Forum “to progressively consolidate cooperation and exchanges among respective agencies in security related fields”.