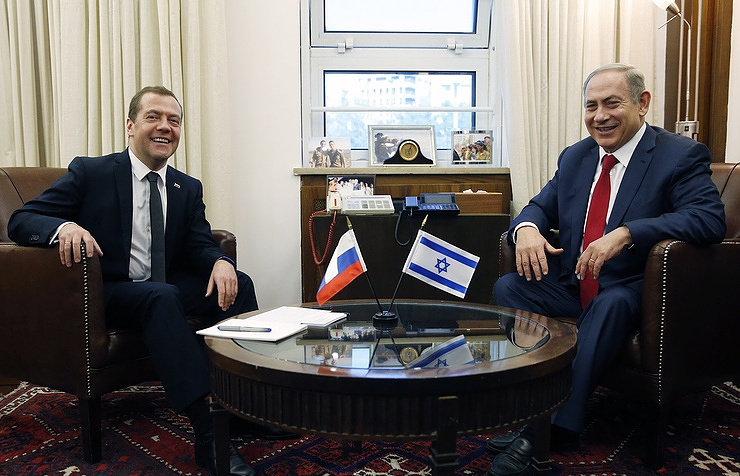 The establishment of a free trade zone between Israel and the Eurasian Economic Union was discussed at the talks between Russia’s Prime Minister Dmitry Medvedev and his Israeli counterpart Benjamin Netanyahu said.

“The creation of a free trade area between the Eurasian Union and Israel was discussed thoroughly, in detail,” he said.

Signing an agreement on a free trade zone between Israel and the Eurasian Economic Union would bring trade turnover, investments and technological exchange between the countries to a new level, Medvedev said.

“There are another forty agreements like this on the agenda, not all of them are in an advanced stage, some still exist only as an idea,” he said.

Medvedev said no final agreement on a meetings between the leaders of Palestine and Israel has been reached as of yet.

“As of yet, no final agreement to organize such a meeting has been reached. Nevertheless, we believe it would be useful and our country is ready to offer its mediatory services when they are needed,” he said. “Naturally, where it would be convenient for the two leaders, if such meeting is organized.”

Medvedev states with regret that the Palestinian-Israeli settlement is at a “zero” stage. He reminded that Russian President Vladimir Putin spoke about it with the leaders of the conflicting parties but no meeting between them had been ultimately organized.

The Russian prime minister said he had raised this issue at his talks with both Israeli Prime Minister Benjamin Netanyahu and with Palestinian President Mahmoud Abbas. “Both sides agree that a direct dialogue in needed and that it can be organized without preliminary conditions,” he said, adding that he regretted that no final agreement on such a meeting has been reached.

Medvedev stressed that efforts are continued within the format of the so-called Quartet of mediators (Russia, the United States, the European Union and the United Nations). In his words, there are a number of initiatives that can prompt the process and that need consultations.

According to the Russian prime minister, the opinion of other countries, including the United States, which has been demonstrating no serious activities in this sphere in the recent time, will be important in this process. Medvedev said he hopes that the new administration of the United States would intensify its efforts towards the Middle East settlement. “I would like to say it once again: we are going to continue our efforts,” he stressed.

« Rosneft Gross Debt Down 2.5% in 9 Months of 2016 to $46.3 bln Year-on-year» Russian PM Says Trump’s Victory Not to Affect Macroeconomic Forecast