Turkey assumed the G20 Presidency on the 1st of December, 2014. The Turkish Presidency will culminate in the Antalya Summit on November 15-16, 2015. We have pursued  an ambitious agenda and an intense work plan which, through collective action, has paved the way towards achieving the overarching aim of the G20: strong, sustainable and balanced growth. As such, Turkish G20 Presidency’s theme is “Collective Action for Inclusive and Robust Growth”. 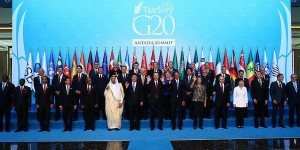 The first G20 Energy Ministers Meeting in the history of the G20 was held on 2 October 2015. In accordance with the priority attached to development issues in general and “access to energy” in particular, a High-Level Conference on Energy Access in Sub-Saharan Africa was also held a day before the Ministerial Meeting on 1 October 2015. During the G20 Energy Ministers Meeting, Ministers:

G20 Energy Ministers also came together with African Energy Ministers and institutional investors to discuss access to energy in Sub Saharan Africa at a high level conference held on 1 October 2015 in Istanbul. In these meetings, Ministers discussed a broad range of issues from energy access to renewables, from contribution of tourism to employment to challenges facing the multilateral trading system and better integration of SME’s into global value chains.

G20 Trade Ministers Meeting was organized on 6 October 2015 in Istanbul. Ministers agreed that trade continues to be an important pillar of inclusive economic growth. They decided to work together to develop policies in order to increase the growth in global trade.

G20 Trade Ministers  expressed their commitment to support a strong and efficient multilateral trading system where WTO is at the core. They also acknowledged that WTO Bali Package is a significant achievement and they underscored the importance of delivering a successful WTO Ministerial Conference in Nairobi.

Ministers also discussed ways and means of increasing coherence between RTAs and the multilateral trading system.

The unofficial meeting of Tourism Ministers was organized on 29-30 September 2015 in Antalya.

Activities of the G20 Engagement Groups:

Youth-20 (Y20) Summit was held in Istanbul on 16-21 August. More than 120 delegates from G20 members as well as representatives from Low Income Developing Countries had their deliberations and adopted the Y20 Communiqué which called on the G20 Leaders to set a “concrete, quantifiable and collective target on reducing youth unemployment”.

Under the Turkish Presidency, G20 countries have agreed to establish a new G20 engagement group, the Women-20 (W20), to promote gender inclusive economic growth. The W20 held its first ever Summit on 16-17 October 2015 in Istanbul with the participation of more than 500 participants and delegates from G20 as well as non-G20 countries. President of the Republic of Turkey H.E. Recep Tayyip Erdoğan delivered the opening speech of the Summit.

The B20 Conference was held on 3-6 September 2015 in Ankara with the participation of close to 1,500 representatives of the international business community from 61 countries. The B20 submitted its recommendations to President H.E. Recep Tayyip Erdoğan who attended the inauguration of the Conference.

The B20 and L20 submitted a Joint Declaration to the G20 entitled “Jobs, Growth and Decent Work”.

The Civil-20 (C20) Summit was held in Istanbul on September 15-16 with the participation of 450 delegates from more than 50 countries. The C20 has identified four issues of key concern: Inclusive Growth, Gender Equality, Governance (with a focus on International Taxation and Anti-Corruption) and Sustainability and developed policy recommendations corresponding to these areas. Deputy Prime Minister Cevdet Yılmaz, former Deputy Prime Minister Ali Babacan and Turkey’s G20 Sherpa Ambassador Ayşe Sinirlioğlu attended the final session of the C20 Summit to receive the Communiqué on behalf of the G20 Turkish Presidency and to respond to the C20 recommendations.

In order to provide a convenient platform as a conduit to voice the expectations and concerns of the SMEs to the G20, the World SME Forum has been established in cooperation with the International Chamber of Commerce.  The work plan of the Forum has been endorsed by the G20 Finance Ministers and Central Bank Governors in their September meeting and will be presented to the Leaders in Antalya.

Outreach Activities of the G20 Presidency

The Turkish Presidency also values direct outreach and dialogue with non-G20 countries, regional groups and institutions and will continue with an extensive outreach program through the year. An Inaugural Regional Dialogue with the Caribbean Countries and the 5th Annual Dialogue between G20 and members of the Commonwealth and La Francophonie were held in Washington on 13 and 14 April 2015. Turkey’s G20 Sherpa Ambassador Ayşe Sinirlioğlu was in New York from 20 to 24 April and in Bangkok from 26 to 28 May 2015 to address the UN General Assembly and UNESCAP (United Nations Economic and Social Commission for Asia and the Pacific) 71st Meeting respectively. Ambassador Sinirlioğlu also attended various other regional and international meetings such as St Petersburg International Economic Forum 2015 and Croatia Forum 2015.

The G20 Turkish Presidency has also held two separate side events on the margins of the Third International Conference on Financing for Development on 13 and 14 July 2015, entitled “Priorities of the Turkish G20 Presidency with Particular Focus on Development” and “Inclusive Business as Contributor to the SDGs Implementation”.

Another high-level side event was organised in collaboration with United Nations Development Programme (UNDP) on the margins of the UN Sustainable Development Summit 2015 in New York on 25 September. The side event entitled “G20’s Contribution to the Implementation of the SDGs” was co-chaired by H.E. Cevdet Yılmaz, Deputy Prime Minister of Turkey and H.E. Helen Clark, Administrator of the UNDP.