International Symposium on Development and Governance in the BRICS 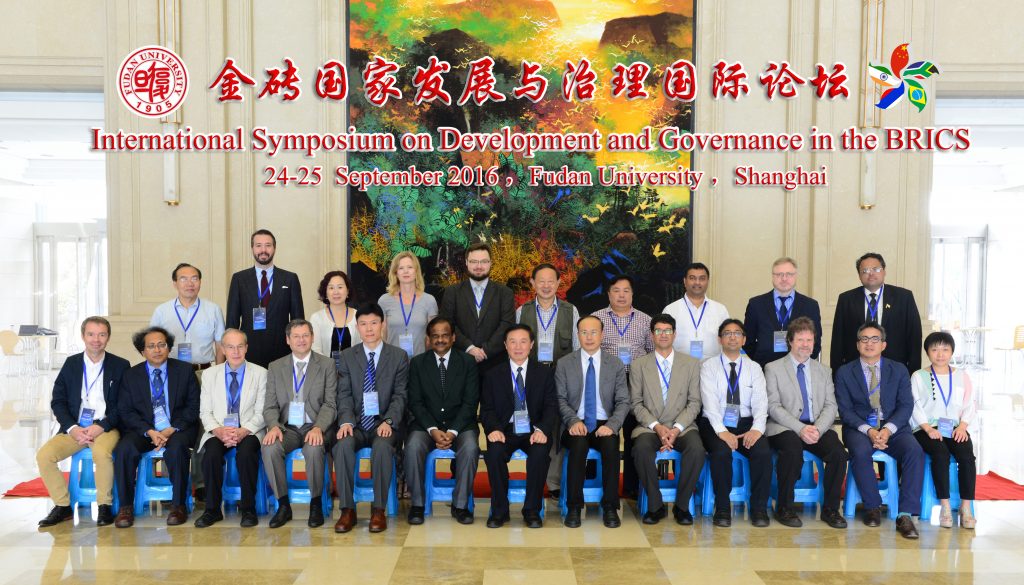 The First International Symposium on Development and Governance in the BRICS took place in Fudan University, Shanghai on September 24 and 25, 2016. The symposium was organized by the School of International Relations and Public Affairs (SIRPA), Fudan University (复旦大学国际关系与公共事务学院), The Dr. Seaker Chan Center for Comparative Political Development Studies (复旦大学陈树渠比较政治发展研究中心), the Foreign Affairs Office of Fudan University (复旦大学外事处暨港澳台事务办公室), the Center for BRICS Studies of Fudan University(复旦大学金砖国家研究中心), the China Society for Public Sector Reform (中国机构编制管理研究会) and Fundação Getulio Vargas (FGV) (热图利奥·瓦加斯基金会) of Brazil. It was also support by several publications, such as Chinese Political Science Review (Springer), Public Administration and Development (Wiley), Fudan Public Administration Review and Palgrave Series on Governance in China. The symposium counted with the presence of scholars from the five BRICS as well from researchers from other countries in Asia, Europe and North America. It was opened by Mr. Huang Wenping, President, Chinese Society for Public Sector Reform and member of the CPPCC National Committee, and professor Zhimin Chen, Dean of SIRPA, Fudan University.

Much has been researched about the economic and political dimensions of the BRICS, both comparing among themselves as well as the block as a whole. However, there is much less research on the public administration and governance aspects of those countries. Thus, this forum accomplished two main objectives. The first is to compile a series of research papers that can examine the state of governance and public administration on those countries to analyze the main challenges, similarities and differences in those countries, as well as possibilities of learning from each other. The second is to start to nurture a network of government officials and scholars in public affairs in the BRICS countries that can exchange information and engage in policy learning and joint research. The papers of the symposium will become a publication in an academic journal schedule to come out in 2017. This is the first of a series of symposia on BRICS to be organized in the next years. In 2017, the symposium will focus on BRICS and the new landscape of development aid.