Indian markets have been a consensus overweight among fund managers for most of this year; yet, the country’s contribution to world gross domestic product (GDP) is not yet marked to market.

Looking at the numbers another way, India’s market cap to GDP ratio is 68.4% at the end of 2015 compared with 75.9% a year ago. While India continues to command a higher valuation premium to other Asian markets, this has been coming down in recent times. So, one way of interpreting the data is to say that investors haven’t fully discounted the country’s growth potential. 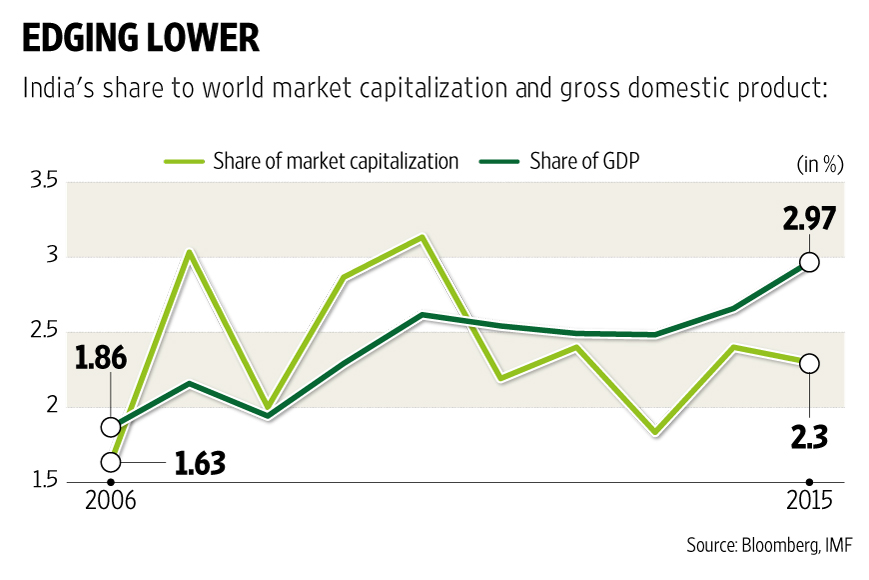 That said, the gap between market cap and GDP brings us back to the point that valuations aren’t perhaps as high as they can be despite the premium to other markets. Indeed, the gap between contribution of market cap to GDP has widened in recent times and is a far cry from 2007 to 2010 when India’s share of world markets was ahead of its GDP share. After that it fell, not surprisingly, as economic growth slowed and investment demand went into a tailspin. Now, with institutions such as the International Monetary Fund (IMF) predicting faster growth for India—as it is a key beneficiary of the oil price fall and relatively immune to the Chinese slowdown— there is scope for valuations to rise. But the suspect nature of the economic recovery which is not matched by a similar rise in corporate earnings seems to be a dampener.