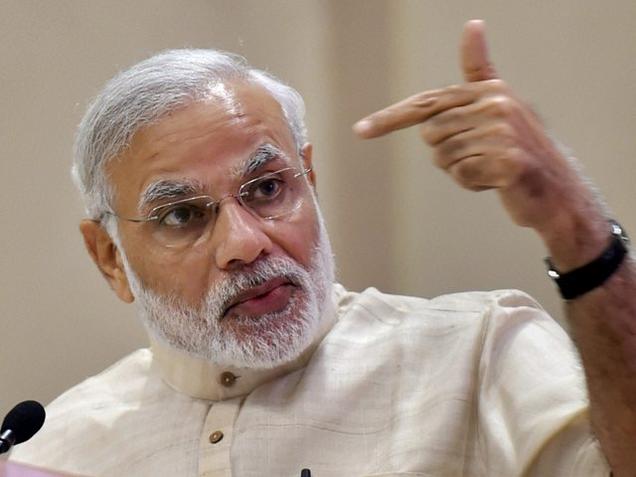 India is the only economy which has not been affected by the global economic crisis which has hit the world, primarily due to the policies being implemented by the government, Prime Minister Narendra Modi said on Sunday.

“Everyone is saying this… the World Bank, the IMF. The world is going through an economic crisis, but it is India alone that is progressing at a rapid pace. This is a unique situation when the whole world is slipping and India is growing,” Mr. Modi said at a function organised to mark the 140th birth anniversary of social reformer Dayanand Saraswati.

“People across the world are saying that the steps taken by the government (have led to) India becoming the fastest growing economy among the larger economies of the world,” he said.

“One thing can free us from our problems, from poverty, from lack of education and that is development,” Mr. Modi said, while referring to his government’s socio-economic programmes like Mudra and Skill Development.

“Over two crore people have benefitted through MUDRA Yojana and over Rs. 1 lakh crore has been disbursed to them.

Financial support has been given to people and we have faith in them,” Mr. Modi said.

Noting that 60 per cent of India’s population was below 35 years of age, he said India was the “youngest nation in the world.

“The government’s focus is on how to convert the power of the youth which can used for development of the nation.

Therefore, we not only launched a skill development programme for the youth but also created a new ministry, with its own budget and a set of officers to take the programme forward,” the Prime Minister said.

By 2030, when the population of many countries will grow old and when they require work force, India can power these nations with skilled and technically qualified manpower, he said.

“Apart from having certificates in their hands, our youth must be skilled,” he said and exhorted the youth to “pick up any one idea and work on it…let India’s strength at the world stage increase through that idea you pick.”

Observing that many people have said that 21st century would be India’s century, the Prime Minister said this century is the “era of knowledge” and India has always led the world in knowledge.

He called upon the youth to take a pledge to enhance India’s prestige in the world fora through their skills and knowledge.

“There is the public sector and the private sector. We want to introduce another sector — the personal sector. We want the people to be self—sufficient and self—employed to be become job creators and not job seekers,” Modi said.

Maintaining that his government had introduced schemes to make the youth and the people self—sufficient, he spoke of the Jan Dhan Yojana and said over Rs 30,000 crore were deposited in the accounts through this scheme.

“When we launched Jan Dhan Yojana and told people that they can open zero balance accounts, it was my desire that poorest of the poorer should have an account in the bank. 60 per cent people were without bank accounts. We decided on the zero balance account, but people volunteered and put Rs 5 to Rs 10 in these accounts and now Rs 30,000 crore has been deposited in the accounts through the Jan Dhan scheme,” he said, adding “this shows the richness of our poor people.”

Through such schemes, the poor can come out of the clutches of the rural money-lenders, he said.

Speaking about the formation of Arya Samaj in 1875 by Dayanand Saraswati, Mr. Modi said it had its roots in India’s First War of Independence.

“1857 saw the first War of Independence. After centuries of slavery, there was a new zeal and that too not a small one.

It did not restrict to 2000 to 5000 freedom fighters, but the entire country stood up.”

“However, the desired results were not achieved. When you see that background, you will then realise why Arya Samaj was established then,” the Prime Minister said.

On the Clean Ganga initiative, Mr. Modi said several governments in the past had tried to clean the river, but were not successful. However, “if people make up their mind, the mission can be easily achieved.”

“Many governments came and went while carrying out cleaning of Ganga, but could not complete the task of cleaning Ganga. If we decide not to allow degradation of Ganga then no power in the world can do it,” he said.