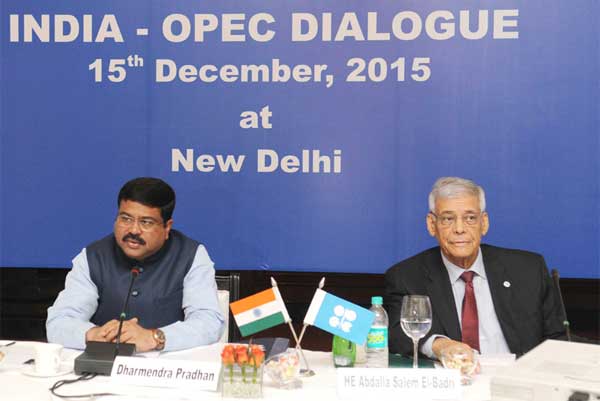 NEW DELHI: India on Monday sought a “reasonable and responsible” pricing from Opec, even as the cartel of oil exporting countries said crude’s prices could rebound from their current 11-year lows in less than a year.

“About 85% of our total oil and 95% of gas imports come from Oec nations. Opec has a major role in shaping oil prices and availability,” he told reporters after presenting India’s perspective on the oil market to Opec secretary-general Abdullah al-Badri under the India-OPEC Dialogue.

The cartel holds institutional dialogue with major consuming countries such as the US, European Union, Russia and China. This was the first such discussion with India.

“We gave him the perspective of major buyer of crude and market. We feel a reasonable and responsible price will best serve the world economy,” Pradhan said.

India – and other emerging economies that depend on oil imports — have benefitted immensely from falling prices since June 2014 as they had to spend less on crude shipments. But some of that benefit has been wiped out by the rupee’s sharp fall against the dollar, which too have along-term bearing on economic planning.

On his part, al-Badri said OPEC too was “looking for a reasonable price. He said Opec is not targeting a price but was looking for a fair value that meant “member countries can have a decent income and also where we can invest to (provide) more supply to the consumers”.

With low oil prices making several projects unviable, non-Opec production will decline by 400,000 barrels per day (20 million tonne a year) by 2016. “For Opec, we still can produce with the current price,” he said.

On impact of the US beginning to export oil, he said there will be no impact on the prices as it still remains an importing country. “They export some but they need to import the same quantity from somewhere else. May be they want to sell light oil… and they would like to import heavy crude. So the net effect of export from American oil on the market is zero.”

He said fossil fuels – coal, crude oil and gas, will continue to have a dominant share in the world energy basket with their share dropping to by only 2% to 78% by 2040 from current 80%.