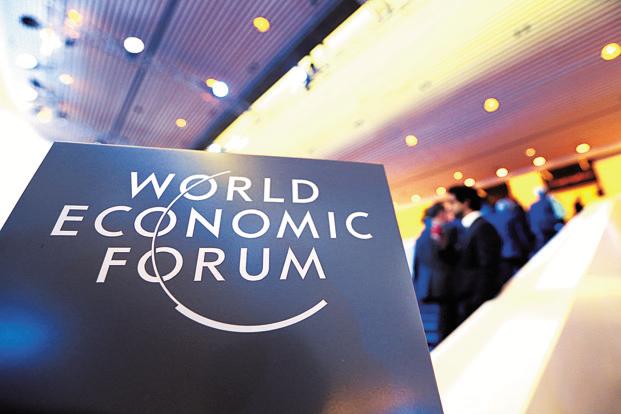 New Delhi: India has jumped 16 places in the World Economic Forum’s global competitiveness ranking, a result of the positive way in which the current government is viewed by investors.

The last was India’s best year. 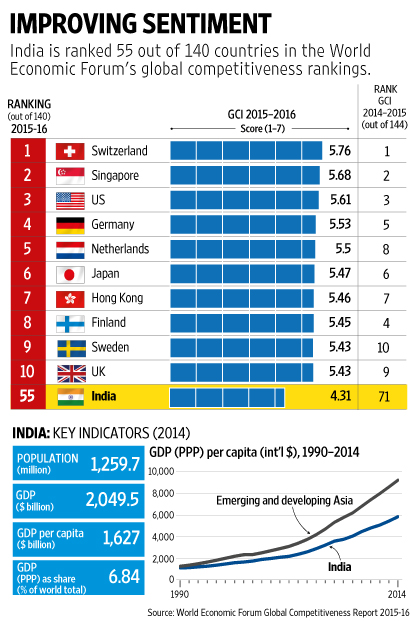 In its Global Competitiveness Report 2015-16, WEF said this dramatic reversal is largely attributable to the momentum initiated by the election of Narendra Modi, “whose pro-business, pro-growth, and anti-corruption stance has improved the business community’s sentiment toward the government”.

After taking charge in May last year, the National Democratic Alliance government has launched a drive to improve the country’s business environment, unveiling several campaigns (such as Make in India, to boost manufacturing; Skill India, to equip Indians with vocational skills), announcing swifter approvals for businesses; and moving towards a transparent and stable tax regime. It is also working on making it easy to do business in India and has said it will improve India’s ranking in the World Bank’s Ease of Doing Business rankings to under 50 in five years.

India dropped two places to rank 142 among 189 nations in the World Bank’s Ease of Doing Business 2015 study. The next study will be released in October. India expects its ranks to go up several notches.

Jaijit Bhattacharya, partner at consulting firm KPMG, said things have changed at a faster pace in the last couple of months, with the centre conducting the business reforms survey at the states level, and large businesses being able to set up business in 30-35 days which was earlier unheard of. However, though Bhattacharya expects India’s rank to improve in the Doing Business rankings, he added that areas like enforcing contracts (where India is ranked at 184 out of 189 countries) will keep its overall ranking low, as reforms in such areas fall under the judiciary where the executive has little say. 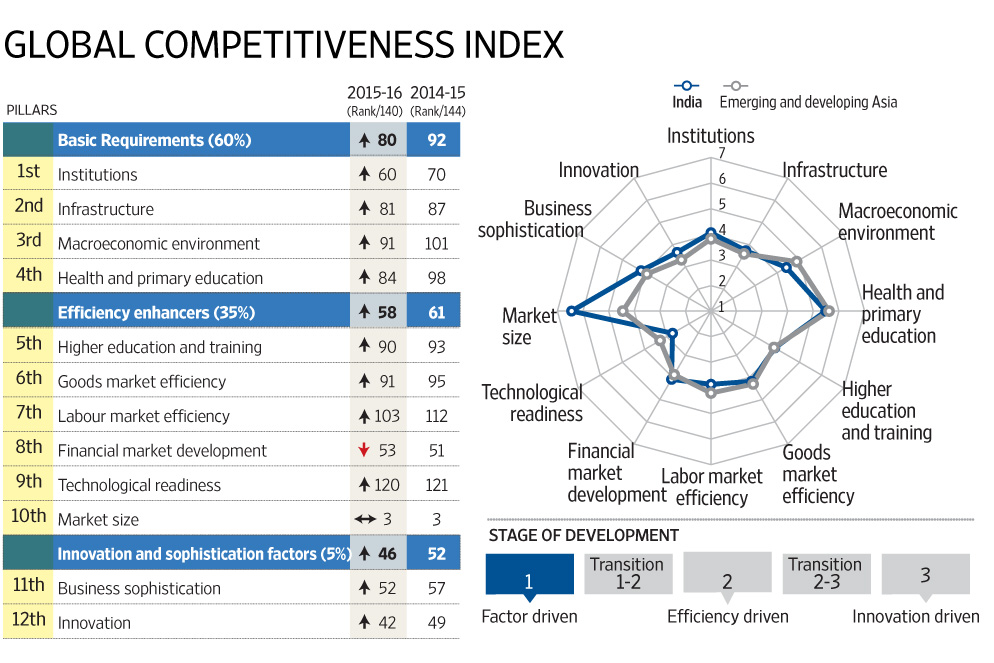 WEF said the quality of India’s institutions has improved (up 10 ranks to 60), although business leaders still consider corruption to be the biggest obstacle to doing business in the country. Other key problematic factors for doing business in India are policy instability and inflation, according to the survey which was conducted between February to June. 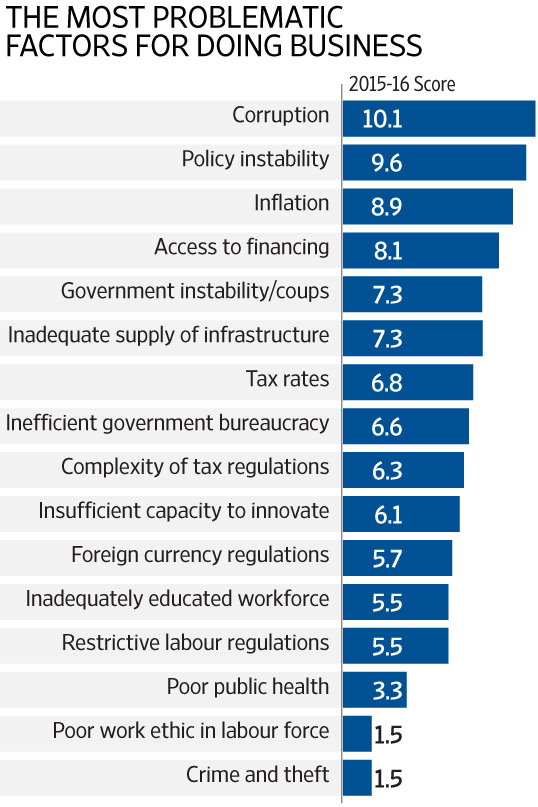 “India’s performance in the macroeconomic stability pillar has improved, although the situation remains worrisome (91st, up 10). Thanks to lower commodity prices, inflation eased to 6% in 2014, down from near double-digit levels the previous year. The government budget deficit has gradually dropped since its 2008 peak, although it still amounted to 7% of GDP (gross domestic product) in 2014, one of the world’s highest (131st). Infrastructure has improved (81st, up six) but remains a major growth bottleneck—electricity in particular,” the report said.

The Global Competitiveness Index combines 113 indicators that capture concepts that matter for productivity. These indicators are grouped into 12 pillars such as institutions, infrastructure and macroeconomic environment. These are, in turn, organized into three sub-indexes, in line with three main stages of development: basic requirements, efficiency enhancers and innovation and sophistication factors. The three sub-indexes are given different weights in the calculation of the overall index, depending on each economy’s stage of development, as proxied by its GDP per capita and the share of exports represented by raw materials. India is categorized as a factor-driven economy as its per capita income is less than $2,000.

The WEF report said the fact that the most notable improvements in India are in the basic drivers of competitiveness bodes well for the future, especially for the development of manufacturing sector. “But other areas also deserve attention, including technological readiness: India remains one of the least digitally connected countries in the world (up one rank to 120). Fewer than one in five Indians access the Internet on a regular basis, and fewer than two in five are estimated to own even a basic cell phone,” it added. 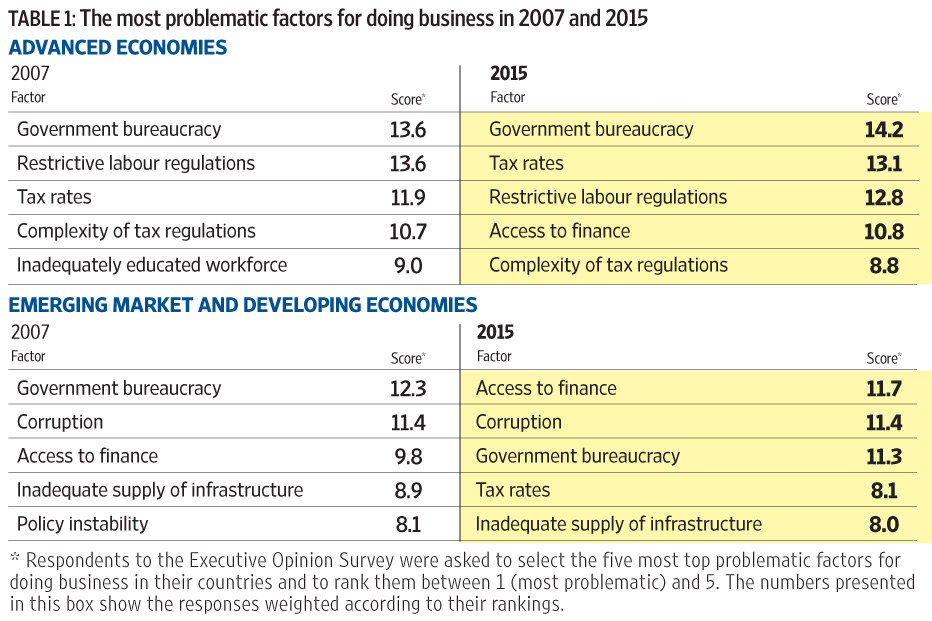 The government has tried to address this with the launch of its Digital India campaign on 1 July. Over the last weekend, CEOs of several technology firms reiterated their support to this.

WEF said seven years after the global financial crisis, the world economy is evolving against the background of the “new normal” of lower economic growth, lower productivity growth, and high unemployment.

“Although overall prospects remain positive, growth is expected to remain below the levels recorded in previous decades in most developed economies and in many emerging markets. Growth prospects could still be derailed by the uncertainty fuelled by a slowdown in emerging markets, geopolitical tensions and conflicts around the world, as well as by the unfolding humanitarian crisis,” it added. 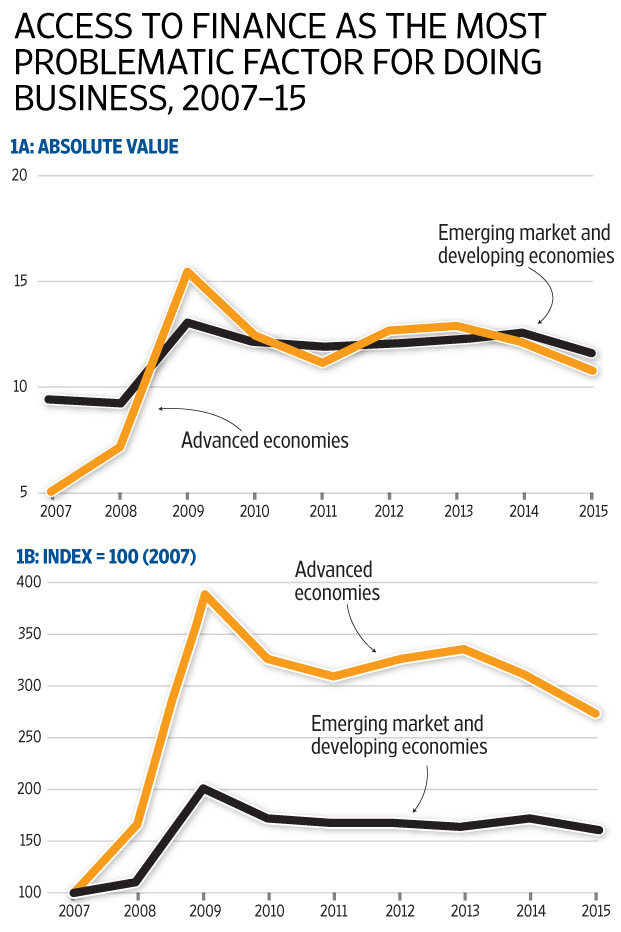 Rather than adjusting to this new normal, countries must step up their efforts to re-accelerate economic growth, the WEF report said.

“There is evidence that, in addition to lower capital accumulation that results from reduced investments, productivity over the past decade has been stagnating and even declining, which could have contributed to the current situation,” it added.