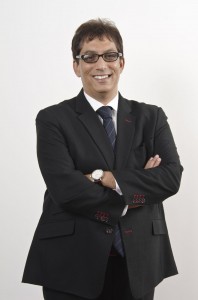 Born and educated in Cape Town, South Africa, Dr Surve is a medical doctor, trained at the University of Cape Town with a post graduate degree in sports science and a Fellowship from the American College of Sports Medicine. Prior to founding the Sekunjalo Group in 1997, Dr Survé was affectionately known as the “Struggle Doctor” as a result of his medical work with victims of apartheid and provision of medical care to a number of prominent South Africans after their release from Robben Island. In 1989, at UNESCO in Paris, he was honored by Amnesty International for his medical and ethical work with victims of detention and torture.   Sekunjalo Group and Sustainability Dr Iqbal Survé serves as Chairman of the Sekunjalo Group. At the Inaugural Annual Meeting of the New Champions held in Dalian China 2007, Sekunjalo was identified as one of the 125 Founding Members of the Global Growth Company community, described as the world’s fastest growing companies with innovative and sustainable leadership.   Sekunjalo’ s Innovation has seen it develop a sustainable business model with great relevance in South Africa resulting it being the only company of the JSE Top 200 to be the Financial mail/Empowerdex Top company on 3 separate occasions including 2012. He is also a board member of global multi -nationals including Siemens, Nokia, British Telecom and Saab’s African subsidiaries.   Global Sustainability Dr Surve is the Co-Chairman of the Advisory Board of the World Economic Forum Global Growth Companies, aka the New Champions. Dr Surve is also an Advisory Board member of the World Economic Forum’s Advisory Group on Sustainability and Innovation for the GGC as well as a contributor to the innovation report of the WEF.   Dr Surve is a founding Board Member of Siemens Global Sustainability Advisory Board, and is one of ten global experts that Siemens have identified, that will shape the Company’s future for Sustainability and Innovation. Siemens is ranked number 1 in Sustainability by the Dow Jones Sustainability Index.   Dr Surve was honored to be co-host for the Nobel laureates Symposium on Climate change at COP 17 in Durban South Africa in 2011 along with the Stockholm Environment Institute.   Dr Surve was appointed by President Clinton in 2005 to the Clinton Global Initiative Advisory Board on Governance and is a founding member of the Clinton Global Initiative. In 2010 Dr Surve was honored by President Clinton for his service to the Clinton Global Initiatives efforts to improve the world. On 5th December 2009, Mayor C Ray Nagin, bestowed a Special Day of Honor upon Dr Surve on behalf of the City of New Orleans in recognition of Sekunjalo being a World Class Company in an African environment. Sustainability in Academia /Educational Activities and in civil society   Dr Surve is Chairman of the University of Cape Town Graduate School of Business (GSB) Advisory Board.   During his Chairmanship the GSB has received international accreditation and is ranked by the Financial Times as one of the world’s top global business schools and the only South African business school to have reached this high ranking. More importantly GSB has pioneered Programmes on social entrepreneurship and innovation and climate change.   Dr Surve is Chairman of The Iqbal Surve Bursary Trust which has to date has sent more than 100 young South Africans from the poorest communities of SA, especially from rural areas to study medicine and health sciences. The first graduates are already working in their communities as health professionals. Sustainability in Philanthropy, Social Impact and Human Rights Activities   Dr Surve is a dedicated philanthropist who’s family foundation, The Survé Family Foundation is a trust committed towards the rights of children and young people in the world. Dr Surve established The Surve Family Foundation by donating a significant portion of his wealth to the Foundation a few years ago.   The Foundation initiatives include education, music, children’s and women’s rights, as well as the promotion of democracy and freedom amongst others. One of the largest funding initiatives of the Trust is a Swedish NGO, the World’s Children’s Prize for the Rights of the Child to support young children that are the victims of trafficking and conflict. Other major projects of the foundation include Youth Edujazz Programmes, Sports Academy Programmes in support of young people and Youth Leadership Initiatives. Dr Surve’s is Chairman for the last 12 years of TBP Ikapa an NGO involved in poverty reduction activities by supporting poor entrepreneurs with resources and support. This highly successful NGO has assisted 1000’s of entrepreneurs enabling them to step out of the poverty cycle.

Sekunjalo Investments Limited (“Sekunjalo” or “the Company” or “the Group”) is a majority black-owned and black-controlled investment holding company based in South Africa. The Group holds strategic investments, some with international partners as well as investments in Marine, Technology, Health and Biotherapeutics, Private Equity and Enterprise Development supporting Broad-Based Black Economic Empowerment (“BBBEE”) and Small, Medium and Micro Enterprises (SMMEs). Sekunjalo appoints the boards and management of all its subsidiary companies. It currently directly and indirectly employs over 2 100 employees, and over 11 000 people, predominantly in southern Africa, benefit through its investments and associated companies. Sekunjalo is a significant exporter and generates a large portion of income in foreign currency. Sekunjalo has a growing international reputation as a founder member company of the World Economic Forum (“WEF”) New Champions and Community Global Growth Company (“CGGC”), member of the Advisory Board of the Community of Global Growth Companies and the Green Growth Action Alliance (G2A2). Sekunjalo has strong BBBEE credentials and has been ranked as the country’s top most Empowerment Company in 2013, 2012 and 2010 by the Mail & Guardian/Empowerdex and Financial Mail/Empowerdex and the 2nd most Empowerment Company in 2011 by the Financial Mail. The Financial Mail/Empowerdex awards have also authoritatively ranked the Company in 2006 as the Top Empowerment Company and in 2004 and 2005 as one of the Top Empowerment Companies (2nd and 7th respectively) out of the Top 200 companies listed on the Johannesburg Stock Exchange. Sekunjalo also won the award in its sector in 2004, 2005, 2006 and 2010. Sekunjalo was a finalist of the 2011 Metropolitan Oliver Empowerment Awards in the Financial Services Category for Business Excellence. It is the empowerment partner of choice to many large and small businesses and enjoys solid investments with multinationals such as British Telecoms South Africa and Saab South Africa and partnerships with Siemens, Microsoft, Julphar and GlaxoSmithKline. As a BBBEE business, Sekunjalo has strong roots among historically disadvantaged individuals (“HDIs”) and community organisations. These form the majority of the Group’s shareholder base. Black ownership of Sekunjalo exceeds 90% and the majority of its economic benefits are enjoyed by black stakeholders. Sekunjalo is recognised by its peers as a pioneer in promoting the interests of HDIs and previously marginalised communities. The Sekunjalo Group has received numerous awards for its business performance and its achievement of real economic transformation for marginalised South Africans. The Group’s commitment to transformation, including employment equity, skills and enterprise development, as well as corporate social investment, makes it a role model for BBBEE.