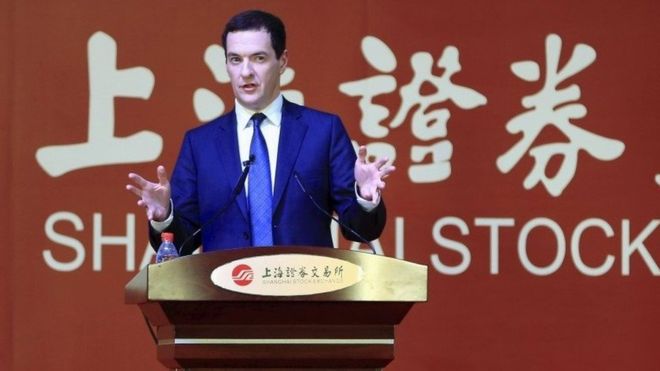 Chancellor George Osborne has set out an aim of making China the UK’s second largest trading partner by 2025, as he makes a controversial visit to a remote Chinese region.

Mr Osborne said Britain must “raise its game” to increase exports to China from £25bn (246bn yuan) to £30bn annually.

He is the first UK minister to visit Xinjiang province, in north-west China.

Campaigners have urged him to raise concerns about the treatment of the province’s Muslim Uighur minority.

Amnesty International said Uighurs had been subjected to “heavy-handed” security measures since an outbreak of unrest in 2009.

Xinjiang is the size of Western Europe and five hours’ flight from Beijing.

The area is important because it lies on the “new Silk Road” linking China to Europe by rail and road.

Mr Osborne has launched a report by the China-Britain Business Council and the Foreign Office to help UK businesses grow the market further.

He said: “China’s emerging regions, like Xinjiang, hold enormous potential in the years ahead.

“We are building an ever closer relationship with China – it’s a partnership that is set to unleash growth and help regions like Xinjiang, where we know investment can make a real difference, as well as unleash new growth back home.”

The chancellor said he had raised human rights issues privately with his Chinese hosts during his five-day visit.

He added: “Of course we’re two completely different political systems and we raise human rights issues, but I don’t think that is inconsistent with also wanting to do more business with one-fifth of the world’s population.”

There’s a reason why Western leaders have stayed away from Xinjiang before now. It’s one of China’s most politically sensitive areas – the centre of years of turmoil and violence.

Hundreds have died in bloody clashes between government forces and some members of the ethnic Uighur Muslim minority who oppose Chinese rule.

That continued opposition worries the authorities. In response, there’s been a heavy-handed security crackdown on Xinjiang.

Religious and cultural repression is a part of life. For example, many Uighurs are prevented from wearing headscarves or growing beards.

There’s an economic element to all of this too. Many Uighurs argue Han Chinese migrants are the only ones to benefit from the Communist Party’s attempts to boost the region’s economy.

Resentment has resulted in bubbling anger, and increased calls among some Uighurs to fight for Xinjiang’s independence.

George Osborne argues that it is better for the UK to engage in Xinjiang, in order to boost development there. However, there are those who fear those benefits will fail to reach all of Xinjiang’s population.