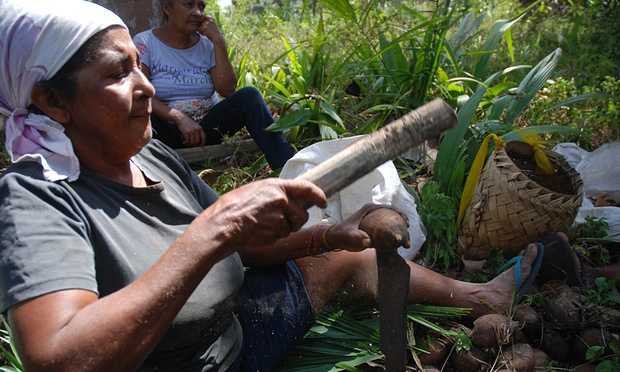 Tereza Teodoro Sousa balances what looks like a small, hairless coconut on a hatchet and cracks it open with a wooden truncheon.

“I can’t tell you how many years I’ve been doing this,” she says, sitting in a babassu palm grove in Maranhão state in north-east Brazil. “The babassu gives me everything. The bread I gave my children came from here.”

Tereza proudly calls herself a “quebradeira de coco babaçu” – babassu coconut breaker – who collects and cracks open babassu fruit to make oil out of the kernels. Over 100,000 families are estimated to depend on babassu for various subsistence purposes, and the income generated by quebradeiras from selling oil or other babassu products are crucial to many families’ survival.

“We do about two or three bags a day, take it home, heat it up and make the oil,” says Judite Teodoro dos Santos, sitting opposite Tereza. “Right now we’re just selling from our homes.”

Some quebradeiras turn the babassu mesocarp into flour or the shell into charcoal and sell that too, or join cooperatives and sell to fairs or a government school-food programme. Babassu from the quebradeiras ends up in bread, cakes, cleaning materials, cosmetics, drinks, handicrafts, margarine, porridge and soap.

This particular grove, owned by the Catholic diocese, is something of a sanctuary for Tereza and Judite where they can gather babassu without worrying about electric fences, rampaging cattle or men threatening them with shot-guns.

“This is the only place we come,” Tereza says, “so we don’t have any trouble here. This land belongs to the Fathers.”

Life for the quebradeiras – like so many people in rural Brazil – has been one long, often violent struggle. Huge swathes of babassu have been knocked down by cattle-ranchers or loggers, or for eucalyptus, teak, soy, sugar cane, palm oil and bamboo plantations, while more and more of the standing forests are being fenced off.

“The eucalyptus situation is so bad right now I can barely explain it to you,” Tereza says. “Where there was once babassu now there is eucalyptus. I can’t even tell you what that has done to our lives.”

While some quebradeiras have access to babassu because they own their own land following agrarian reform, many do not. Although Brazilian law allows them to collect babassu on private property in one state, Tocantins, and some municipalities in Maranhão and Pará, the quebradeiras say landowners ignore it.

“The law doesn’t work,” Cledeneuza Maria Oliveira, from Pará, told a press conference in Piauí state earlier this month. “They don’t allow us on their land.”

Ranching and monoculture plantations aren’t the only threats. The quebradeiras say babassu is knocked down to make charcoal to produce pig iron and steel, to feed animals and to make way for fish farms, or simply to make it impossible for them to carry on collecting. Another threat are companies commercialising babassu whose sourcing methods are unsustainable, the quebradeiras claim.

“It’s very sad what’s going on,” Maria Oliveira said in Piauí. “They’re destroying the babassu, they’re exterminating it. It’s the charcoal companies, the iron companies, and the ceramic companies that are using the nut as fuel. And now they’ve invented a machine to take the whole nut and crush it and turn it into animal feed.”

Things now stand to get even more difficult for the quebradeiras following a major government push to expand agribusiness in this part of north-east Brazil through the recent launch of an Agricultural Development Plan for a 73m-hectare area. The area is called “Matopiba”, as it overlaps Maranhão (hence the “Ma”), Tocantins (“to), Piauí (“pi”) and Bahia (“ba”).

The agriculture ministry describes Matopiba as the “new frontier for Brazilian agriculture” and “one of the main areas in the world for grain production expansion”, and highlights that soy, cotton and corn already grow there.

A government blogpost implies that expansion into Matopiba will take place “without deforestation”, yet this is Brazil’s – and the world’s – richest babassu region.

Alfredo Wagner, an anthropologist from Amazonas State University, estimates there are 18m hectares of babassu in Matopiba. At the Piauí press conference Wagner held up government documents about Matopiba and said they “show a completely open field into which agro-industry can go. There’s nothing and no one there. As far as the government is concerned, there are no babassu.”

Many quebradeiras are deeply concerned about Matopiba. “Agro-industry isn’t going to help us,” says Francisca da Silva Nascimento, general coordinator of the Inter-State Movement for Babassu Coconut Breakers (MIQCB). “Our babassu forests are at risk of extinction.”

The Piauí press conference launched a map of what Wagner and other researchers call the “babassu ecological region” stretching across Maranhão, Tocantins, Piauí and Pará. The map was produced by the “New Social Cartography of the Amazon project” and involved collaborating with approximately 900 quebradeiras.

“This gives us a chance to prove we exist and the babassu exists,” Maria do Socoro Teixeira Lima told the conference. “We’re going to make Kátia Abreu [the agriculture minister] swallow her paper. We’re going to take this map to Dilma Rousseff [the Brazilian president].”

According to Wagner and Maranhão State University economist Benjamin Alvivo de Mesquita, the overall extent of babassu in north-east Brazil has increased since the 1980s. However, the extent of areas inhabited by the quebraderias has dropped significantly, accompanied by a decline in the babassu trees in those areas.

The ministry of agriculture did not respond to questions.